Due to the bumbling bureaucratic micro-managed inefficiency of "they who shall not be named" at work, I had a very odd day today, sitting waiting on someone to do their job, so I could do mine! This did allow me to snatch some odd moments to slap some more paint on some Coldstreams and base the Mohicans and some Rogue Trooper figures from Mongoose. Nothing finished, but hopefully (SWMBO permitting) the Coldstream pike may get finished this weekend.

Last night I downloaded a "lite" version of Shenandoah Studio's iOS Battle of the Bulge game into the iPad. I'm not a great "computer gamer", FIFA 13 is my limit, but this looked interesting and it was soon 1.00 am before I realised the last several hours had gone! 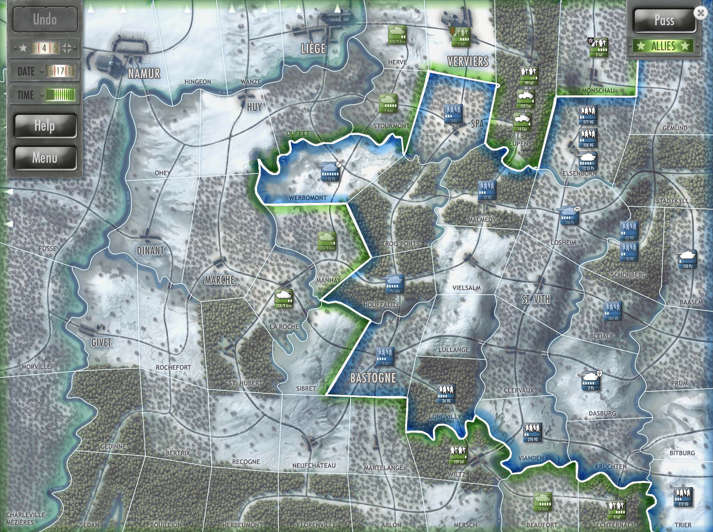 The game is campaign level, with the basic units being divisions and can be played against a human opponent or (more usefully for me) the computer. I had several cracks at the free scenario and at best managed a draw against the computer lead Americans, more often my Panzers failing to reach the Meuse (to win) or take Bastogne (to draw). There are a number of interesting aspects to the game, including keeping your supply lines open and I have just downloaded the full game so tonight should see General von Blease trying to succeed where Generalfeldmarschall Model failed!

Shenandoah have released a companion Barbarossa game that looks interesting and have an El Alamein one in the works. Whilst it hasn't the attraction of toy soldiers, the games look like they will be a fun distraction for nights sat in the car on Dad's Taxi duties...
Posted by Steve at 18:26:00