Having had great fun with Shenandoah Studio's Battle of the Bulge iOS game on my iPad I decided to have a look at the second game in the series Drive on Moscow. As it is currently on sale at £2.99 I bought a copy and last night invaded Russia! 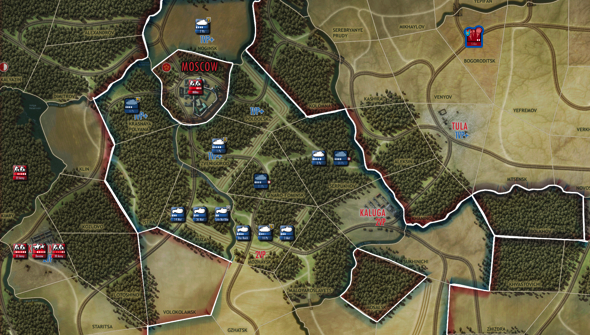 Like Battle of the Bulge this is a great little game, albeit with lots more units and different problems to face, including the changing weather. The use of supply is really important and cut off units grind to an ineffective halt, you can also pin enemy units making them ineffective by surrounding them, a useful tactic for tying down quality enemy units.

Great fun, Shenandoah have two new titles coming soon, another WW2 title in the form of El Alamein and an ACW based around Gettysburg. Based on the two I've played I think I'll be buying both...
Posted by Steve at 18:01:00