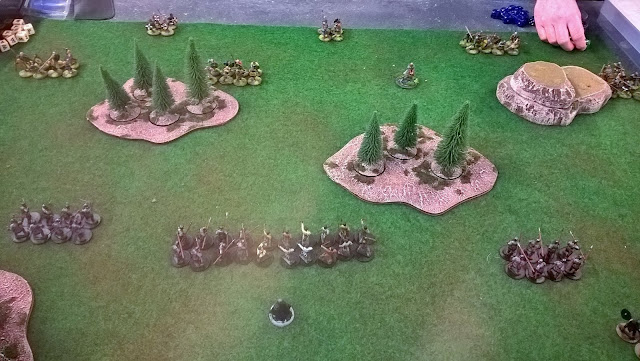 I didn't have time to get in a game of What a Tanker! but watched Matt and Jim playing and it look at lot of fun so I signed up to the forthcoming Tanker Day at BIG at the beginning of May.
Posted by Steve at 23:26:00 2 comments:

Spitfyre includes air-to-ground attacks (and AA fire) and initially Rob and I thought it would be cool to get one of the artists to paint some targets for people to print off for games. For one reason or another that didn't go ahead but as I wanted to show ground targets in the rulebook I needed to come up with something else. 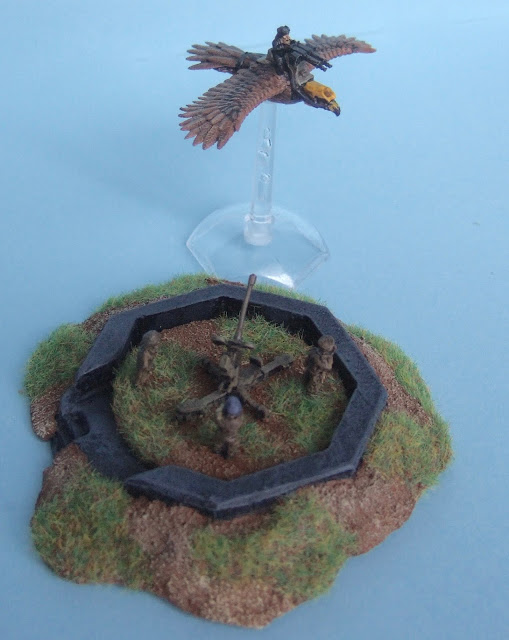 In the end I bought some of Pendraken's 10mm WW2 British infantry, a Bofors gun and emplacement and a command bunker.

The infantry and Bofors crew I painted up historically. Albeit with green orc faces. When Hysterical get around to producing their 10mm Panzerfäuste game I can repaint the flesh and use them as historical BEF troops for something or the other.... 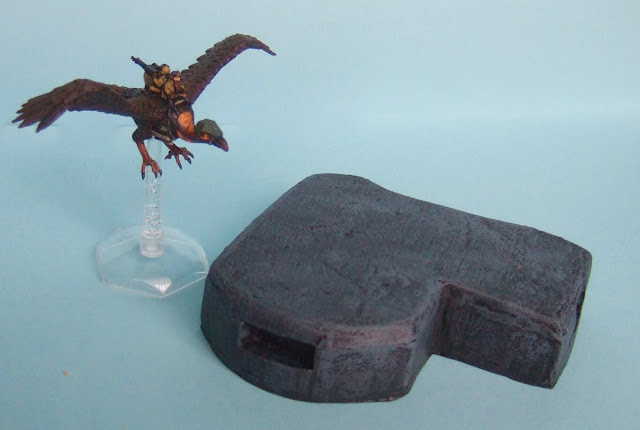 In the end the bunker did not end up in the rulebook, but it was fund and quick to paint.

I got so engrossed with getting the Spitfyre rules reading for printing, the PDF issued to Kickstarter backers, real work and a nagging toothache that I almost forgot the blog today! But here are the Dwarf air force Stukas, sorry Vulture Dive Bombers! :-) 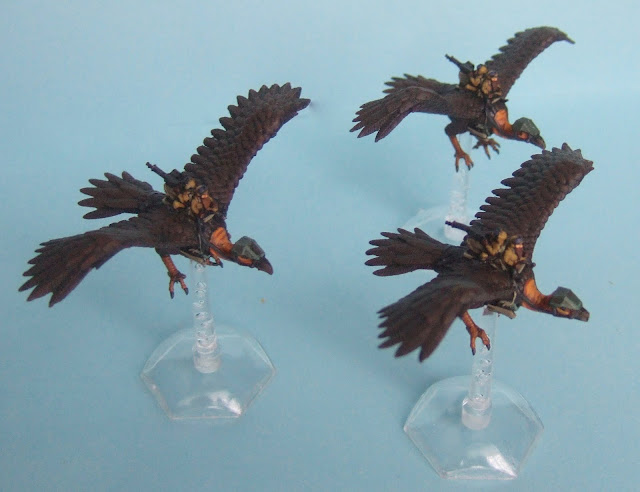 I had lots of "fun" researching colour schemes for the vultures, who knew there were so many breeds! Word of warning though, Googling vulture images whilst eating your breakfast is not recommended! 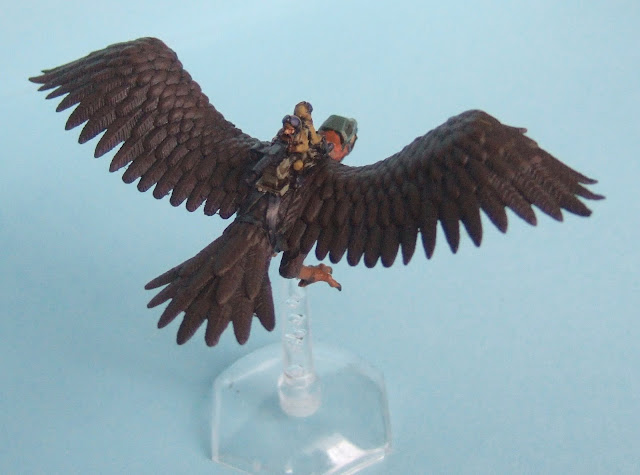 I think Darko has done an amazing job on these models, capturing the vibe of the Stuka in a bird! I want one in 28mm now... :-) 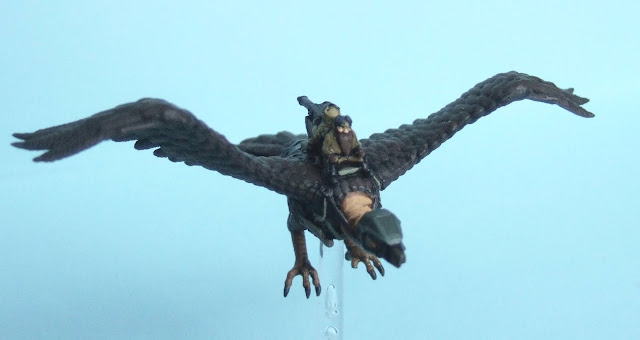 If you are interested in checking out the game, Hysterical Games will have a demo of it at Salute on Saturday and have said they will have some stock of the game and first models of the range...

The great thing about the success of the Spitfyre Kickstarter was the funding of miniatures that I thought would only ever exist in my head, such as the Dwarf air force Kondor 111 bomber! 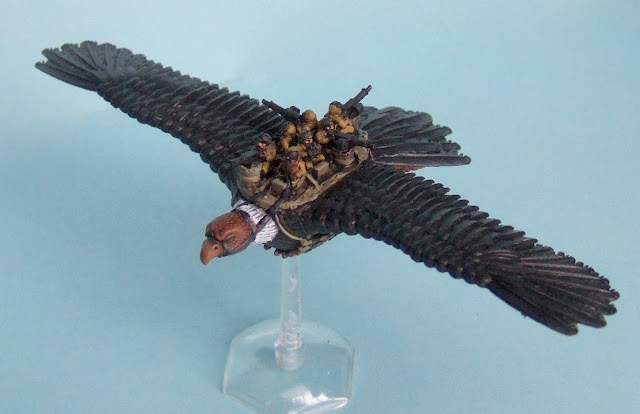 This is a very impressive model and I guess if it wasn't produced in a light resin I'd have had problems basing it. 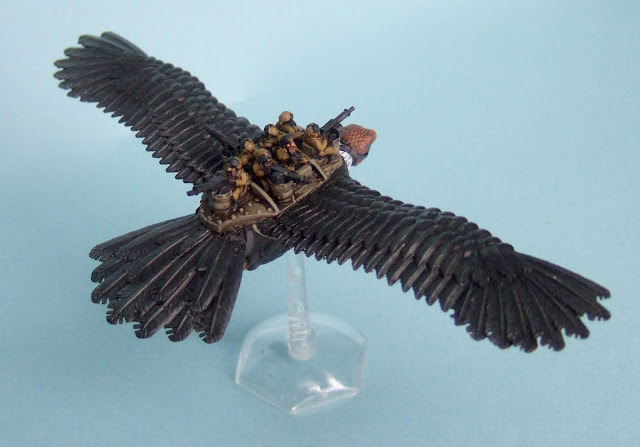 As you can see comparing it to the HurriKane fighter wyvern , it is quite big! 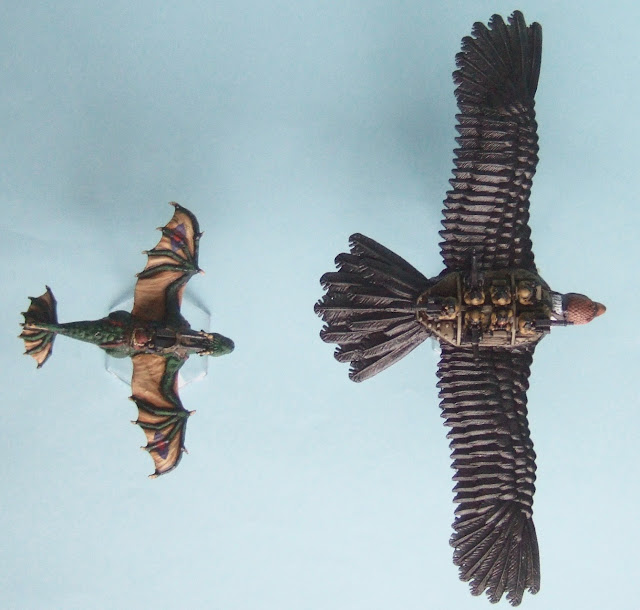 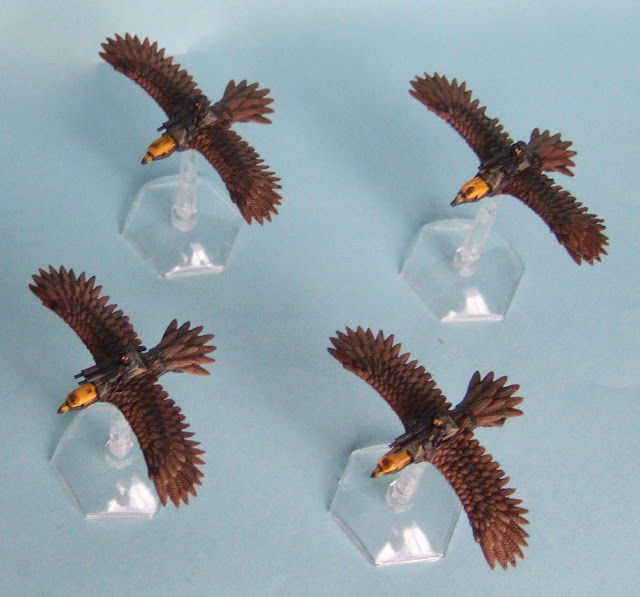 I love the helmets sculpted on the eagles (to protect against lucky enemy shots) which I have painted yellow like historical Bf109's... 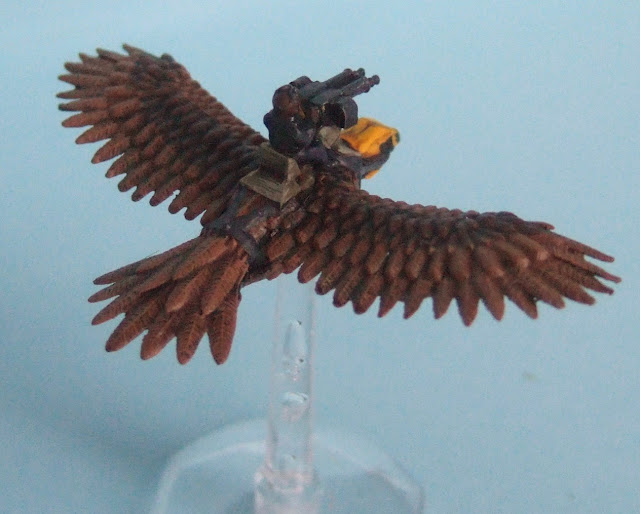 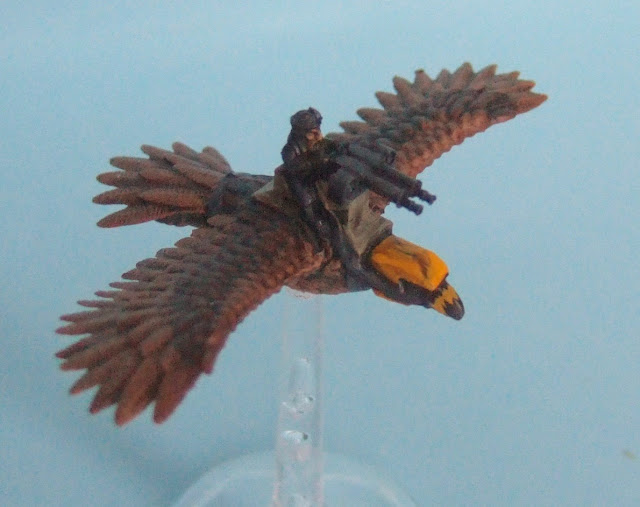 Managed to finish a flight of Orc Air Force SpitFyre wyverns this lunchtime... 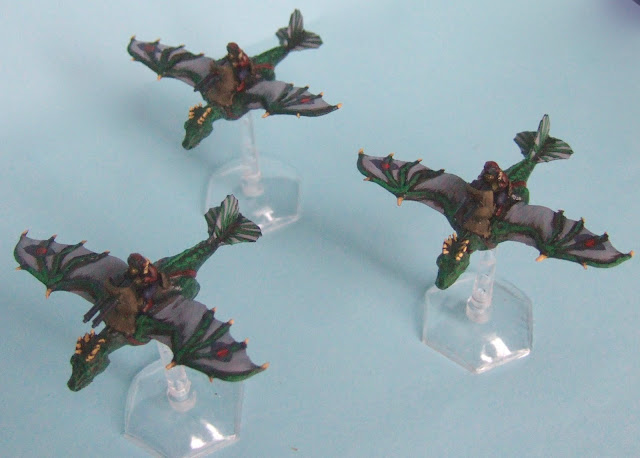 Rather than copy the same paint scheme as the HurriKanes, I decided to paint the wing membranes grey as a nod to the mid to late war RAF grey/green camo... 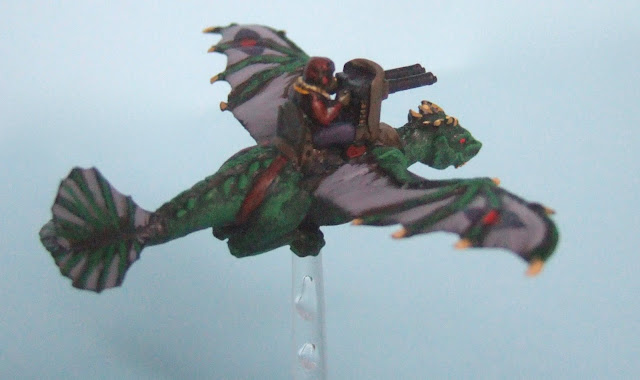 Like the HurriKanes hough I painted the 'Eye of Balor' on the wings! :-) 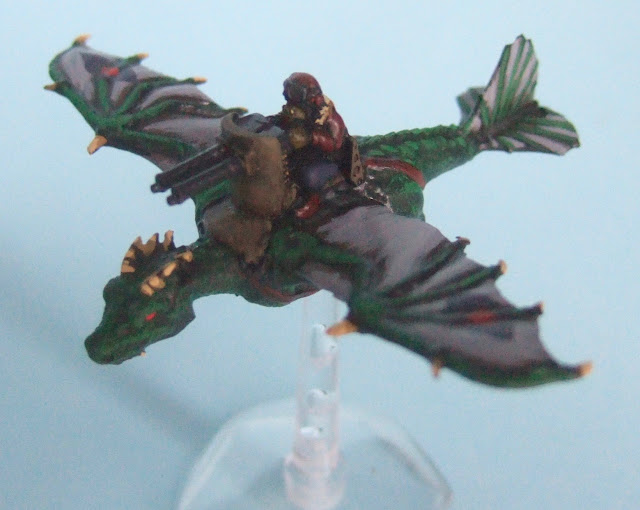 Lovely models, I'm sure my painting doesn't do them justice. 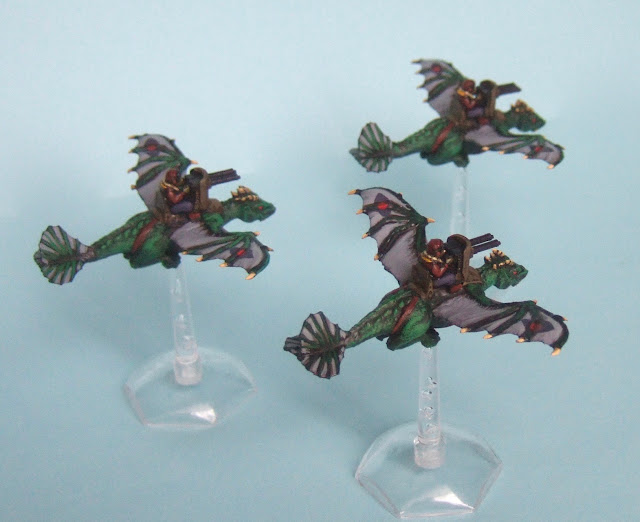 Onto the Dwarves next, the KriegAdler and KampfKondor are part way done now and I've just got the KampfGeier dive bombers to start.

Full speed ahead on the Spitfyre painting today. The Orc Air Force SpitFyre wyverns are almost done and I have completed a flight of HuriKane wyvern fighters... 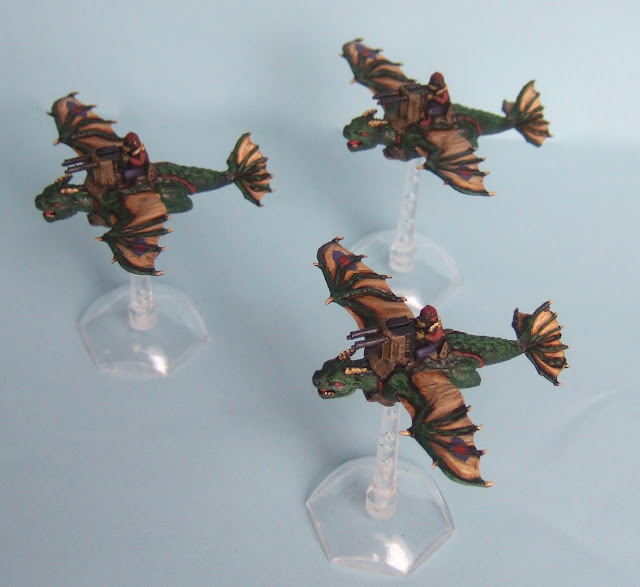 I based the painting scheme on that which Will did for the Spitfyre Kickstarter concept art... 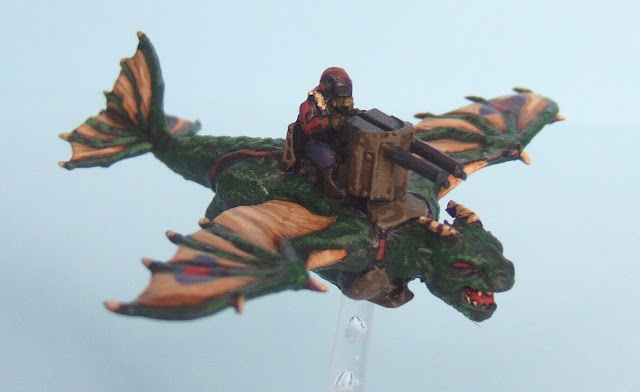 I think the contrast between the green dragon body and the buff wing membranes works nicely. 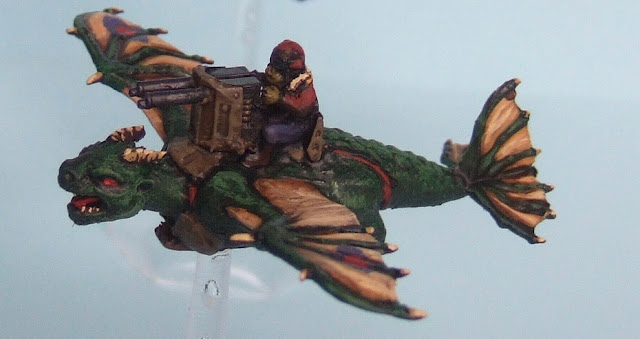 Many Orc Air Force pilots paint the "Eye of Balor" on the wings of their steads to give the evil eye to any enemies approaching from behind... 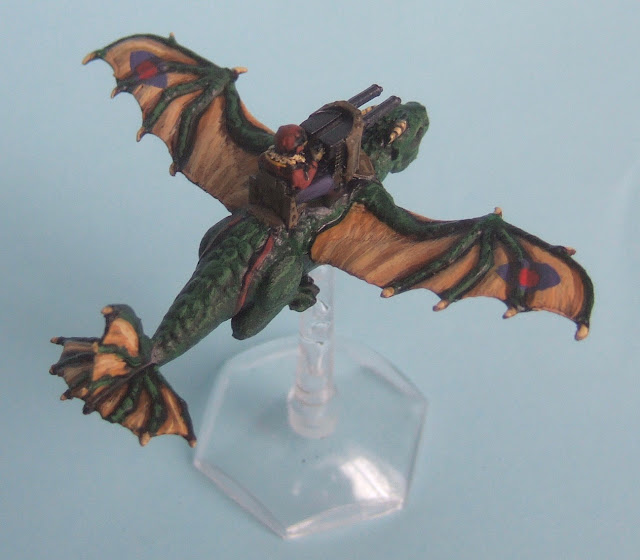 I need to get the Spitfyre rulebook to Rob by Monday for it to be printed in time for Salute. It's all laid out and just needs the photos done, so I need to pull my finger out with a paintbrush! 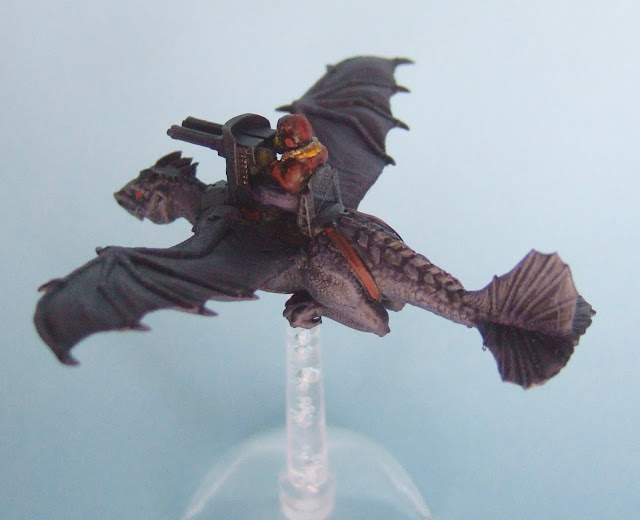 I've started the Orc Air Force SpitFyre and HurriKane wyverns which are all in base painted or wash stage drying on the windowsill at the moment. 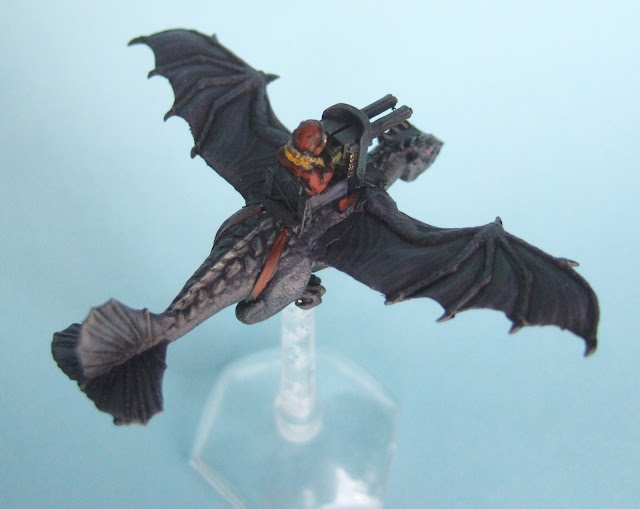 However as I has a spare SpitFyre I decided to paint one up as a night fighter dragon, some kind of rarer black skinned breed used to thwart any nefarious Dwarven attacks at night! 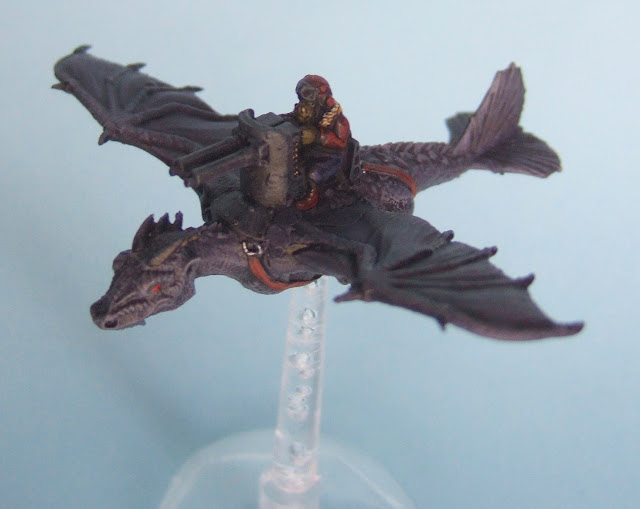 There are no night fighting rules in the game as yet, but as the Kickstarter requires a supplement to be produced this might be something to look into... 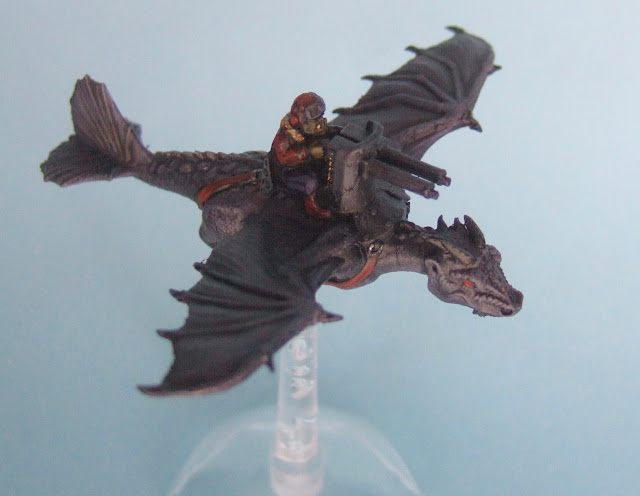 As he was largely a drybrush up from the black undercoat it didn't take too long to finish him. I have to say I am impressed with the detail on the model, Darko did a great job sculpting them, you can even make out the teeth on the Orc and his thumbs on the twin Vickers guns (remember the models are 10mm scale!)
Posted by Steve at 15:27:00 No comments: 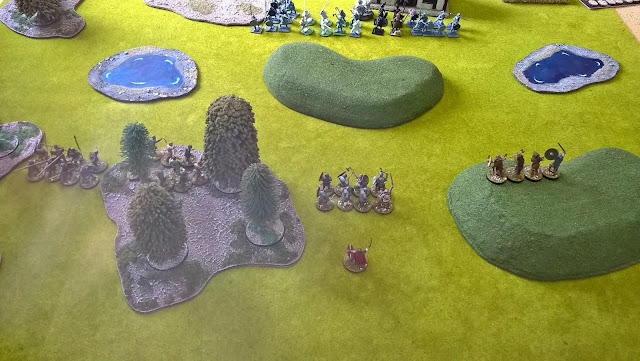 I stuck together the dragons of the Orc Air Force today for Spitfyre...

Hopefully get a chance to slap some undercoat on tomorrow and maybe some paint...
Posted by Steve at 16:45:00 1 comment: