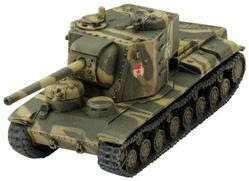 Unfortunately I have been bitten by the "ohh shiny" bug and Santa bought me a present that will kick start a new project in 2010 - 15mm WW2 Eastern Front!
Over the years I've played WW2 in 20mm and 6mm but, despite a rash purchase of some 15mm Peter Pig 1940's French infantry at Fisticuffs a few years back (still unpainted), had managed to resist the lure of 15mm WW2 - until Battlefront released the Mid-War Monsters range for Flames of War... 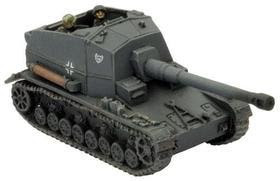 I don't know why but I can't resist hypothetical and experimental designs and Santa was very kind and brought me a box of Kv-5's (to which I have added
a box of Dicker Max). The models are really nice and I can't wait to shake off the racking cough I've caught from SWMBO to make them up and paint them. I have decided that I am going to restrict myself to 1942/3 Russian Front for a number of reasons, but mainly because the German stuff is still field grey and I'm bored painting three-colour camo. I'm also going to try and restrict myself to finishing a unit before I buy another so despite the temptation t buy a Soviet Naval unit I am determined to resist until both the Kv-5's and Dicker Max unit are painted up. This should mean that I do not end up with loads of unpainted lead and resin being added to the existing mountain of unpainted lead, resin and plastic - well, it's a plan...
Posted by Steve at 16:15:00 1 comment:

You can't beat a good film on Boxing Day, so here for your entertainment is a often overlooked black and white classic from 1940; The Lord Of The Rings starring Humphrey Bogart as Frodo, Sydney Greenstreet as Gandalf and Marlene Dietrich as Galadriel.
Posted by Steve at 10:45:00 2 comments:

Email ThisBlogThis!Share to TwitterShare to FacebookShare to Pinterest
Labels: Tolkien 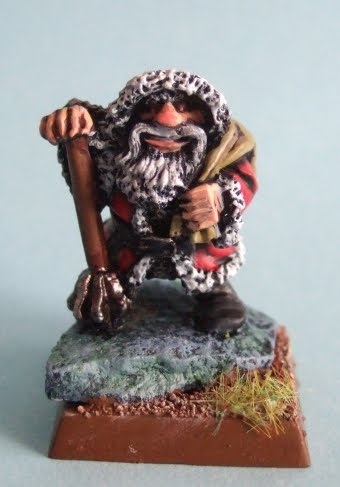 Compliments of the season to you all and here's hoping you were on Santa's "nice list" and that he brought you the wargames goodies you asked for...
Posted by Steve at 00:16:00 1 comment: 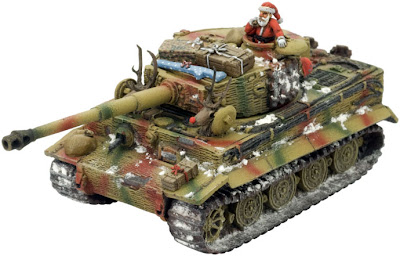 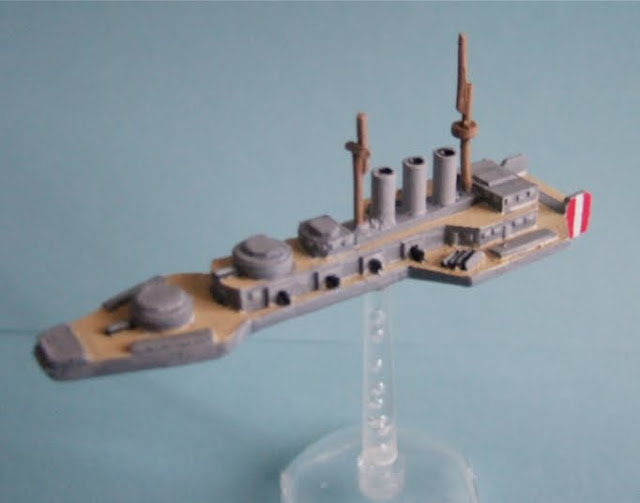 Despite the usual festive demands I managed to finish SMLS Syren today. After some contemplation I went with the Austro-Hungarian Navy overall pale grey look including grey funnels. Whilst quite drab compared to other fleets, I do quite like it and the thought of raising a small k.u.k Aeroflotte is now lodged somewhere to the fore in the brain...
Posted by Steve at 14:08:00 3 comments:

Bit of a busy day today finishing off a scenario for Orcs In The Webbe's Advent Calendar (Sharke's Panzerfaust should be uploaded tomorrow I believe), doing some artwork for next year's Bristol Beer Festival and taking Saul to see Avatar in 3D...

Unless you have been living in a hole on the Moon (probably a moon of one of the outer planets) you'll no doubt be aware that this is James Cameron's return to box office film making with all the hi-tech gizmos and effects he's renown for, oh, and it's in 3D...
The film will no doubt have its critics, it is for all intents and purposes an SF Dances With Wolves, but IMHO that is no bad thing. The CGI is very well done and for the most part the 3D works well without the usual silly effects of things flying into the audience. Indeed, it is at its best when it just looks natural. The night time scenes in the jungle are mesmerising and the military hardware reminiscent of that in Aliens, the VTOL's are cool and the Starship Troopers-esque walkers got me thinking about using 15mm scale robots with 6mm SF troops. Indeed, the scale of some of the equipment in the film did start me think about using ostensibly larger scale vehicles in 6mm (15mm grav tanks for huge Bolo like cybertanks perhaps?).
Anyway, well worth a trip to the cinema. Hunt down a 3D showing. I'm sure the 2D looks great but the 3D is an experience that, once you get into the film, should not be missed if at all possible...
Posted by Steve at 21:38:00 3 comments:

In The Bleak Mid-Winter...

As you can see from the photo I took out the study window this morning we didn't lose out as Bristol received a scattering of snow last night. Not enough to cause major problems (least of all to me who is working from home, Saul who is watching The Red Baron or SWMBO who is in bed with the dreaded lurgy!). 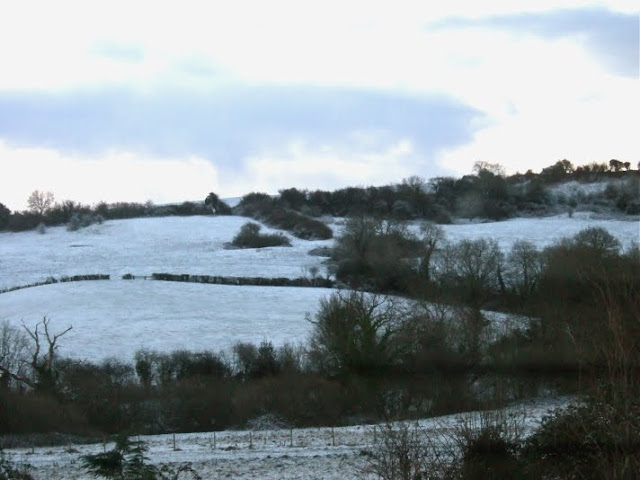 The hill is called Maes Knoll and apparently is a small old Ancient British hillfort, as well as one end of the Wansdyke, a line of small forts to keep the Saxons at bay in Arthurian times (allegedly). Whatever it is a nice view, though there are plans to stick a bypass across it (building it two hundred yards south on the flat fields beyond the knoll seems beyond those that makes such decisions...).

I have managed to do some painting today on the Syren, but as the games room is the only room in the house without central heating it's been like painting in the freezer section of a supermarket. Still she should be finished tomorrow...
Posted by Steve at 13:41:00 1 comment:

Wrath Of The Syren

You may have seen on Bertie's Blog that Wessex Games will be releasing a free Aeronef PDF campaign book in the very near future. The three scenario campaign is centred around the adventures of Baron Lantoz and his ship the SMLS (Seiner Majestät LuftSchiff) Syren against the Turks. 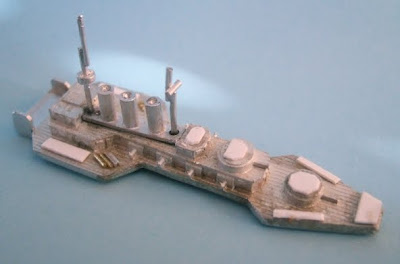 For the accompanying photos I have David Crook's scratchbuilt Turkish fleet but needed a model of the Syren. Brigade came to the rescue with their Budapest class light battleship which is a lovely model. The Syren itself is an enhanced design having been refitted by Hungarian genius Professor Vanvlak so I have added some more (plasticard) armour and doubled the rocket tube mountings to make it clear it is a non-standard design.
Hopefully I'll be able to undercoat it today, but as the temperature is still below freezing outside my plans may be thwarted...
Update: temperature crept above zero so quick undercoat done...
Posted by Steve at 10:41:00 5 comments:

Death In The Snow - The Undead 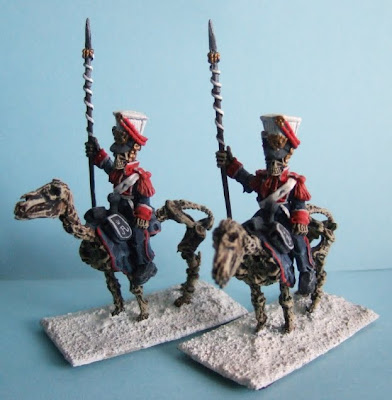 As promised here are some photos of the Deadloque undead. They were part of a large undead contingent used in a participation game at Salute many moons ago. The game was a rolling one with players taking a section of elves and trying to get across the length of the table with the undead units being randomly generated. A lot of fun was had by all though the appearance of the undead lancers always caused panic amongst the elven players!
The skeletons were an old wash/dip technique with sepia brown oil washed thickly over pale sand or ivory enamel. The effect was pretty good although the oils did take a good 24 hours to dry.

The zombie infantry (above) were pretty straight forward but like the elven infantry shown yesterday some of my favourite Deadloque scults by Mike Owen. The Vampire officer is ok, but was too short a model compared to the zombies and in my opinion lacks presence... I was less taken with the "Fleschless Legion", undead dwarves (below) though they painted up nice and added a splash of colour. 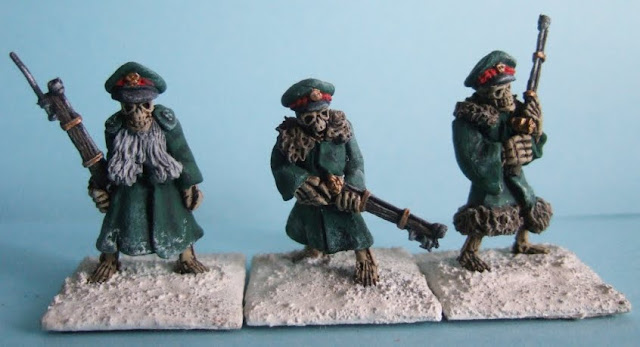 The undead peasants were nice models, a little smaller than most of the Flintloque range as I think they used standard 28mm skeletons from the AA fantasy range as the basis for the models. Whilst I really hated the concept of undead peasants in Deadloque (and the short story produced by AA that had them harvesting wheat in the summer - why? It was a Empire of undead ruled by Vampires! Who ate the bread?!!), the models were fun to paint. 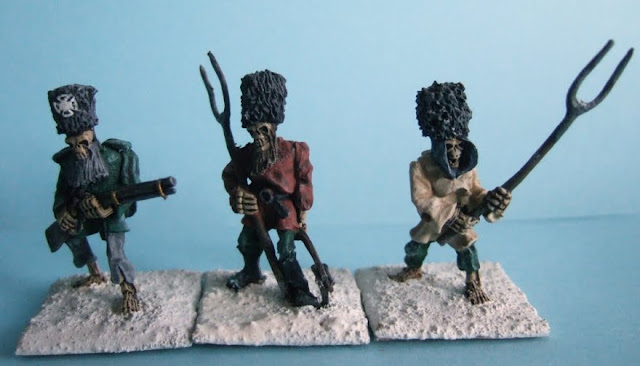 Finally the game at Salute needed lots of wolves and I added to the AA models with a variety from various manufacturers to beef out the two packs I needed.

Death In The Snow

As most of England is under six inches of snow I have to report not a flake in sunny Bristol (much to Saul's disappointment) though it is bloody freezing!
Inspired by Iron Mitten's 'It's Snowing' picture, I remembered I had intended to post some pictures of my old Deadloque collection on the blog come winter so here are a couple of pictures of the Elves, some of my favourite Flintloque miniatures, full of character and wrapped up to survive the bitter cold of the Witch-Lands. 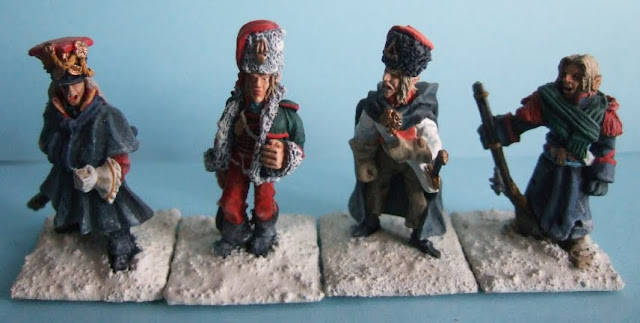 The picture above is of the command figures including Etienne Gerard reborn from Sir Arthur Conan Doyle's stories into a legendary Elven commander for the game, below are some of the excellent rank and file (it would be great if the Perry's did a Retreat From Moscow line wouldn't it?). 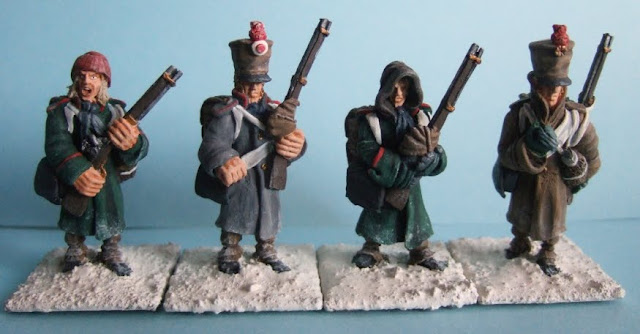 Hopefully I'll get a chance to post some pictures of the undead tomorrow...
Posted by Steve at 14:56:00 2 comments:

Whilst the workbench has a pile of unfinished projects on it I haven't managed to finish anything over the last few weeks, indeed a bit of an apathetic malaise has set in... :-(
To 'inspire' myself to get on with the 1/144th WWI aeroplanes I watched The Red Baron on yesterday evening. This German produced film has now been released dubbed (very well) into English and is pretty good. The CGI dogfights as good as, if not better than, Flyboys (which I actually like). Have a look at this trailer...
There are a couple of irritating moments (as with most war films) and I was really disappointed with the lack of the 'final dogfight' with Brown which would have rounded the film off perfectly but overall it is well worth picking up if you are interested in WWI dogfights and certainly will inspire you to get a few 1/144th models and push they around the table...
Posted by Steve at 23:47:00 2 comments: