Best Month Ever - Thank You!

I've just looked at the Blogger Stats for Bleaseworld* and it appears that February 2012 has the highest number of page views in one month (9,405) beating previous best June 2011 (8,890). Thanks to everyone who has visited, commented and follows the blog, it is much appreciated.

I started the blog back in February 2009 as a way of encouraging me to paint more than I was doing (the logic being I needed to paint stuff for blog posts!), which seems to have worked though many projects are still unfinished!

* incidentally the blog name isn't some ego thing (heaven forbid!), in fact I didn't come up with the name. Anyone know where it comes from?
Posted by Steve at 23:27:00 4 comments:

The final models for the Imperial Army unit (for a while) is a small Platoon Command squad with an original Commissar, co-opted Chainsaw Warrior and an officer (who should be with the Rapier Laser Destroyer which will get painted soon). 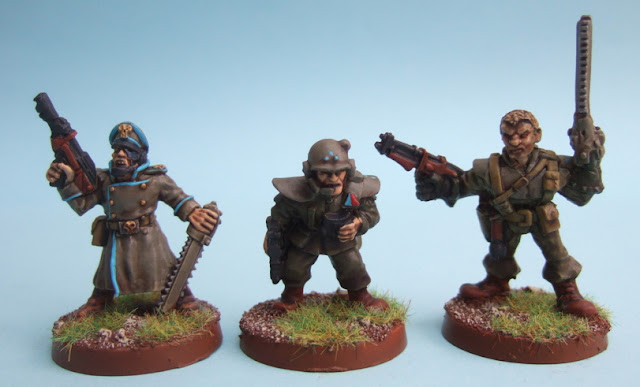 And to round off, a shot of the whole platoon with support sections...

Along with Imperial Army troops I also found half a dozen Ratling (or Halfling to you and me) snipers from 1987. At the time I did think these miniatures stupidly silly and whilst I still think they are rather silly they do have a certain appeal so painted them up at the same time.

Following on from the infantry platoon I also painted up a Heavy Weapons Support Section using the same dip painting method. Whilst no fan of the GW's 'Super Sized Weapon Syndrome' I do actually quite like these with the troopers having some kind of lifting mechanism to support the weapons. The figures are great as well, I love the one checking his watch... 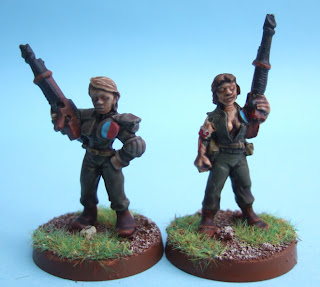 Painting in Bleaseworld has been quite productive of late with inroads made into Lead Mountain including a platoon of 1987 era Imperial Guard and support (bases drying), a unit of Harlequin Great Orcs half way through painting, which look really nice, and some jungle terrain...

Whilst sand and metallic paints were drying respectively I finished off three vehicles I picked up from Tesco's in one of their emergency vehicle packs (three vehicles for a fiver) which will find use against zombies, socialists and any other games that need 28mm modern British Police.

The cars are "as is" with some detail painting and weathering, the police van is actually a repainted ambulance with new decals I picked up from ASB Models.
Posted by Steve at 22:17:00 4 comments: 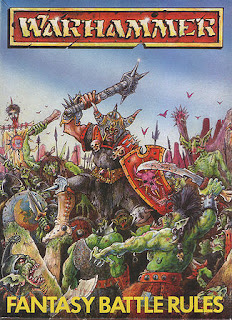 It's funny how your mind wanders as you get older! With all this Warhammer 40,000 25th Anniversary stuff I decided to paint up a platoon of Imperial Army (as they were called in the G.O.D) most of which had been sat unpainted from 1987. Of course this lead me to think about battles long past and when I was in sixth form and Maggie was in power, the many games of Warhammer Fanatasy Battle I played and, most importantly, what fun was had (see mind wanders from 40k to fantasy...).

A beer or two later and I was considering why Warhammer II seemed to provide a level of enjoyment that I've not really experienced since with the game. I'm not saying that I have not had some fun with Warhammer VII and it might be rose-tinted glasses but it didn't have the fun and flexibility of the second edition. 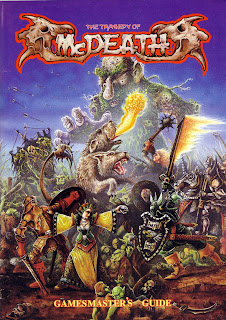 I'm not sure why this is, possibly because the game needed to be tightened up for tournament players and beardy win at all costs types but I think the newer editions have lost the heart that the first two or three editions had. Second edition was the time of scenario packs like Bloodbath at Orcs Drift and The Tragedy of McDeath not the countless rehashed army books we get these days. It also had a pretty good magic system.

So is there any point to this reminiscing of the G.O.D.? Well yes I think so. I'm going to start working on and off to rebuild my Goblinoid army, repainting some of it to a C21st standard with a view to introducing Saul to the joys of Olde Skool Warhammer during the weeks between the end of his GCSE's and we find out whether he is going to Sixth Form or applying to McDonald's. Hopefully he'll find it as much fun as I did at his age... 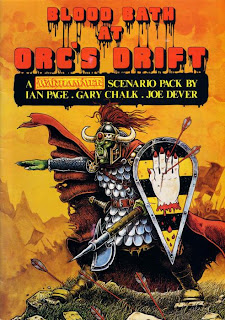 I have dug out my old Warhammer II box and it all seems to be there (including some house rules combining the hit and wound rolls) and a quick surf of the internet has provided downloads of PDFs to upload in the iPad which has saved me scanning it for ease of reference and cunning plotting whilst SWMBO watches Downton Abbey or CSI: Whatever in the evenings. I'm not sure where Orc's Drift or McDeath have been stored but I'm sure they are somewhere along with the Ravening Hordes army book (yes, in the G.O.D. we had one army book covering all the armies - and ones you don't get these days!)

Should be fun bringing Gorbage the Goblin and his army out of retirement and showing these modern day plastic stunties a thing or two, in fact he and his chariot probably deserves a fresh lick of paint...

Update: whilst I'll post photos of repainted units here I'll detail most of the progress and any other ramblings not befitting this page on my shiny new Ye Olde Skool Warhammer blog...
Posted by Steve at 18:34:00 15 comments:

Saul recorded a piece of music last year including a sample from the Orson Welles War of the Worlds broadcast. I've now run it through iMovie with some photos from the era (including a number of the US Military Louisiana Manoeuvres) and WOTW pictures and film photos for a bit of fun...

To help beef up the zombie hordes in Apocalypse-Z they allow for the inclusion of brutes, zombies who have grown larger than the normal run of the mill walkers. To represent a couple of these I used a couple of the Horrorclix Freakshow line namely Hungry Bertha and Herculon who I converted with a bit of Green Stuff to fit with the horde. Painting is just quick and easy block painting and dip but it seems to work well on zombies... 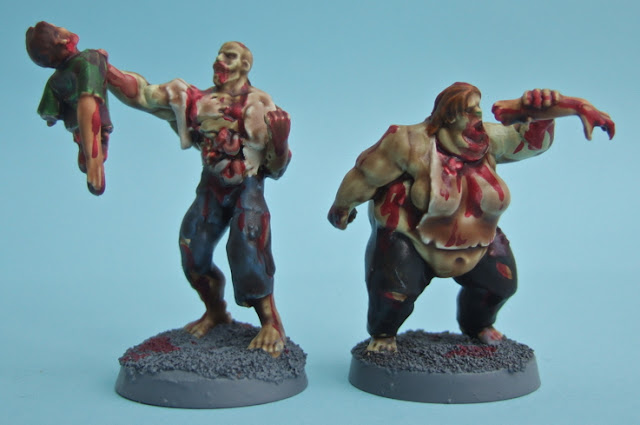 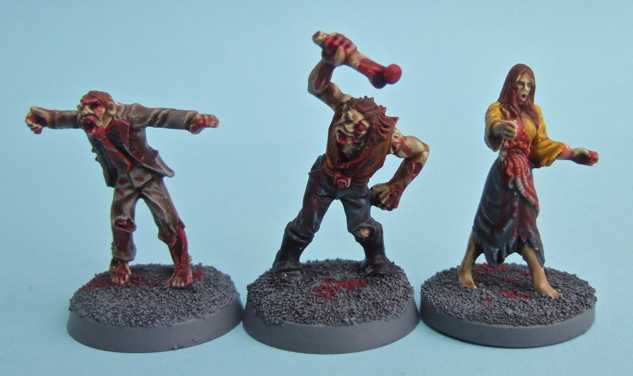 I am now working on converting a toy ambulance into a police van to go with a couple of police cars I picked up from Tesco's and must finish off the Dwarf King's Hold figures which were coming along quite nicely before I got the zombie bug (not literally!)
Posted by Steve at 17:46:00 1 comment:

Along with the flash cars, I also picked up some cheap (three for a fiver) commercial vehicles from Tesco and gave the four yellow ones a heavy weathering as if they had been on a rather muddy construction site. 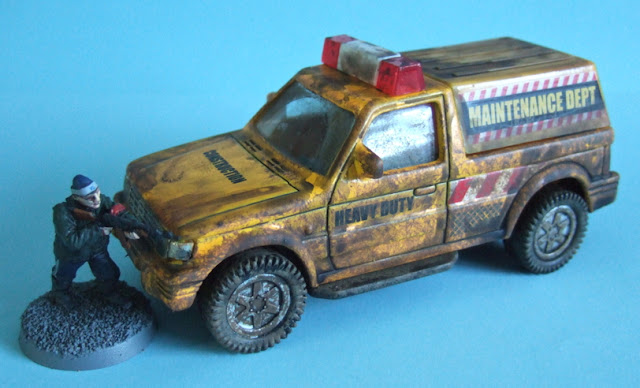 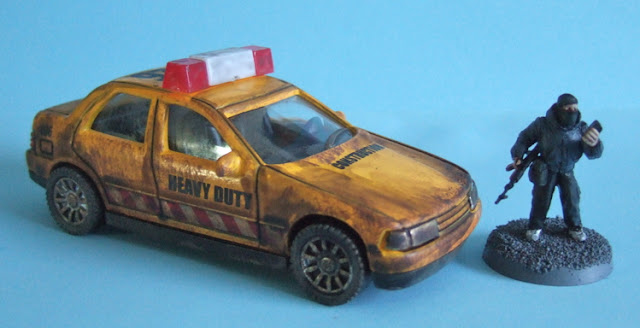 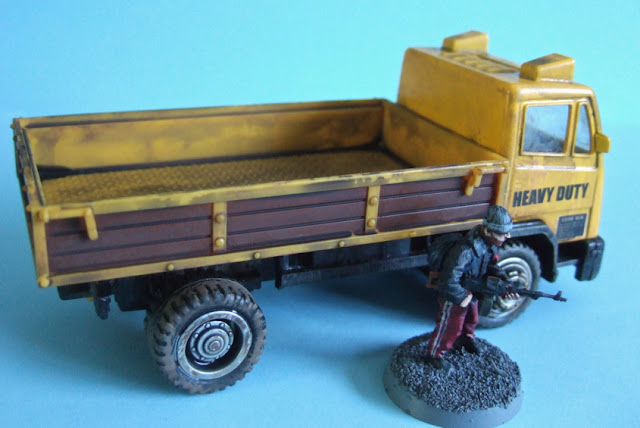 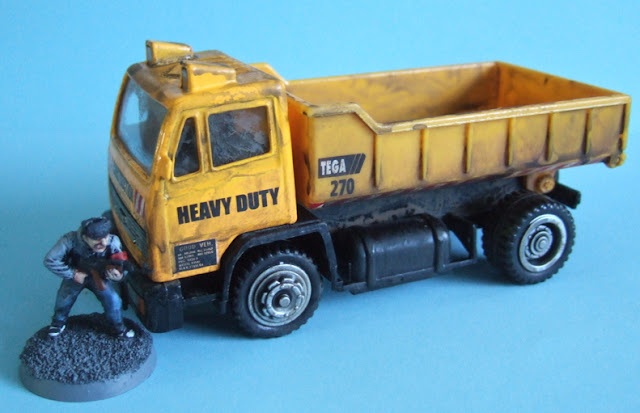 One of the lorrys came with these useful recycling bins which make great scenic items after a bit of weathering as well... 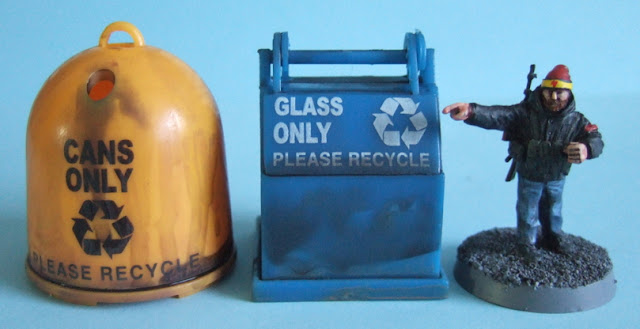 You may recall I have been working (on and off) on a contemporary English Civil War project, England Prevails. For this I have now completed my first Trade Union Militia unit from the TGWU Liverpool Dockers Chapter.

The figures are from Red Star Miniatures excellent Chechen fighters line and painted up easily enough in a mix of civilian clothing styles. I did replace the Soviet weapons on two, replacing them with SA80's to tie in with the background.

Not sure what I'll paint next, either the Dwarf King's Hold skeletons or some more zombies...
Posted by Steve at 10:38:00 10 comments:

I picked up some modern cars from Tesco's for 28mm modern and zombie games. I toned them down with a covering of satin varnish then a bit of a weathering using GW washes. Looking out the window, them seem as dirty as my neighbours...

Moving on a couple of years to the time when GW jumped the 40k shark (well at least for me), the phase of metal models and plastic arms which was a complete PITA (given I used Araldite rather than the dodgy Super Glue of the period).

These IG are a mix of the first plastic box set and some of the metal/plastic arm hybrids. I had it in my head that this lot would be some kind of elite para-military force which is why the sport bolters rather than las-rifles. One of the chainsaw sergeants was given a clear plastic riot shield to this end.

Somewhere there are some Rough Rider cavalry from the same release and Penal Troop suicide bombers but I can't seem to find them. Size wise they seem to still fit in so I'm considering giving them a repaint if I can find the other miniatures (along with a small collection of AWOL Squats one, IIRC, who was mounted on a Judge Dredd hoverboard and looked super-cool!)
Posted by Steve at 09:23:00 2 comments: