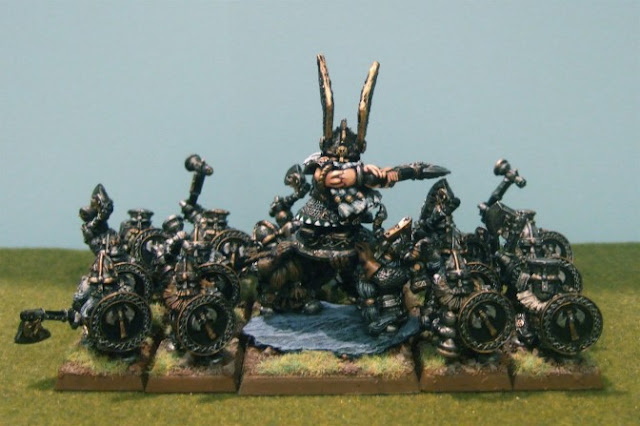 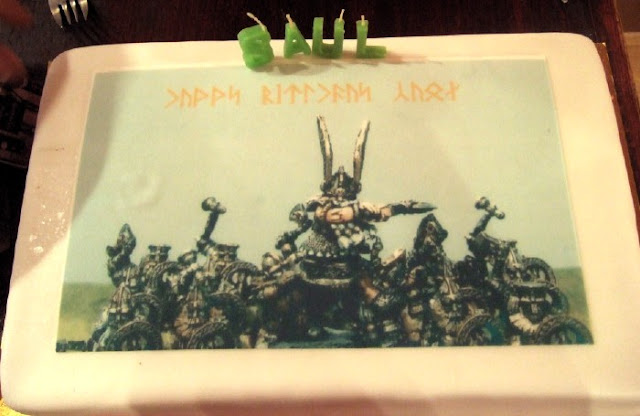 SWMBO had a photo of them put on his birthday cake which was cool - the dwarf runes  say 'Happy Birthday Saul'  - I don't know if anyone realised but Saul did and that was all that mattered...
Posted by Steve at 17:34:00 No comments:

A while back Konami did a range of Aliens models including one of the USS Sulaco the USCM spaceship that takes the unfortunate Colonial Marines to LV-426. Whilst it does not feature extensively in the film it is an appealing, somewhat iconic, spaceship design. I picked up a Sulaco off eBay a while back and whilst nice in its pre-coloured blue-grey plastic I have always intended to give it a repaint. 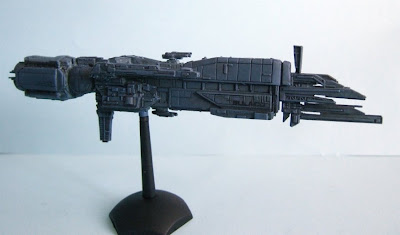 In the end I decided to go part way by applying a black wash over the model to bring out the detail and then apply a GW Shadow Grey drybrush. Whilst I am fairly happy with the result I may do a bit of detailing work later as the model has some nice fine details that would reward a more patient approach.
According to the Aliens Colonial Technical Manual the Sulaco is a Conestoga class starship and the thirteenth of thirty-six vessels in the class. It is a shame that the Konami models are so damned expensive on eBay these days as I wouldn't have minded getting another couple for some games of Full Thrust.
Posted by Steve at 09:54:00 2 comments:

Despite the finger I managed to finish a good part of the CDSU Guards Armoured Regiment with only the tank squadron left to do (ok, some models need decals but I am still not trusted with scissors!)

For the most part the unit comprises of Brigade miniatures. The mechanised infantry platoon has eight Xie Fang APC's with one command and eight sections of infantry. The Xie Fang is a nice model, but I am not sure that the exit method for the infantry is very sensible! (out the top). Nice model though. 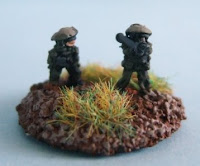 The infantry are GZG Islamic Federation infantry. Whilst half the platoon pack has troops in kefiahs (and will be used for Islamic troops in Iron Cow), the others have a very flat helmet which for some reason put me in mind of the coolie rice hats, hence their use as CDSU mechanised infantry... 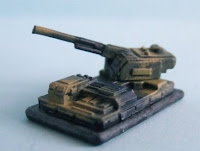 The artillery battery comprises of four Mao Zehdong SPG's, really nice models on a flat GEV bed. In retrospect I perhaps should have gone for the heavy rocket launcher variant for a more Soviet feel, but the SPG is a good looking model so I'm not sure. 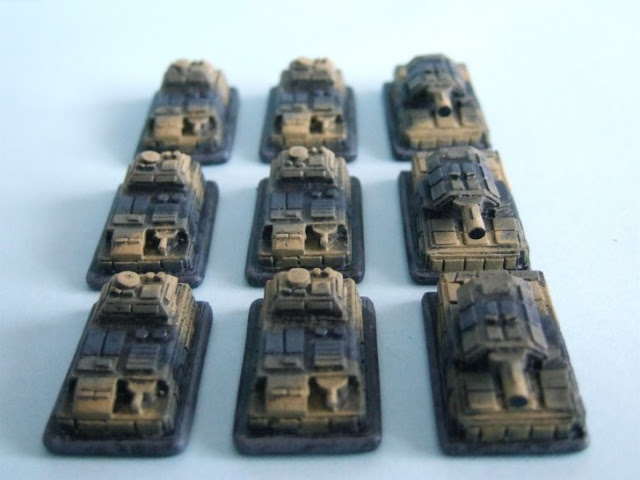 The HQ unit comprises of six Xie Fang Command APC's and three Zhu De support tanks. The Zhu De's are very rectangular in look, but again are very nice models (I really like the basic MBT).  I might get some AA variants to provide some vital air defence ability as you don't want to lose your HQ unit to a well executed enemy aerospace strike!
Finally I painted up a Kim Chaek VTOL flight. As previously mentioned Brigade are so somewhat light on the VTOL front and these are GZG AV-6 troop transports. The rectangular look fits in nicely with the Brigade CDSU models. I need to put the decals on the hull sides when I get five minutes and the use of ten fingers back. Looking at the GZG listings there are some nice generic trucks that might be useful in a CDSU army so I might see how the finances are after pay day and avail myself of some.

Jobs Too Dangerous For Men: Washing Up

A little while back the Discovery Channel ran a series called 'World's Toughest Jobs' or something like that. Well after last night I have concluded there are just some jobs too dangerous for men to do, first and foremost being washing the dishes!
Coming to the end of my stint a glass tumbler managed to fracture as I was cleaning it, cutting my right ring finger open and resulting in a fun evening at A&E in Bristol whilst they x-rayed the finger, pulled the glass shards out (ow!) and then stitched me up (the fact that it was a washing up sustained injury got brownie points with the nurses, but I'm not sure whether to tell my work colleagues it was a DIY accident - sounds more manly!). The only good news is that I can still paint although the bandage is a bit cumbersome...
There was not a lot of sympathy from SWMBO (despite the fact I cleaned the blood up off the kitchen floor first and put a casserole dish into soak before seeking her help!) who said that it was obviously caused by lack of practice and did I really need to have wrapped the bleeding wound in a brand new tea towel!
Posted by Steve at 11:01:00 5 comments:

"I did two things on my seventy-fifth birthday. I visited my wife's grave. Then I joined the army."
As opening lines to books go I must say that John Scalzi's Old Man's War takes some beating and the book itself is one of the best military SF stories I have read for many a year.
The basic premise is that Earth is a backwater and humanity's colonisation of the stars is undertaken by the Colonial Defense Forces, unfortunately the universe is a very hostile place and the CDF needs a large army. Interestingly the CDF don't want young people, but those who have retired with the knowledge and skills amassed through decades of living. Obviously their OAP's bodies are not up to the task, but the CDF has an answer for that...
I must say Old Man's War is a highly enjoyable book (in fact SWMBO pinched it off me to read before I got round to it having herself read the opening line!) and contains lots of really cool ideas for the SF wargamer (I especially liked the nano-bot ammunition block that creates whatever particular round for your rifle you need, whenever you need it) and as such if you haven't read it, check it out asap!
Unfortunately on the painting side I've got absolutely nothing done over the last week as life has got in the way (aka being Saul's taxi...). Hopefully I can grab a few hours to finish off the CDSU and maybe slap some paint on my (based and primed) 6mm English Republic Gen:I troops now that Old Man's War has given me some better ideas than just painting them blue!
Posted by Steve at 18:26:00 1 comment:

Well the CDSU armour is now 2/3 done but starting to suffer from micro-fatigue I cast an eye around for something different to break the monotony of 1/300th camo schemes. Like many (I suspect) I have been intrigued by the rise in popularity of dipping using the Army Painter shades and at Crusade earlier in the year bought a tin of Dark Shade but hadn't got around to trying it (a bit of cowardice I would suspect about the idea of slopping brown stain over painted miniatures!).
With an eye to future projects and the fact that in Year 10 History, one of Saul's projects should be to build a model of a trench system (and bearing in mind we got slightly carried away with our 10mm Norman castle in Year 8....), I have been acquiring odd boxes of 20mm WWI infantry and tanks with a view to spending some weeks in the summer painting them up. Having a box of HaT Canadian Infantry (which are perfectly useable as British) I decided to experiment with the dip to see how this would speed up the project when I got around to it.

I'm not quite sure of the photos do the figures justice and bearing in mind the detail on the models faces is somewhat smooth (see the PSR review for a more detailed "critique") but the experiment worked really very well and I am really pleased with the end result. The figures were base coated in Tamiya Khaki with webbing in GW Kommando Khaki and puttees in Graveyard Earth before painting on the dip (as these are 20mm I didn't think the literal dip method was a good idea).

All in all (excluding drying) the painting of these 10 figures took about 15 to 20 minutes all told. Whilst I'm not sure dipping is appropriate for all my outstanding paint jobs, it certainly will be useful for a number (now where did I put that unpainted Tomb Kings army?)
Posted by Steve at 12:02:00 1 comment: