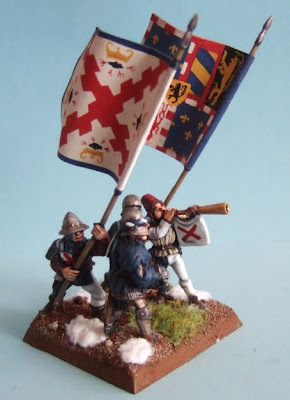 In between other things I've been slowly working on my Burgundians to add to the pikemen (here) I finished late last year (after twenty-five years!). These haven't taken quite as long, but many of the figures have changed manufacturer since I bought them! :-)
First off is the pike block command unit, three Citadel (now Foundry) figures and a Grenadier (now Mirliton) musician. The standard bearers where initially painted many moons ago (see here) and whilst I repainted the standard bearers I left the hand-painted flags untouched. I did umm and ahh about this as there is a school boy error (which I was) on the rear flag as I didn't mirror image the (unseen) reverse. I did consider replacing the flags with some I bought at Warfare but in a fit of nostalgia left them as painted a quarter of a century ago. 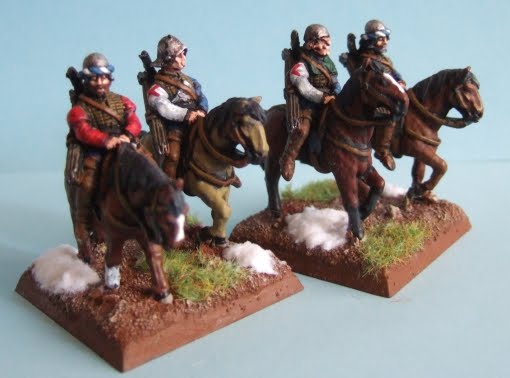 The mounted archers were also Citadel, now Foundry, part of the old Wars of the Roses range. I replaced the horses with one from the Wars of Religion range and the others from some Normans as the ones that came with the figures were more like unbarded war horses, rather than flea-bitten nags to get the archers into combat. 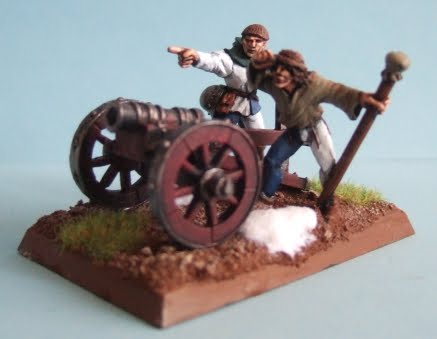 The cannon is a particular favourite of mine, sculpted by Mark Copplestone for the old Grenadier UK Fantasy Warriors range. The good news is the model is still available (along with a load of other useful late medieval miniatures like the hangunners below) from Mirliton in Italy. Whilst these are marketed as fantasy they are pseudo-historical late C15th types and will work well for Continental and Wars of the Roses armies. 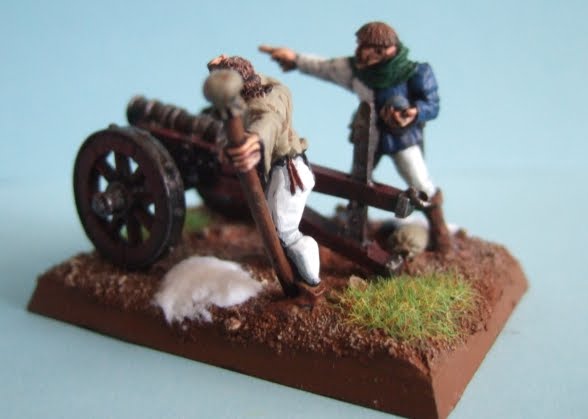 Rumaging through my Wars of the Roses box I do seem to have amassed quite an arsenal of artillery from various manufacturers so expect some more being added to Charles the Bold's artillery train. 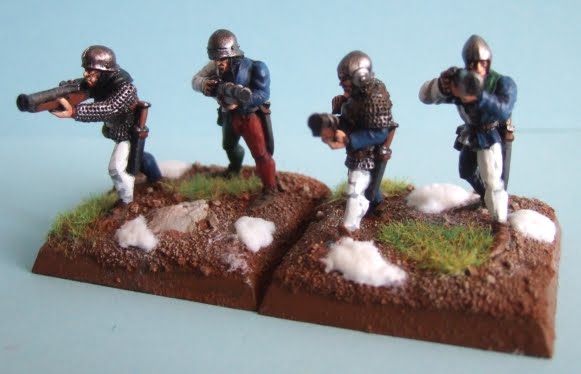 Lastly the handgunners, mounted up two to a 40mm square base for Foundry's Medieval Warfare. As stated these are ex-Grenadier, now Mirliton and because they are slightly larger than most of the old Citadel Wars of the Roses range I've found they fit nicely with the new Perry Wars of the Roses plastics (some of which I've acquired for a future Tewkesbury inspired project). 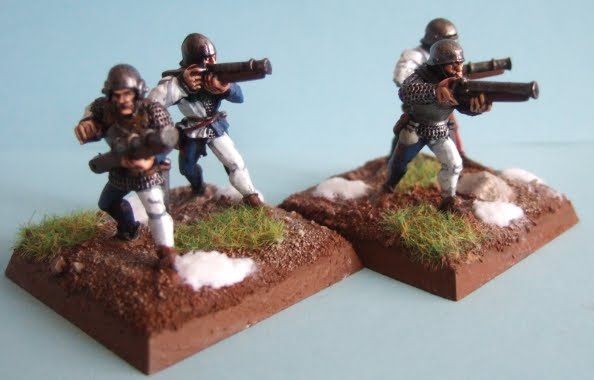 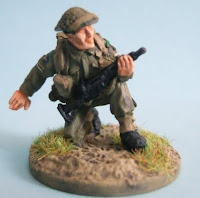 I am beginning to think my 20mm WWI Germans are cursed, after dropping one into the tin of dip, the matt varnish spray went terribly wrong and ended up with 30 odd figures being covered in a layer of foggy varnish. Fortunately I recalled they might be able to be rescued by applying gloss varnish straight away and that seems to have saved them (though now they are back being as glossy as when they were dipped). I hope to get a new tin of varnish and might wait for a slightly warmer day to spray them again.

So, as there are no new figures to show off (Burgundians 95% finished, just the snow to add), I've dug out some samples of my 36mm (1/48th) North Star WW2 British, painted up as 43rd Wessex Division for a Normandy based Project X Weird War 2 game back in 2004.

This is a bit 'olde worlde' painting style from me, being enamels over a white undercoat, but I still like them. The figures were sculpted by Richard Ansell and are really nice models and a joy to paint. Also despite being appreciably higher than 28mm, they took up no more space (mounted on the same 2p coins I used to use for 28mm) and are more anatomically correct.

The range no longer seems to be available which is a helluva shame as the scale has a lot going for it, most notably the wide range of 1/48th scale models from the likes of Tamiya.

I painted up a platoon of Tommies for the game but for some reason ended up short one no.2 for a Bren gun. Normally I wouldn't worry too much and just draft in some odd soldier, but Richard had raised the bar by having the no.2's carry a wonder spare barrel bag, so I forced myself to dig out the Green Stuff and have a crack at sculpting one on one of the riflemen - can you tell which one is the cast model and which one the converted? :-) 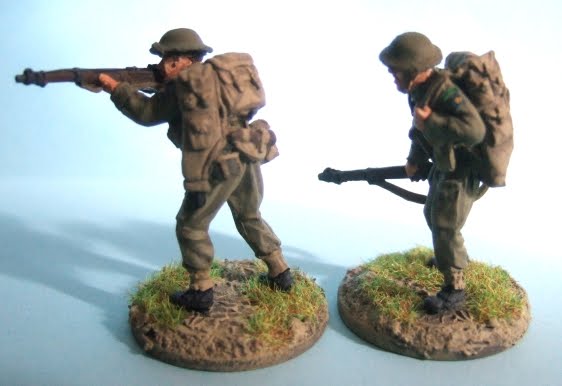 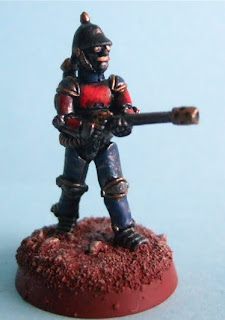 In between dropping WWI German Stormtroopers into the dip can (!) last night, I managed to finish the four Ironclad Miniatures VSF automatons I picked up a little while back. Nice models they are the same height as Empress Miniatures Zulu War Brits who will form the core of my 28mm expedition to Mars.
Initially I had intended to go with just a basic metal look with bronze to highlight some detail, but decided that to make them less intimidating to Tommy, 'The Powers That Be' decided to paint them in a facsimile of the British infantry uniform. Campaigning on Mars has been tough however and the paint is starting to be be weathered away on these four stout machines of the Royal Engineers Mechanised Corps.

Rules wise I haven't made any great decisions yet but might go with The Great War as a basis, maybe with some of the WH40k VSF amendments floating around the web...
Posted by Steve at 10:19:00 3 comments:

Legion of the Damned 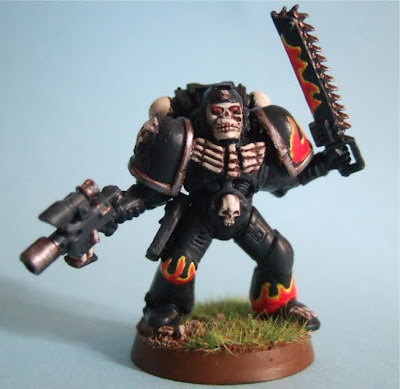 Although I am part way through a 20mm WWI German Assault Company for The Great War and just have the bases to do on some Burgundian artillery, handgunners and mounted archers for Medieval Warfare, I got sidetracked with a 'Eurkea!' moment on Friday night and just had to 'scratch that itch'...
Saul has been unsubtly hinting that a squad of GW's new Legion of the Damned would go nicely with his Screaming Eagles Space Marine army. However, they cost £5 for each legionnaire and £8 for the sergeant and support weapon legionnaire which is a bit rich for my taste so my 'Eureka!' moment was to have a crack at making a test piece out of any bits I could cobble together and a bit of Green Stuff.
This Damned Sergeant is the end result. I carved away the bottom of the Marines helmet and fitted in a plastic skull from an old Tomb Kings spearman, Green Stuffed some ribs and a skull motif on the shoulder pad. I did make a big error in fitting Marine Scout arms so had to Green Stuff some elbow pads. 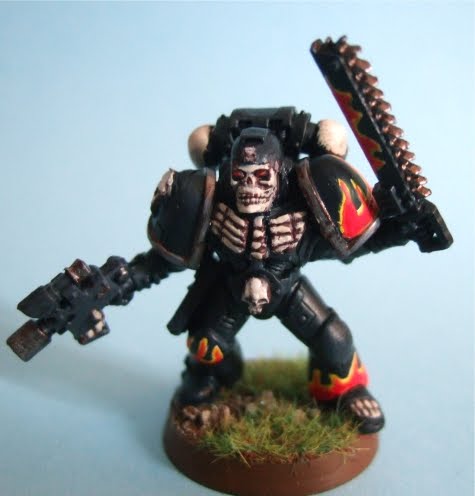 Overall, for a test piece, I'm quite pleased with him and Saul likes it (and it didn't cost £8!). I won't repeat the skull faceplate look for any other Legionnaires as I'm not 100% keen on it, but it looks fine for the sergeant.
Now back to the Germans...
Posted by Steve at 11:55:00 1 comment: 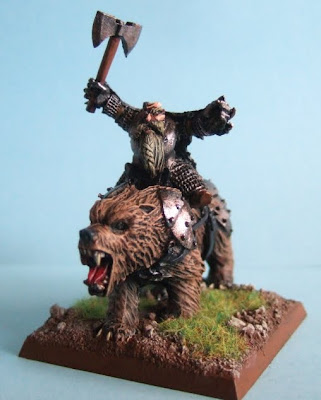 Well today is Bleaseworld's 1st birthday. 40 followers, 120 posts and 21,763 visitors (since 29th March) certainly gives me a warm, glowy feeling. Thanks to everyone who visits, follows and says nice things, it's much appreciated and the raison 'd'etre for the blog (to encourage me to paint more) appears to have been quite success, though perhaps I need to focus on getting specific projects completed...
Today's 'bear'thday post (sorry, couldn't resist...) is this lovely West Wind dwarf hero on grizzly bear (Varan the Bear). This is a really nice, impressive model (the base is 50mm by 50mm) that didn't take that long to paint, especially given it has been staring at me in its black undercoat glory for the last six months or so. I'm sure it will look good as part of Saul's dwarf army, he was suitably impressed with it when he saw it completed last night. 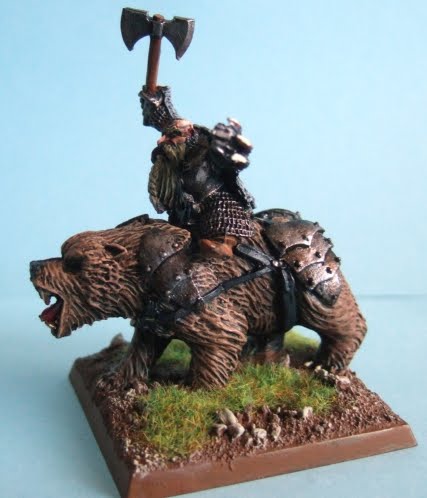 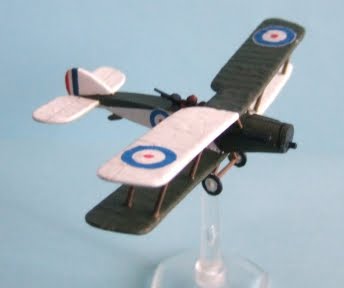 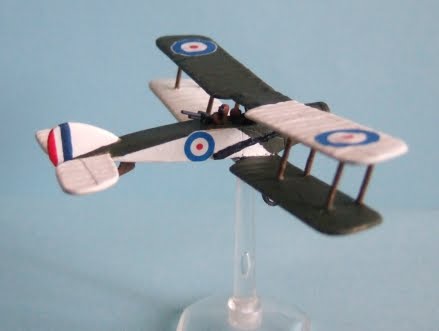 Ikea has ridden to the rescue and helped me get my painting mojo back! I've doubled my display cabinet space with the purchase and fitting of three more of their Bertby display cabinets which now cover the backwall of the games room (see below). The additional space allowed me to clear the work area and WIP shelves of finished models and since then I've been bent over the painting work top beavering away... 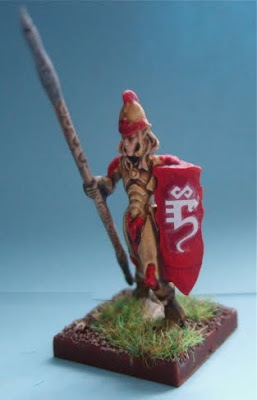 First to benefit from the renewed enthusiasm was these Mantic Elven Spearmen. Whilst I've still got the front command rank to finish I thought you might like to see these given my fun painting them gold at the beginning of the year.
I must confess I was becoming really dispirited with these as they did not "look right" at any stage until right at the death when I put the flock on and they suddenly looked okay. The shield decals attempted to thwart me by going foggy despite using decal fix (bloody GW Eldar decals) but I've disguised this with a bit of paint on the worst parts.
Overall I'm quite pleased with them as my first dipped 28mm figures and now feel it's worth cracking on to finish off the small army I bought a while back (though I might try a different approach to base coating instead of using gold).
Next the Bristol Fighters which are nearly done... 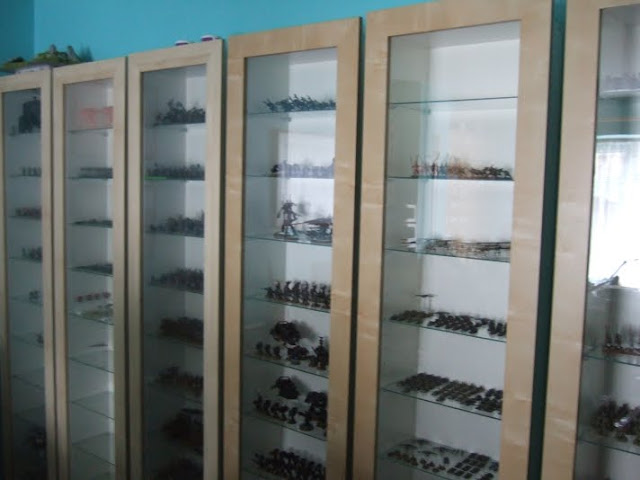