I have for a little while now become increasing fascinated by the Ambela Campaign on the North-West Frontier in 1863. In October a British expedition of 6,000 troops was sent to destroy Malka, the base of the hostile Yusufzai Pathans, their route going through the Ambela Pass, the territory of the Bunerwal Pathans who were believed to be friendly. Unfortunately the Bunerwal believed the British intended to annex their land and fiercely resisted the expedition with 15,000 men and it took the British almost two months of hard fighting that ebbed and flowed to force the pass, see the Bunerwal surrender and eventually destroy Malka.

Not your typical North West Frontier action being two decades odd before the more popular 1880's period, I thought it would make for a decent Rebels and Patriots project with a colourful British force of British line, Highlander Light Infantry, Gurkhas and Sikhs to pit against George's Afghans when we get back to gaming. 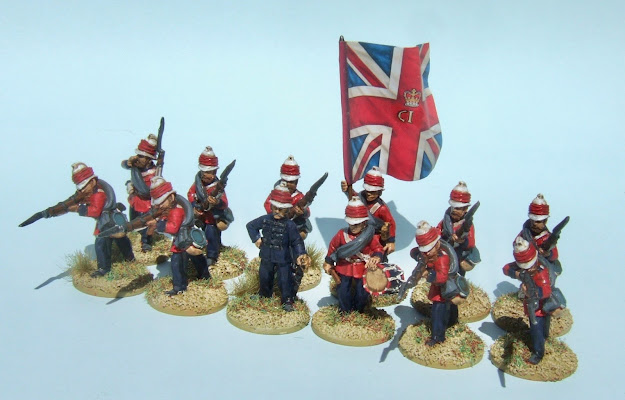 The first unit I painted are the 101st Royal Bengal Fusiliers, an ex-East Indian Company regiment which was transferred into the British Army following the Mutiny.

The figures I used were packs BRV301 and 303 from the Wargames Foundry 2nd China War range as the uniforms are the same with the 101st wearing the 1864 wicker air-pipe helmets at this time. 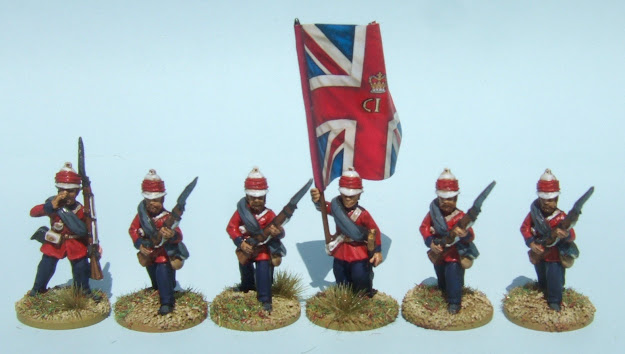 As an experiment I undercoated the figures with a Red spray this time (with half an eye on future projects), block painted the trousers, helmets etc, then used Soft Tone dip on the top half of the figures and a black wash on the trousers. I then added some highlights before varnishing.

The flag is from GMB Designs, one of the Crimean range. They don't do a specific flag for the 101st so I picked the 13th Somersetshire (as they also had blue facings) and then painted over the XIII numerals and replaced them with CI for the 101st. Unfortunately the Foundry command pack only has one standard bearer so I went with the Queen's standard for the unit. 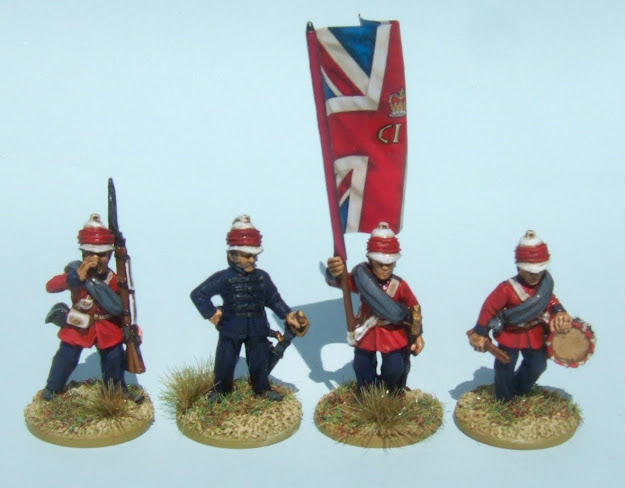 I must say the figures were a joy to paint, I'd forgotten how nice Foundry figures were to slap some paint on. Next up the 71st Highland Light Infantry when my order arrived from Perry Miniatures!
Posted by Steve at 10:32:00 6 comments:

With this September being the 2,500th anniversary of the Battle of Salamis, George and Steve have had the great idea of refighting the battle down BIG, assuming it has re-opened, using Osprey's Poseidon's Warriors (with a few other sets waiting in the wings in case we don't like it). Both Steve and George have a number of Xyston Miniatures 1/600th galleys so that dictated the scale, but at £7 a ship, I didn't fancy spending around £200 to raise a fleet (nice though the miniatures are). A bit of research led to the discovery of Voxelhouse's 3D Ancient Navy on Wargame Vault for under a fiver and Matt kindly printed me off 20 plus ships for about 80p a ship.

In the game galleys operate in squadrons of five ships, so I've painted up 15 triremes with one archer tower and 5 with two towers (I will confess my nautical knowledge does not stretch to specifically naming what specific types of trireme these are).

Given the amount of ships that will be on the table I have painted the squadrons in different colours, but with some individual embellishments to break up the uniformity.

I went for quite bright colours then painted Soft Tone dip over to provide a slightly grubby, weathered look which I think has worked ok.

A few of the triremes were damaged and missing their sternposts (this might have been a printing issue we didn't spot), I did try adding some using jewellery makers wire courtesy of SWMBO but it just didn't look right so I dispensed with them.

All in all I'm quite happy with them, I could have spent more time on them but I don't think it would have made them look much better and en masse they look quite cool...
Posted by Steve at 16:52:00 3 comments:

Completing my Mortal Gods Themysciran Amazon Lochagos are the Lochos and her two companions. The models are from Bronze Age Miniatures Amazon range with the wire spears replaced with Victrix plastic ones and spare shields from the old Wargames Factory Amazons. 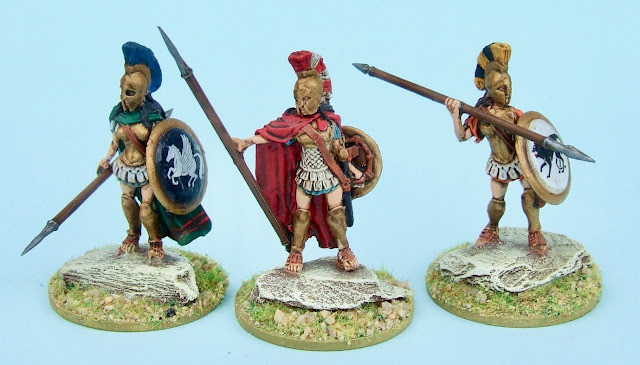 And here is the pride of Themyscira all together, ready to battle Athens, Sparta and the even maybe the Gods... 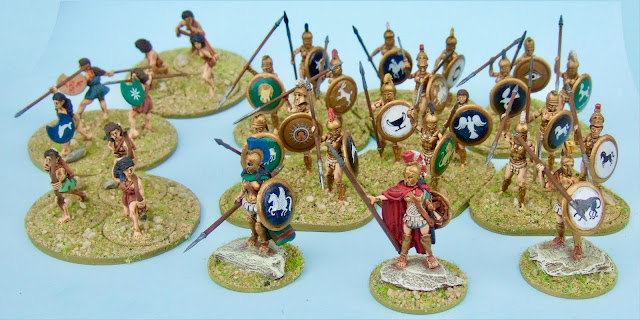 Continuing to paint up my Mortal Gods Themysciran lochagos I have now completed the backbone of the army, two phalanxes of Amazonian Hoplites.

The models are the old Wargames Factory Amazons, not the greatest models but by no means as bad as people recall. They were block painted and then Soft Tone dipped before some highlights painted on. Shield decals are some old Immortal ones I had hanging around.

I am not very happy with the official Sarissa bases. Unlike bases from Warbases or Charlie Foxtrot the holes are not totally cut through and no matter how much sanding I've done the fit is extremely tight and I am concerned the plastic models may get damaged if I attempt to remove them as casualties so I may have to use a dice...
Posted by Steve at 15:02:00 No comments: 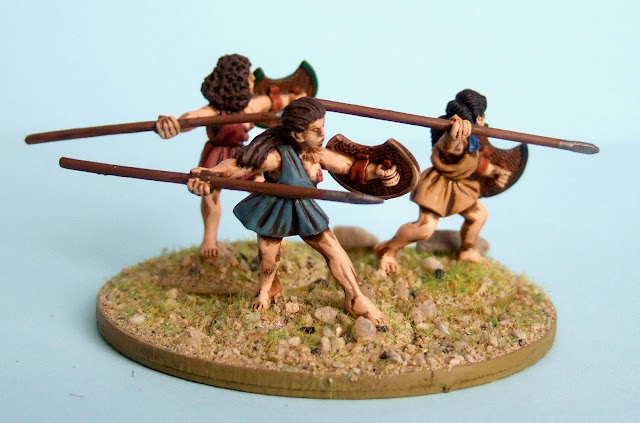 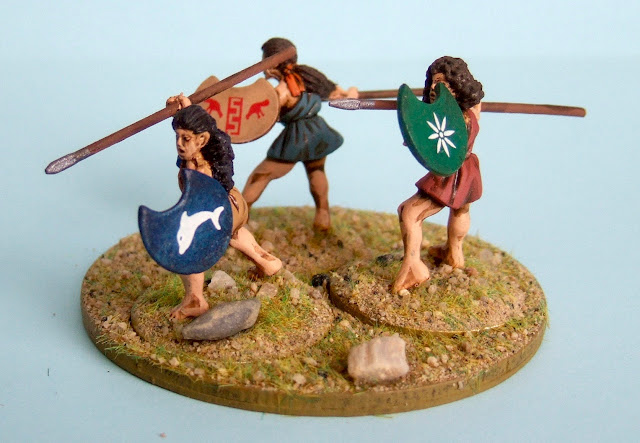 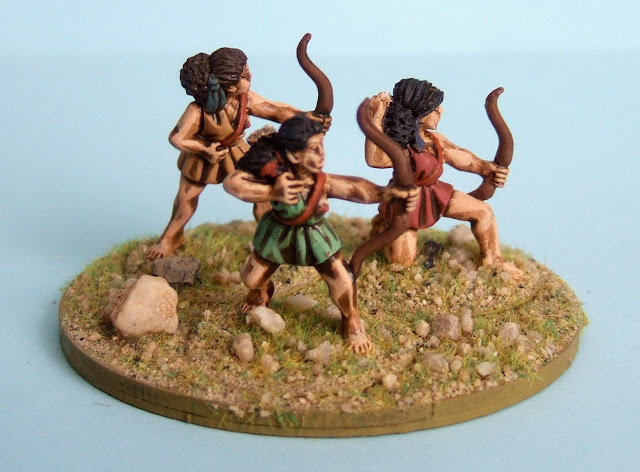 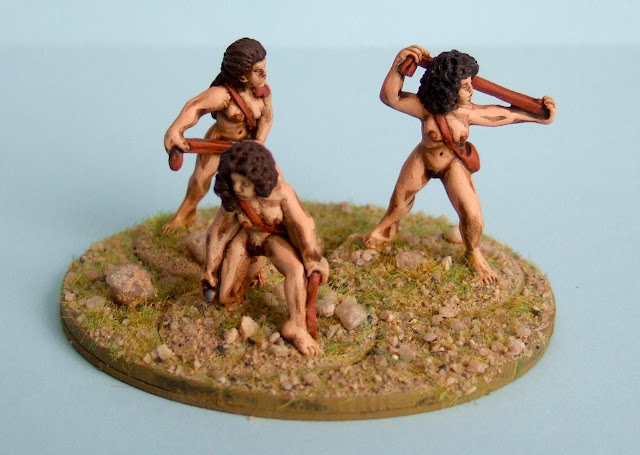