Ever since Foundry released their Ancient Greek range many years back now I have had an itch that needed scratching. No, not hoplites or the 300, but Centaurs. I'm not 100% sure why, I would guess it might originate with the Centaur model that came in the Citadel Runequest box set, whatever I have had this itch to take some hoplites and convert them into centaurs for sometime. 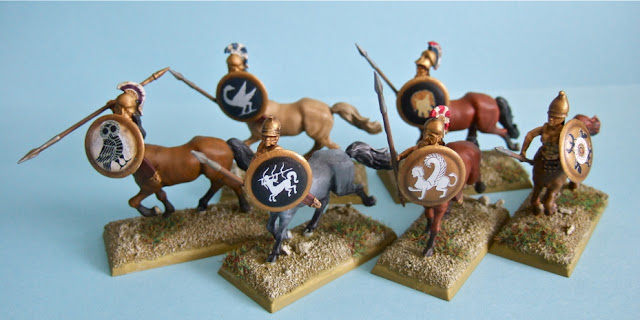 Anyhow having impulsively purchased the Wargames Factory Amazons at Salute it occurred to me being hard plastic, the upper bodies of the amazons could be used with some plastic horses to make some Centaurs (or more accurately Centaurides as they are female). 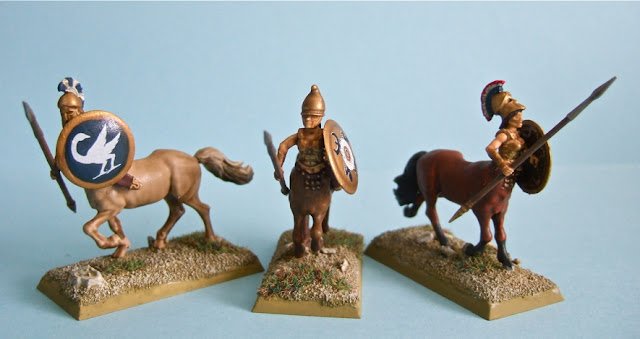 For the horses I used those from the Wargames Factory Persian Cavalry set (the horse sprues are available separately direct from the manufacturer but overseas postage scuppered the idea of buying them direct), and quite minimal filling was needed to merge the Amazon torsos with the horse bodies. The horses are four part, head, tail and two body halves so it was a simple job to make the horses sans heads and add the Amazon bodies. The Amazons are one piece bodies so the legs needed snipping off but this meant that the pelvic area could be utilised to form the connection with the horse parts.

The heads, shields and weapons all come from the Amazon box which is chock full of extras (the peltast shields have been added to some Foundry figures for a forthcoming Athenian unit), the only non Wargames Factory bits are the slotta bases and shield decals from Warlord.

Overall I am very happy with them, the only problem is that I have no real plan regarding use, though that Tribes of Legend looks interesting...
Posted by Steve at 10:23:00