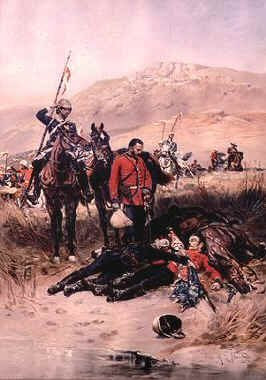 Back in 1979 I went on a scout camp to Llangynidr, the highlight being a a visit to the South Wales Borders museum on a day trip to Brecon. I can't remember a great deal about the small, musty museum but I think it had a number of Zulu shields and weapons. I did buy some photos of paintings of the Zulu War including the two De Neuville paintings of Coghill and Melvill's attempt to rescue the colours of the 24th which adorned the back of my childhood bedroom door along with a print of Fripp's Battle of Isandhlwana.

A few years later I considered wargaming the period buying a pile of 15mm Minifigs, some Hovels Kraal huts and joining the Victorian Military Society but the idea waned as no one else was interested.

Fast forward thirty odd years and with a birthday present of some cash from my Mum and Warlord hosting a 20% off boxed sets for the Jubilee I decided that I would splash out on a British and a Zulu plastic starter army. This means I am going to find it hard to argue I haven't broken my 'no new periods' rule but I am considering the redcoats doing double duty on Mars and the Zulus maybe popping over the Middle Earth as warriors from Far Harad so.... 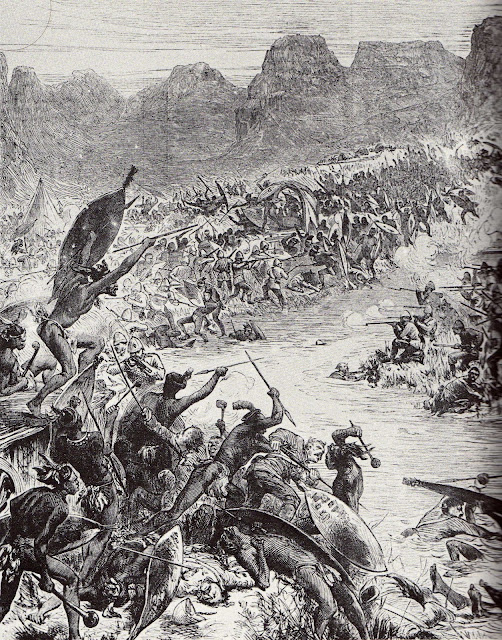 Rules wise I have not set my focus on anything. I have some ideas of what I'd like to do. I am considering sabot basing the figures so I can using them individually for skirmishes like The Sword and the Flame and element based for larger scale games.

I might have a look at what was done in Black Powder but my gut feeling is leaning me towards modifying David Manley's Don't Throw That Bloody Spear At Me Sudan rules maybe with a Pony Wars style random Zulu generator. I have David Bickley's Washing of the Spears which seem to fit the bill with a Zulu generator but does suffer from being one of the worst laid out sets of rules in recent years which makes them hard to follow (as well as having some gaps such as references to a Boer Army list that begin half way through the rules then disappear by the end). I might give them another look though as his ACW rules published by Foundry seemed fun enough in an old school way.

Whatever, there will be no rush, the snap purchase was to take advantage of the 20% off sale and I have no plans to start working on the figures before the autumn, immediate plans are to finish the Athenians, Orcs and start the Spartans over the summer (if we get one). I'll also need to watch Zulu and Zulu Dawn a few more times!