Steady In The Ranks!!!

I caught myself badly infected with "shinyitis" last night, filling my shopping basket on Amazon with lots of "must have" books on the Zulu War. I'd just finished reading Saul David's Great Battle: The Battle of Isandlwana e-Book and having spent far too long on Empress Miniatures looking at some of the Imperial volunteer and auxiliary units I felt Ian Knight's Osprey Elite British Forces in Zululand, 1879, would be a good volume to have. Ian Castle's Osprey MAA Zulu Wars: Volunteers, Irregulars and Auxiliaries also looked very useful but £50 for an OOP Osprey is too much. I then caught myself and emptied the rapidly filling shopping basket which not only was adding a hefty bill to what I plan to be a relatively small, self-contained project, but also realising I hadn't bothered to even check what books I had on the subject! 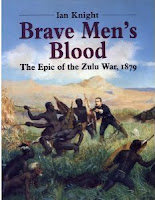 I knew I had a copy of Donald R. Morris' The Washing of the Spears and thought Ian Knight's Brave Men's Blood spotted on Amazon looked familiar (it was, I already had it) but I also discovered (or should that be re-discovered) a useful mini-collection of Anglo-Zulu War books I had collected years ago when I was first interested in subject.

So in addition to the two volumes above I also already have:

Osprey MAA57 The Zulu War by Angus McBride
The Zulu War by Michael Barthorp
The South African Campaign of 1879 by J.P.Mackinnon and S.H.Shadbolt
Captain Carey's Blunder by Donald Featherstone

As well as some generic colonial volumes including useful sections on the war:

Ok, I did go back to Amazon to pick up a second hand copy of Saul David's Zulu: The Heroism and Tragedy of the Zulu War of 1879, as it is a bit of a revisionist history, but I have decided that I really don't need to add to the library (especially when I also have a few books on the First Boer War and they'd make a useful third force who can fight both the British and the Zulus...)
Posted by Steve at 13:04:00