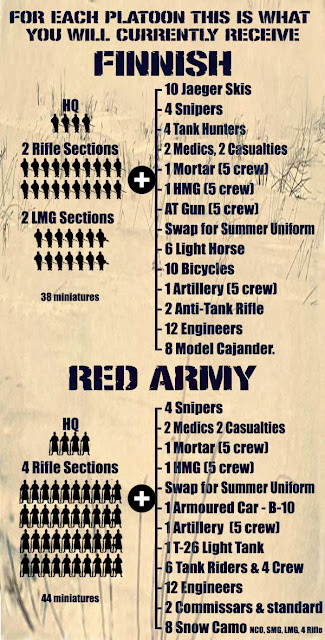 The Baker Company Kickstarter is really starting to deliver on the bargain of the century front as the Free stretch goals kick in. With sixteen days to go on the Kickstarter pledging £60 for a Finnish rifle platoon currently nets you £228 of product and putting down £60 for a Red Army rifle platoon gets you £220. With the levels falling like skittles the value for money promises to get even better.

I have decided to raise armies for both sides with a view to trying some solo wargames as well as regular ones, the challenges faced by both sides will make for interesting tactical problems.

The Baker Company Red Army sections are a little short of full strength TO&E. I was going to add a few more packs of riflemen to bring them up to strength, but adding a second platoon (with all the added extras) struck me as the most value for money way of doing this with surplus unneeded miniatures being sold via eBay.

Rules wise I think I will probably use Bolt Action. I know there is some snobbery about them with accusations of being WW2 40K being thrown about (unfairly I think) and Too Fat Lardies Chain of Command is flavour of the month with the smart kids, but I like Bolt Action. I have picked up a copy of the Soviet Army supplement for Bolt Action recently and will get the Armies of Italy and the Axis (which includes the Finns) when released (having a lot of 28mm mid to late war Russians around I have a fledgling idea to do some 28mm WW2 gaming projects with no Germans in sight!).

Terrain wise I already have plans for some generic snow terrain to use in a multitude of scales, dropping on items like buildings and trees as required. I have found a decent offer of fifty assorted Noch fir trees for £30 which seems like a plan which will cover most of what I need. I have some Hovels Eastern Front wooden buildings somewhere, which will do a job too.

On the "research" front I have a copy of a the Finnish film Talvisota (The Winter War) which I shall be sitting down to watch soon and get me in the mood...
Posted by Steve at 15:38:00