Suffering that debilitating male disease known as a runny nose (aka the sniffles) I have bravely been sat in front of the television and laptop today rather than finishing off my half painted Blackburn Kangaroo. However all is not lost as I have been investigating the possibility of undertaking a small AirWar: 1918 project - the Chaco War 1932-35. The Chaco War was the bloodiest military conflict in South America during the 20th century fought between two of South America's poorest countries Bolivia and Paraguay. The war was for control of the northern part of the Gran Chaco region (known as Chaco Boreal), which was thought to be rich in oil (which it didn't). It is also referred to as La Guerra de la Sed ("The War of the Thirst") for being fought in the semi-arid Chaco.

Whilst air combat was not as commonplace as in WWI, the Chaco War did see dogfights and there is an interesting mix of interwar designs in action. The only issue is how practical an idea is it and what models are available? I have been looking at 1/144th as my preferred scale given that is what I am using for WWI and WWII.

Breguet 19: despite 2700 of these being made during the Inter-war period, no one produces a model in 1/144th. That said it did not do a lot in the Gran Chaco War.

Curtiss Falcon: also appears to be unavailable in 1/144th, 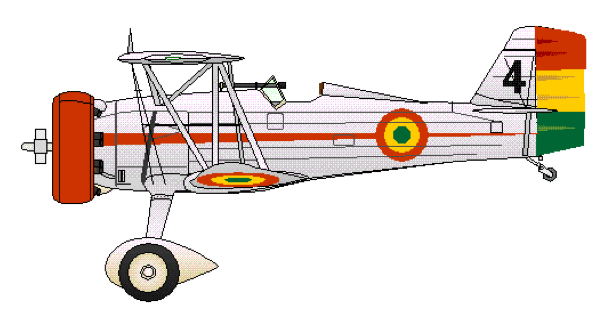 Vickers Type 143 Scout: sadly not available though I suspect there might be something out there that could be converted to act as a Scout (maybe a Bulldog?)

Initial air battles featured the Scouts, Vespas and Wilbauts before being replaced by the Curtiss models and Fiats. The Potezs' served throughout the war. There were other aircraft in both air forces but do not appear to have taken part in air operations.

Looking at the models available it would appear that the later air operations are the more gameable with two of the Curtiss and the Fiat and Potez available in miniature. However one should not give up hope given the proliferation of 3D print designers making all sorts of weird and wonderful aircraft and Gran Chaco is certainly interesting enough that hopefully one day someone will take a punt at producing the missing aircraft.
Posted by Steve at 19:12:00