Along with wargaming and military history, my other great passion is rock music whether heavy or prog (or both). Occasionally the two cross which has led to this blog entry. 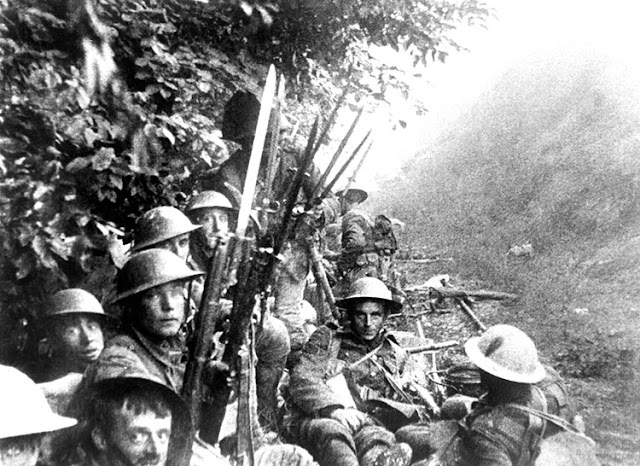 Ex-Marillion lead singer Fish is currently writing his new album and one of the songs, High Wood, is about the Battle of the Somme and the Royal Scots participation in it. Whereas most artists keep the creative process a tightly guarded secret, Fish is a great one for sharing and has been posting about the development of the song and its lyrics, as well as the background to it, on his Facebook page.

I was especially taken by yesterday's post and felt like sharing it to an audience who it likely wouldn't reach. Even if his music is not your cup of tea, hopefully his words are of interest...

“Thistle Alley” is part 4 of the “High Wood” suite, the darkest and heaviest of the sections addressing the main assaults and the deadly war of attrition that occurred there in late 1916.

My maternal grandfather, William Paterson, was serving with the 8th Battalion Royal Scots at that time and as a pre conflict miner he was with the entrenchment sections allocated to trench digging duties. My friend Simon Moston who studies WW1 and is a battlefield guide did some research and discovered that William was actually involved at High Wood and his battalion dug a serving trench that enabled troops to move closer to the enemy before the jump off to an attack. The trench he is acknowledged in regimental records as having been involved with was “Thistle Alley”.

A lot of the digging occurred under machine gun/ shellfire, gas attacks and at night and by the time they were digging these jump off trenches the battle had been underway for some months.This meant that the soldiers were digging through what was essentially a graveyard, not helped by continuing explosives exhuming and dispersing bodies. It must have been truly hellish!

A mine was dug over many weeks and detonated in the latter stages of the battle in an attempt to silence a machine gun stronghold that dominated a corner of what remained of the wood and the surrounding area.

Tanks were also used here for the first time in the war but were relatively useless in the stump filled terrain and between breakdowns and damage from shellfire contributed little.

Aircraft were starting to play a part and between observation duties and ground assault support made a mark in the proceedings.

Principal combatants were still the infantry, the boots on the ground, who took the brunt of the fight and the casualties numbering tens of thousands.

William went on to be attached to the 154th Machine Gun Corps and as such would have been involved with the main assaults. I am still looking into his history with the help of Simon and others.. He did return from France in 1919 and never spoke of what he saw.

It is estimated that the bodies of 8000 men, eviscerated by explosives, were never found and remain in the 6 acre area of the High Wood.

The wood eventually fell to the British in September 1916.

“Ghastly by day, ghostly by night. The rottenest place on the Somme.”

Rockets are flying, signal distress over no man’s land,

With hopes they are fading, splutter and die in a leaden sky,

The wounded resignation, the corpses on the wire, a frozen tableaux flickers in the light,

Motionless as spiders caught out on a killing floor, muffled picks and shovels hold their still,

A storm of fire and metal tears the wood asunder, shatters stumps of scorched and splintered trees,

Cowering in the mud within the roots, incessant thunder, tormented shredded souls are torn apart.

Deep beneath the surface the chalk yields to the chisels, bloodied fingers tear the face away,

Dragons crawl the ridges towards the spires on new horizons, ploughing through the charnel pits and gore,

The spawn of death’s invention, a victory their burden, the promise stalls and wallows in the mire,

High above the stage, a chorus of dark angels, a circus joins the theatre of war,

The props are in position, fuses primed and ready; the wires pulse the signal cue the mine exploding

The graves are opening.

The dead they are rising, fear haunted faces, gaunt and grey,

Ghosts are gathering, the Dance Macabre, the hellish fray

Heaven above Thistle Alley below

Whistles are blowing, the maxims are waiting

To carve the flesh, shatter skulls and crush the bone

The gas that whispers in the confines of the trenches

To choke the life of those who dare to hide.

Heaven above, Thistle Alley below

Motionless survivors bloody on the killing floor, praying for the darkness to return,

Praying for the darkness to return and hide the graves of the living.
Posted by Steve at 09:44:00