Spitfire: Portrait of a Legend

Recently I finished Leo McKinstry's Spitfire: Portrait of a Legend, I picked the Kindle version up cheap  a while back and had only just got around to reading if it. It is one of a trilogy of books by McKinstry on iconic British planes from WW2, the others cover the Hurricane and Lancaster. 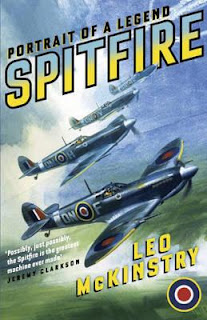 I wasn't quite sure what to expect but was very impressed by a hugely readable and enjoyable book. McKinstry effectively splits the volume into three parts; the development and political background to the Spitfire, its role in the Battle of Britain and development and role after 1940.

The section on the development and the political infighting at the Air Ministry and Westminster was fascinating, Yes Minster buffoonery is tempered by the fact that it shows how fortunate we were that strong individuals ensured that not only did we have an air defence in 1940 (the bomber own air force concept was very popular) but shows that individuals lampooned by history such as Neville Chamberlain are owed a level of appreciation that they do not get. It was also interesting to note that Churchill favoured the Boulton Paul Defiant over the Spitfire!

The Battle of Britain features a lot of first hand accounts, including German ones, placed in the context of the battle as well as he performance of the aircraft. After 1940 McKinsty covers the development of the Spitfire through its various marks as the enemy threat alters, as well as service in the fighter sweeps over France, at Malta, D-Day and the Far East, before rounding off with an epilogue cover post-war use and action over Egypt, Malaya and Korea.

I was expecting that I would just dip into this book whilst reading others but once started found it hard to put down, it is that good. If you have any interest in air warfare or general military history it is certainly well worth reading even if you already have a basic knowledge of the subject.
Posted by Steve at 15:59:00