Donnybrook: How Green are your Coldstreams? (or are they Blue?)

I had planned to paint up at least one miniature today as a test piece but spent most of the afternoon trying to help Saul interface his Roland synthesiser and MacBook, all to no avail (can these people not write in basic English?). Mind you that was not as confusing as trying to work out the facing colours of the Coldstreams for my Donnybrook force...

Yes, I thought it was green, and it certainly was at the time of the Restoration, however... I've come across a couple of blogs where the authors have painted the Coldstreams at Sedgemoor with blue turnbacks and it may be that James II ordered the Guards regiments to adopt a common uniform coat in 1685 and I've pondered this off and on today in between bouts of music tech and have concluded - I don't care, they will be green... However, that hasn't resolved all my quandries... The Osprey book has them in red with green cuffs and turnbacks in 1677 (see above) and states that this was also the case in 1684 but with red trousers and stockings.

There is a contemporary picture showing them with green turnbacks in 1680, but also green trousers and stockings (contrary to Osprey but ok for Tangiers regiment and Lambe's at Sedgemoor I believe).

I'm not sure what I will do here, I might try one in each green variation and see what I like best!

To console myself I bought another Osprey, Colonial American Troops 1610-1714, that looks fun! 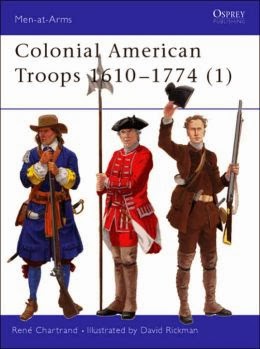