Donnybrook: First of the Mohicans...

This week has been a bit of a bust painting wise, though some progress has been made on the second Coldstream unit. The Osprey Colonial American Troops books arrived and they have led to a bit of an impulse purchase from Crusader Miniatures when ordering the odd Fallschirmjäger I needed.

I hadn't realised the late C17th was quite so interesting from an American point of view, with lots of possibilities for clashes between British, Dutch and French as well as with the Natives, so I added two packs of Crusader's Woodland Indians from their Seven Years War range to add to the Donnybrook white metal pile!

As you can see from this photo from Crusader's website, they are very nice and will make a great Tribal force to pit against Regular Army and Militia ones... 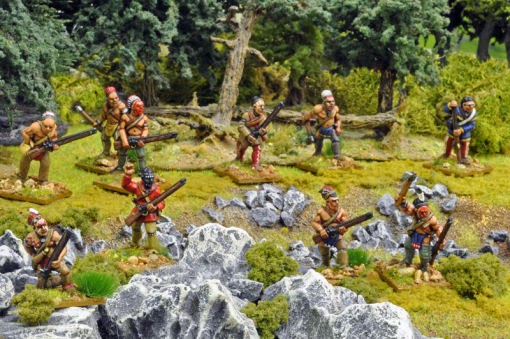