You may have seen on Jim's Wargames Workbench that book remainder store The Works* were selling a "British Armoured Tank" kit that made a reasonable approximation of a Challenger II, albeit sporting some kind of railgun instead of a cannon... Whatever, it looked useful for 28mm scale moderns with a bit of work, or near future SF with a bit of imagination. 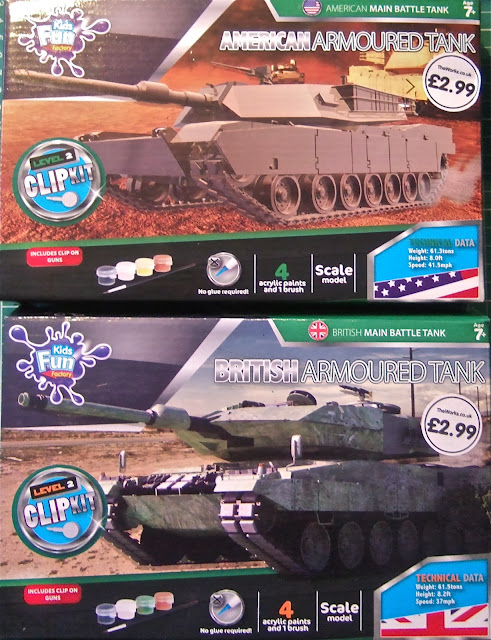 Intrigued I popped into the Bristol store this morning and after some rummaging around found not only the "British Armoured Tank" but also "American Armoured Tank" (and Attack Helicopter - an Apache, Special Force Helicopter a Black Hawk and Stealth Plane an F117). As they cost just £2.99 I bought one of each.

To call them basic is a bit of an understatement but they are reasonable approximations of the M1A1 and Challenger II, even if the latter will need a new gun and the former some filling under the gun mantel.

* Edit: I've just noticed that Jim picked his model up at The Entertainer. I'm not sure why I read that as The Works yesterday going there today to find them. Weird...
Posted by Steve at 15:46:00