(WWII Month) B is for Banzai!

Following a useful heads up from FriendlyFire, reminding me of the PSR scale comparison page it turns out that the Revell 1/72nd Japanese and Revell 1/76th (ex-Matchbox) Japanese are perfectly compatible. So I popped into Model Zone yesterday and picked a box of each up. 95 infantry for £7.98, not too shabby... 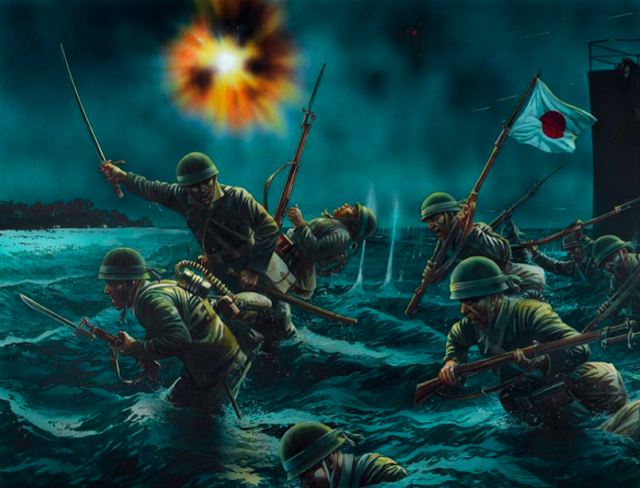 Whilst there are a few not too useful poses (the obligatory Japanese infantryman waving his rifle in the air pose), there are more than enough useable miniatures to create an Imperial Japanese platoon, which as they had four sections each of 14 men is just as well.

The only problem is neither pack contains a pose with an smg for the NCO's. This oversight is not just be a problem in plastic but metal too. I looked at both Eureka and SHQ and whilst both do very nice WW2 Japanese ranges, neither appear to have a miniature with an smg. Early War Miniatures do, but from the photo he looks quite bulky compared to the Revell plastics. It may be possible to convert one of the plastic riflemen and I suspect this will be my first stop.

It is interesting to see how much 20mm WW2 Japanese wargames kit there is available and I have spent far too long today on the For A Few Rounds More blog looking at lots of beautifully painted (and dipped!) Japanese. A useful painting resource this.

Anyway I need to stop being distracted and get back to the half painted Germans on the workbench!
Posted by Steve at 15:26:00