A little while back I picked up a few blisters from Foundry's Maximilian Affair miniatures to help expand the Camerone set from the same manufacturer that I am currently painting. Amongst them was a blister of Contra Guérillas however as with most packs in this range there was just one sculpt duplicated eight times.

This is a major irritation with Foundry's line, especially as it means that there is no variation of pose and there are no command figures. Enter Gringo 40 with their new 28mm scale Maximilian Affair range including... Contra Guérillas and command figures! Unfortunately there are only two other ranks poses but between the two manufacturers it seemed a small force of the colourful Contras in 28mm scale could be raised. 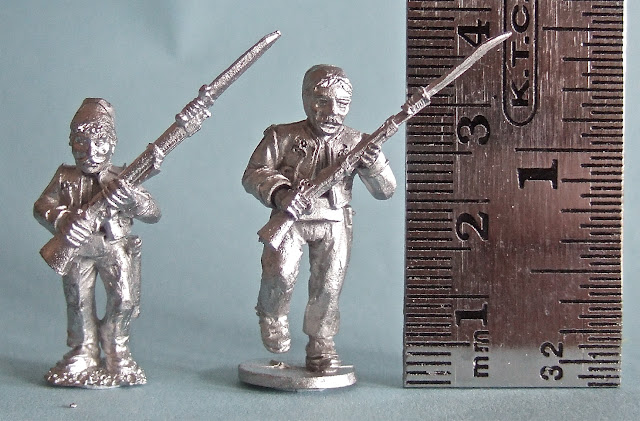 My order from Gringo 40 arrived yesterday, unfortunately they are massive compared to the Foundry miniatures... Further, upon checking them, the Foundry Maximilian figures are actually smaller than their Camerone ones which seem to fall somewhere between the the original Perry sculpted Foundry and the new Gringo 40.

This has on the horns of a dilemma. The Gringo figures are just about compatible with the Camerone set. I picked up some of their Mexican infantry and they fit in with the Militia I have already painted (ok, they are slightly larger but they work). Unfortunately neither range has enough Contras for a reasonable sized and varied unit (and of course now I want a Contra unit!)

I'm also now not sure what to do with the remaining original Foundry blisters (a mix of Imperial and Republican). I bought I'm thinking of experimenting by raising the smaller figures by 1mm with a coin between the figure base and slotta base and hoping the paintjob helps disguise the slightness of the original Foundry miniatures.

Whatever it is very frustrating that given the limited amount of 28mm scale miniatures available for this conflict, that here is such as size difference between them...
Posted by Steve at 15:51:00