As regular readers will know I love Victorian Science Fiction, however as a general rule I prefer that it is based or inspired by the scientific romances of the period rather than the more modern OTT "steam and rivets" Steampunk approach. That is not to say that I don't like Steampunk, just that I tend to like it more in graphic novels and book as opposed to on the tabletop (to my mind Dystopian Wars owes more to Moorcock than Verne or Wells).

However that may be about to change with both West Wind and North Star dangling the carrot of a plethora of wonderful looking 28mm Steampunk miniatures for 2013 in front of me!

North Star are producing the miniatures for Osprey's forthcoming In Her Majesty's Name Steamunk rules. They are currently running a pre-order scheme (amusingly called "Nickstarter") with some exclusive freebie figures thrown in with orders over certain amounts depending on the total amount of pre-order funds raised (essentially a self-run Kickstarter). The miniatures previewed are sculpted by Steve Saleh and there are some interesting looking figures there.

West Wind already have their game out, Empire of the Dead, and whilst I haven't bought it I have heard good things about it. I must confess that I was not overly taken with the first miniatures releases, West Wind already produce an impressive Gothic Horror line so I was baffled that two of the four initial factions were vampires and werewolves. However they have now launched a Kickstarter for a supplement called Requiem and miniatures wise things look like they are going to get really interesting... 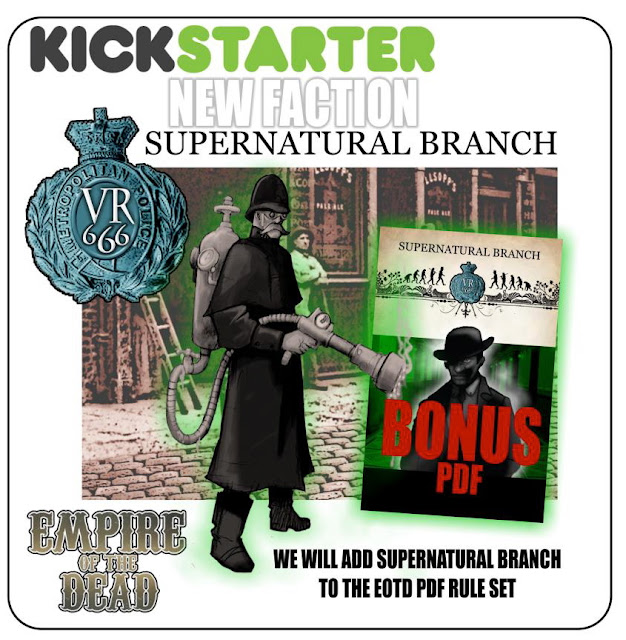 Not only is there a new faction in the form of Scotland Yard's Supernatural Branch, there is the promise of a number of fictional characters from period literature including some of Holmes' foes such as Moriarty, Colonel Moran and Irene Adler and a number of Victorian vehicles including a Black Mariah and a Time Machine (YES! A TIME MACHINE!!!).

Given West Wind's demonstrated capacity to support and develop product lines I am really looking forward to seeing the new Empire of the Dead models this year, but North Star's In Her Majesty's Name line has promise and, even if it isn't as numerous, it does have some interesting stuff such as The Black Dragon Tong (with Yeti) and Servants of Ra (with Mummy) both of which would seem to fit in with Empire of the Dead.

Hopefully the two lines of miniatures will be compatiable!
Posted by Steve at 09:54:00