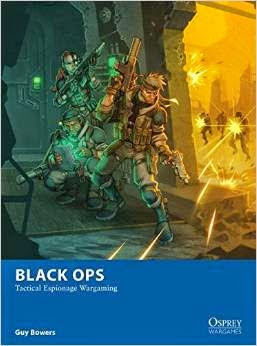 Another of Osprey's forthcoming wargames rules titles has piqued my interest - Black Ops. Accoding to the blurb "Black Ops is a skirmish wargame of tactical espionage combat for two or more players. It recreates on the tabletop the tension and excitement of modern action-thrillers such as the Bond and Bourne films, The Unit or Burn Notice TV shows, and the Splinter Cell and Modern Warfare series of video games.

The fast-play rules use regular 6-sided dice and a card-driven activation system to keep all players in the thick of the action, while the mission generator provides a wide range of options for scenarios, from stealthy extraction or surveillance missions to more overt raids or assassinations. Stealth, combat and technical expertise all have a role to play, and players may select from a number of different character types - spies, mercenaries, criminals, hackers, special forces and many more - to recruit the best possible team for the job.

Players may also choose to join a faction - powerful organizations, intelligence agencies, criminal syndicates, militaries or rebel groups, each with a stake in international affairs. By doing so, their team may receive certain benefits, but may also find itself limited at a crucial time. With the variety offered by the characters, factions and scenarios, no two games of Black Ops should ever be the same!

Although the standard Black Ops setting is an ultra-modern world just a hair removed from our own, the rules are versatile and adaptable enough to suit OSS operations behind Nazi lines, Cold War-era infiltration missions in Moscow or Berlin, or sabotage runs against a rival corporation's interests in a cyberpunk dystopia, and the rulebook will include a guide to running games in such settings."

The flexibility mentioned in the last paragraph sounds really interesting.
Posted by Steve at 21:11:00