The Fall of Denmark 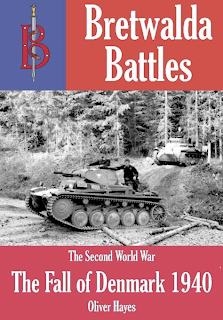 Today was the first of Saul's university interviews necessitating a trip to Southampton. Whilst he regaled them with music technology mumbo-jumbo I sat in the Uni cafe with a cup of coffee and my iPad, onto which I had last night downloaded Oliver Hayes The Fall of Denmark 1940, one of the Bretwalda Battles series of short e-books.

At around fifty pages it didn't take long to read(!) but was quite interesting although it would not have taken much research to flesh it out a bit more. Hayes refers to the Danes using 20mm and 37mm guns, it would have taken minimal effort to note these were 20 mm L/110 Oerlikon and 37 mm L/37 Bofors anti-tank guns... That said the e-book only cost 75p so perhaps I am being overly pedantic.

From a gaming point of view  the invasion and capture of Denmark may seem to have little potential but there was some notable resistance from the army, notably by the Royal Life Guards at the Amalienborg Palace, at Sølsted and the military base at Harderslev. That the German invaders suffered over two hundred casualties, lost six armoured cars and had six others along with four tanks damaged demonstrates that the shortest military campaign was certainly not just a parade into Copenhagen. For gamers interested in the mass armour 'car park' games like FoW, the invasion of Denmark offers nothing, however platoon and section level battles using Bolt Action or similar have potential.

Aside from the historical fighting there are also some interesting hypothetical possibilities which could make it an interesting theatre for gaming from the Danes not surrendering so quickly with the King following General Pryor's recommendation to keep fighting until the British or French could land troops to the German raison d'etre for the invasion (to forestall an Anglo-French invasion which would threaten the northern German border).