Expedition to Book Mountain (and Five A Day Dog) 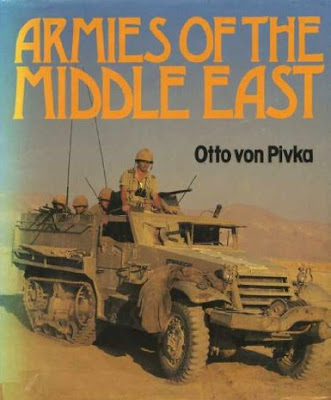 Tank Battles in Miniatures 5 has an interesting bibliography that I began to investigate, one of the books was Otto Von Pivka's Armies of the Middle East published in 1979. Upon further investigation my immediate reaction on seeing the cover was that it looked very familiar...

Yep, somewhere high up Book Mountain (a sister peak of Lead Mountain) I found I already von Pivka's book and it is excellent. Not only covering the armies of all the Middle East nations (from Tunisia, via Ethiopia to the Emirates with basic uniform details great for identifying suitable 6mm miniatures, it contained an excellent synopsis of all the wars from 1948 to 1978 (not just the Arab-Israeli ones) and an atlas of the Middle East Wars. Great stuff.

Alongside von Pivka I rediscovered Samuel Katz's Israeli Tank Battles (covering Yom Kippur and the invasion of Lebanon), Edgar O'Ballance's No Victor, No Vanquished, which if I recall is a pretty decent unbiased account of the 1973 war and General Avraham Adan's The Yom Kippur War, a personal account of an armoured division commander also published as On Both Sides of the Suez and On the Banks of the Suez.

I just need to find some time to read them now...