The Return of Thane Tostig? 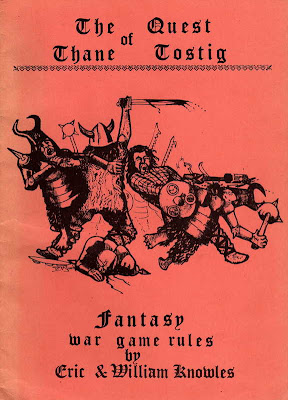 David Wood posted an excellent piece on his Dear Tony Blair blog the other day about the Barry Minot Thane Tostig miniatures and rules from the late seventies.

For those of you too young to remember the excitement the Minot adverts in Battle for Wargamers bought and the sadness of how far your pocket money would not stretch, The Quest of Thane Tostig was a set of fantasy wargames rules set in Dark Ages Britain. Minot's Miniature Armoury produced a range of miniatures including Tostig and his companions and the evil Sprites foes, as well as some skeletons and monks. A list and photos of the range can be found on the Lost Minis Wiki here.

Reading David's post and painting the Dux Bellorum Arthurians I have begun to ponder the possibilities of continuing Tostig's quests using modern day figures, after all the heroes are historical types, skeletons and monks are readily available, it is just the Sprites that would need a good proxy.

I think this has potential, I will re-read the rules (which I have) to see whether it will just be the background that makes the transition or whether the rules themselves are useable. It will certainly need some work as the rulebook only contained one adventure against the Sprites with the background including fights against Grendel, a two-headed giant and a dragon, but it could be a a fun small project making use of existing miniatures...
Posted by Steve at 00:19:00