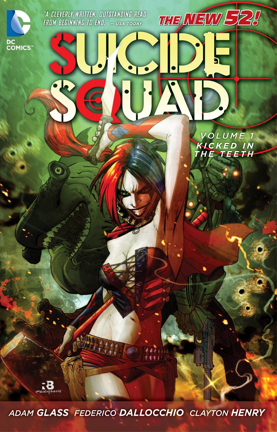 Following on from my post about the New 52 Batman titles, I was perusing Amazon and noticed they were selling the Kindle version of Suicide Squad volume 1 for just 49p (the paper vesion is £7.69). Suicide Squad, if you are not familiar with them from the comics (or the Arrow TV series) are a group of super-villians, used by the US Government for deniable covert black ops - the first mission in this book is to kill all 60,000 people in a sports stadium, I won't spoil the why...

The squad has a changing membership, the rumours of the film in production includes the Joker, but here we have Deadshot, Harley Quinn and King Shark amongst others.

Obviously this means you can potentially use any bad guys in your DC superhero collection for Suicide Squad games, and although I am only half way through volume one, there certainly is a lot of potential here...
Posted by Steve at 22:10:00