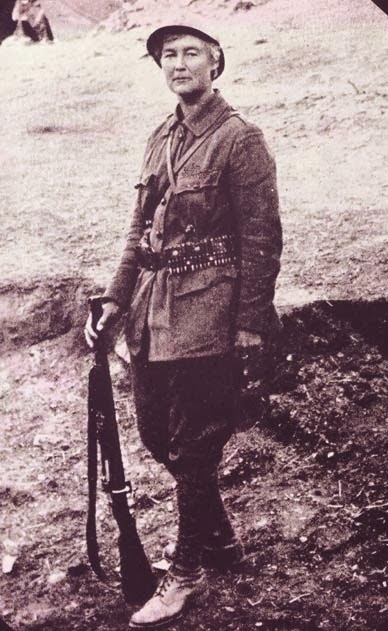 Following on from last year's post on International Women's Day I decided that I would make this an annual event on the blog, posting about women at war. With the 100th anniversary of the start of the Great War this year I thought it would be interesting to post something about this conflict and Flora Sandes, the only British woman officially to serve as a soldier in World War I.

Initially she served with an ambulance in the Serbian Red Cross but after she was separated from her unit during the retreat into Albania she enrolled as a soldier with a Serbian regiment. Promoted to Corporal she was seriously wounded in 1916 by a grenade whislt engaged in hand-to-hand combat at Bitola. She received the highest decoration of the Serbian Military, the Order of the Karađorđe's Star and was promoted to the rank of Sergeant major (and to Captain after the war)

She published her autobiography, An English Woman-Sergeant in the Serbian Army, which is available on Kindle for under a quid and a proper biography; A Fine Brother: The Life of Captain Flora Sandes by Louise Miller is also available describing her life (including being captured by the Gestapo in 1941!)
Posted by Steve at 17:22:00