Unfortunately work has been extremely busy this week which, coupled with the effects of a cold earlier in the week, meant I've not managed to get anywhere near as much done this week as planned. However I have today managed to finish off the two Skytrex Nieuport-24's, one from the Slavnensk Air Group, complete with skull and cross bones and yin-yan symbol, the other from an unidentified Special Purpose Air-Group, with black tail. 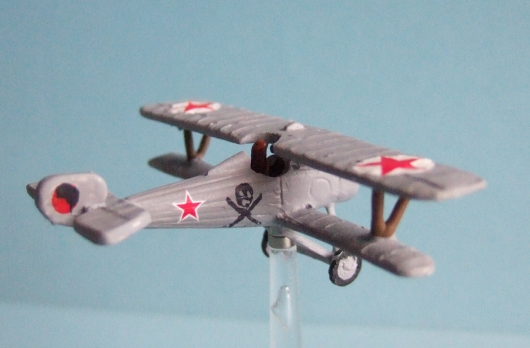 Russian built Nieuports were painted overall grey though subject to some fantastic art work on the fuselage. Some of the Soviet designs of Death dropping bombs etc are amazing, albeit probably too small for 1/144th models. Looking at the models now I think the grey I used is a trifle too dark but I they're ok for wargaming. 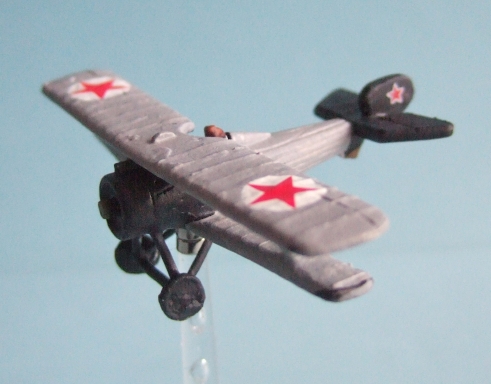 Officially today is the end of Air Month but with just six models finished I will continue into April, especially as I never got anywhere near my French or the planned German re-paints (and I need to get these done for the 2nd edition of AirWar: 1918 which just needs the pretty pictures).

It was interesting reading Tas's thoughts on his first project month at Man Cave and he makes some sensible points about pre-planning and trying to do a little something every day. Ok, I've no hope of doing something every day due to work, but this month I could have been more productive on the plane side by spending the odd ten minutes putting another coat of NATO Green on a 'Harry Tate' rather than playing on Facebook. Given April sees me working away every week to some extent apart from the last week I need to be a bit more disciplined!

As to next month, aside from continuing the aeroplanes, I haven't quite decided but have seven hours to decide... :-)
Posted by Steve at 17:29:00