A little while back I picked up a copy of Normandy Firefight, Warwick Kinrade's "detailed skirmish combat rules from WWII" from North Star. Like most wargamers I buy far more rules than I will ever play but the fact that these rules were designed for extremely small scale skirmishes of up to around five figures a side and used 1/35th miniatures, my interest was piqued. 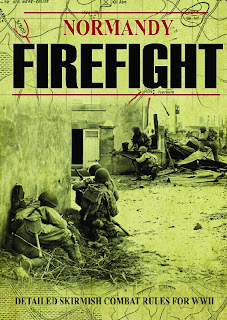 The rules are very interesting using a two second action move, detailed wound location and recording of ammunition expenditure. This might sound a bit too much but I was extremely impressed how Warwick combined the to-hit, hit location and damaged caused in one D100 roll (and I love percentile dice). Overall the mechanisms seem quite elegant and simple for such a detailed game.

I do have some reservations such as the lack of an overwatch rule to allow opponents to shoot at miniatures running from behind one piece of hard cover to another (eg. from house to house) but I think that I'd really need to play the game before critiquing further.

At this stage probably not. The concept intrigues me, I used to love sticking Airfix Multipose and Tamiya figures together (and there are some in the attic IIRC) but at the moment I don't want to slip into a new scale. The game can be played with 28mm miniature or even 20mm ones but I guess much of the fun is using the larger scale models.

Even with one part of my brain saying no, the creative part is pondering 54mm infantry combat in Italy or Burma!