October was supposed to be Zulu month under the August Plan but not an "uSuthu" has been murmured in Blease Towers so I will be revisiting the plan for November and December after some more ruminating...

In the meantime whilst trying to finish off the Athenian cavalry (almost done now) I took the opportunity to put the finishing touches to some jungle terrain I had been working on and off on for some time now. 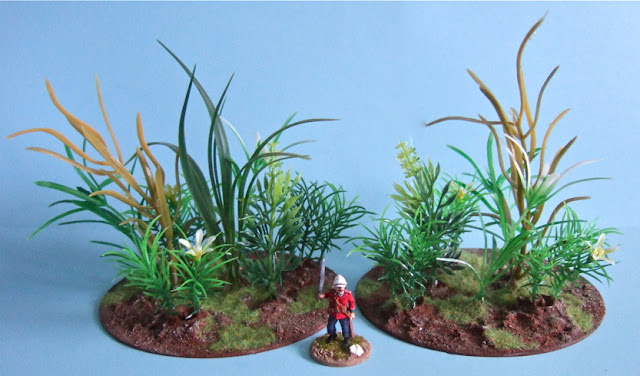 Construction is really simple. A variety of tropical fish foliage pieces were hot glue gunned to some old CD-R's, the base area then sanded, painted and flocked (well two have, I noticed when taking the photos I have forgotten to do six of the eight!).

Originally I had in mind using them in some 28mm Darkest Africa and Warhammer Lustria games but realised they they are so non-scale specific that they could also be used for 15mm Tusk type games as well as 54mm Burma Firefight games.
Posted by Steve at 14:13:00