As previously stated Christmas brought the unexpected present of the GW Eternity Stair/Dreadfire Portal boxed set. Whilst I haven't bought the Storm of Magic supplement, both items are useful enough as general scenery items and you can't have enough scenery can you? :-) 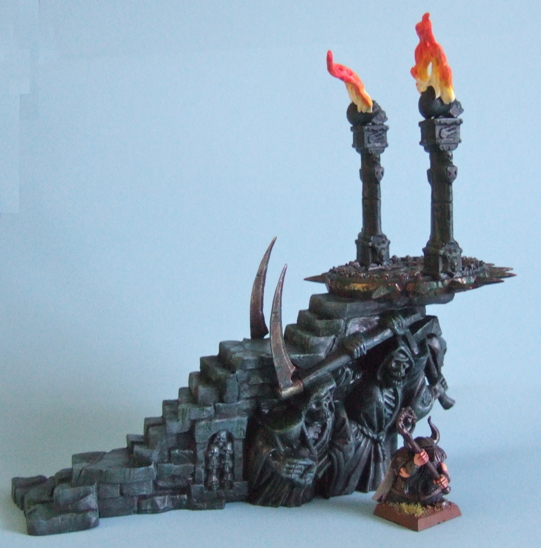 Whilst I have made both up I have only painted the Dreadfire Portal so will concentrate my observations to this half of the kit. First off I must say that the Portal is probably the worst fitting kit I have made in decades. The detail is fine but the decision to mould the long stairway as a one piece means that it does not fit the two halves of the main body very well at all and in the end I took the decision to snap the stairway in two and fill the gap. Filling is a must on the model but is an easy job with the new Liquid Green Stuff, if I had used standard Green Stuff it would have been a very long and laborious job.

I had wondered whether I had just got a box with a badly fitting piece but a quick surf of the internet shows I am not alone in having this problem. It is not insurmountable and shouldn't detract from what with a little effort does build into a great looking piece of scenery, but it is worth being aware of the problem and I think snapping the stair in two is the easiest solution. 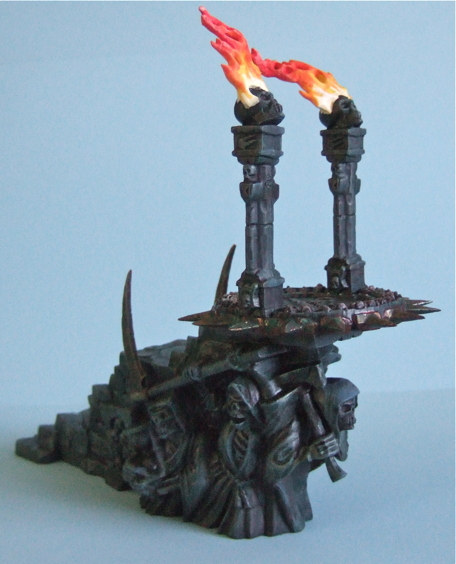 When it came to painting I wanted to do something totally different to the painted example on the box (that so many gamers seem to have copied, why?). Looking at the model I decided that it was going to be an ancient construction, dark to reflect an evilness and weathered in such a way as to give the impression of being somewhat damp.

Working up from a black undercoat with green washes and grey drybrushing the end result is a tad more grey-green than I planned but not so much as I am unhappy. I also used some Devlan Mud to dirty up the model notably around the areas near the ground and on the edges of the stairs, the centre being clearer to show where those that have climbed the stairs have rubbed away some of the moss of grime. 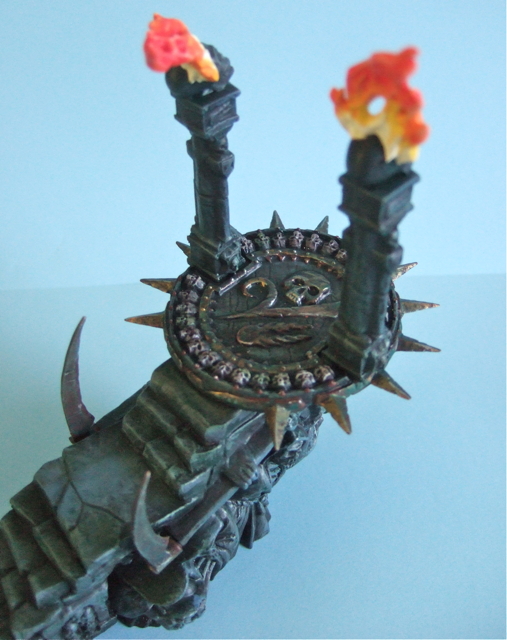 In keeping with the stonework I decided the metal needed substantial weathering as well. Wishing to avoid iron (not very good for magic) I decided on the metalwork being copper/bronze. Fortunately the current White Dwarf shows some really good examples of verdigris weathering on their undead army's bronze armour. Unfortunately it does not tell you how they achieved the effect. However a bit of Google-fu found this useful article on the GW website showing how they painted Dark Bronze on a Skaven Doomwheel which I followed step-by-step (the initial undercoat of a mix of normal and metallic paint was not one I had tried before but worked well).

Finally it was a decision on the flames which I'd rather not had on the model but are moulded onto the skulls. I did consider the unearthly green balefire look GW give their undead but decided regular red fire would provide a better contrast to the grey-green model. For small (candle, torch) flames I have a simple white-yellow-orange-red technique that works well enough but these flames were substantially larger than Dwarf candles so I did some research and came up with this excellent article and guide to painting flames which I followed by and large. The flames are pretty smooth so are not too receptive towards glazes and drybrushing but the end result is ok. 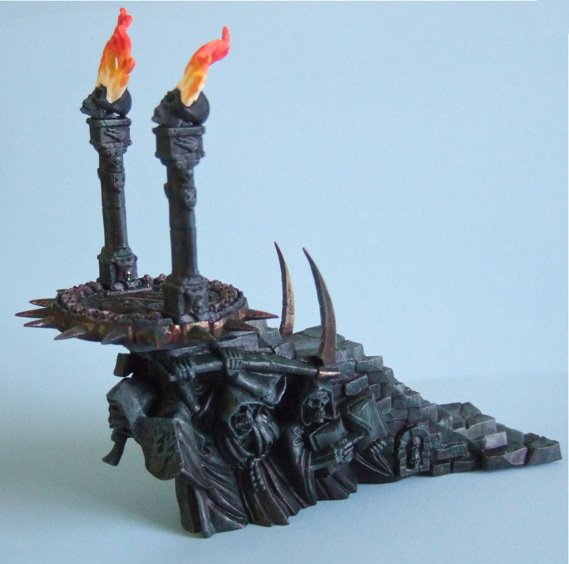 Overall I am very pleased with the end result and any issues with the fitting are not beyond an average modeller with basic skills.
Posted by Steve at 12:17:00