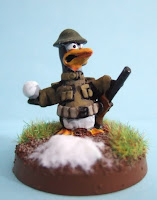 Those of you with children (or grand-children) may be aware of Club Penguin, a "free to play" online game run by Disney. A lot of fun for kids of all ages, there are those that take it more seriously than others and form unofficial groups which "battle" against each other, first amongst these is the Army of Club Penguin!
Whilst Saul has moved onto the likes of Black Ops and Red Dead Redemption I thought he'd find it fun if I bought him some penguins to wargame with and so for Christmas he received a painted squad of Team Frog's Critter Commandos penguins (and what wargamer hasn't ever wanted a unit of the elite Killer Death Penguin Commandos?) 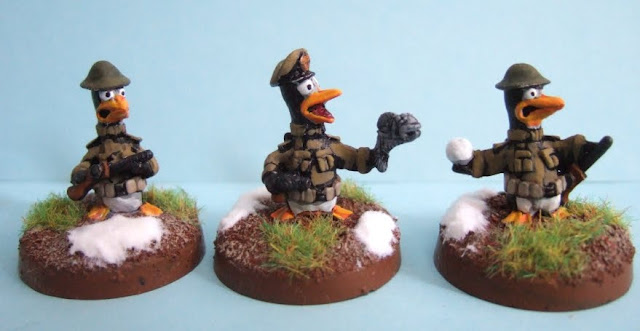 You get twelve figures in the squad including officers, grenadiers, troops and power armour (the latter not quite finished) and I must confess that after some false starts I had a lot of fun researching (Googling cartoon penguins!) and painting these models.