Playing some games of Outremer at BIG over the last couple of weeks led in a round about way to conversations about colonial wargaming and George said he fancied trying out Osprey's The Men Who Would Be Kings and would I be interested if he brought along a couple of Field Forces for it, even if they were only undercoated? Of course I would...

We will be doing Sudan as George has a number of boxes of Perry Madhists which he said he would try and stick together over the weekend and after a little pondering (and reading the rulebook) I thought I could jump in by raising a British Field Force, three units of Regular Infantry requiring the same number of figures found in one box of Perry's plastic British Infantry (Afghanistan and Sudan) 1877-85, so I popped in BIG on Friday and bought a box. I just need to find my Bengal Lancers now to complete a 24 point Field Force...

Over the weekend I've stuck them together and based them, along with three Warbases 12 figure movement bases which I had sitting around... 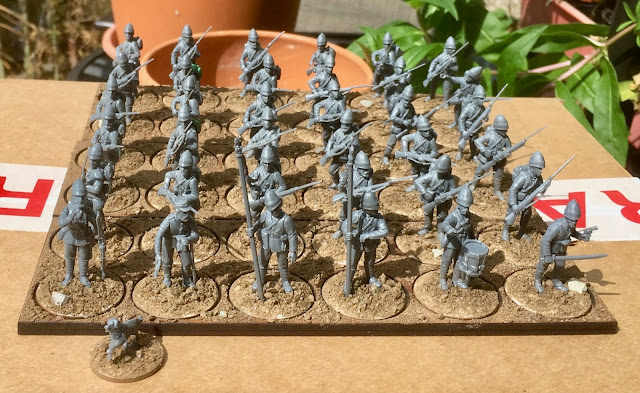 Now whilst George is bringing along a pile of Madhists, I have to confess that the North-West Frontier floats my colonial boat more so I have used the Afghanistan covered pith helmets rather than the uncovered Sudan ones and will paint them up as the ill-fated 66th Berkshire along with the regimental mascot Bobbie, who is also found in the box.

The figures look perfect for a dipping approach, so I am going to spray them a bone colour and see if dip will darken that to a Khaki look, otherwise I will find a darker sand colour and use that.

Postscript: As the BBC Weather forecast got it wrong and it did not poor down with rain after lunch, I sneaked outside and undercoated them... 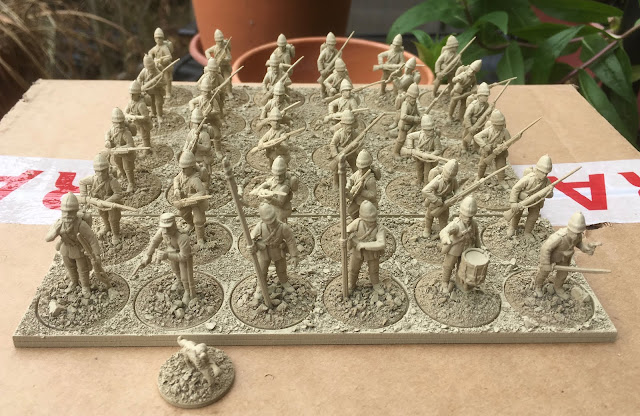 Email ThisBlogThis!Share to TwitterShare to FacebookShare to Pinterest
Labels: Colonial wargaming, North-West Frontier, Second Afghan War, Sudan, The Men Who Would Be Kings