Rebels and Patriots: The Catawaba Conundrum...

Back to North America and a great four-player Rebels and Patriots game played with Matt and myself on the brave, noble, Patriot side resisting the oppressor Tory George, assisted by Steve and his cabbage munching mercenaries...

As Matt's Native Americans had not managed to batter anyone with their tomahawks in the first game he and Steve played, I suggested we tried The Enemy's Enemy scenario from the rulebook with each player having 24 points a side and the Natives being neutral in the middle. In the scenario the two sides try and reach the Native village first and the occupants then dice to see if they become allies of one side or the other, or enemies of both... 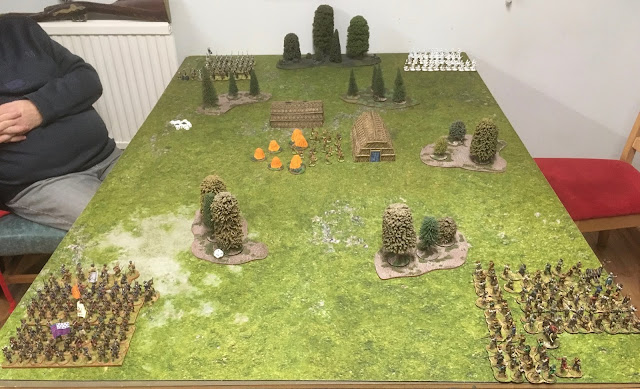 On the American left flank, two units of Continental Line advanced to stop the Hessians moving on the village, whilst the Virginia Rifles occupied the woods... 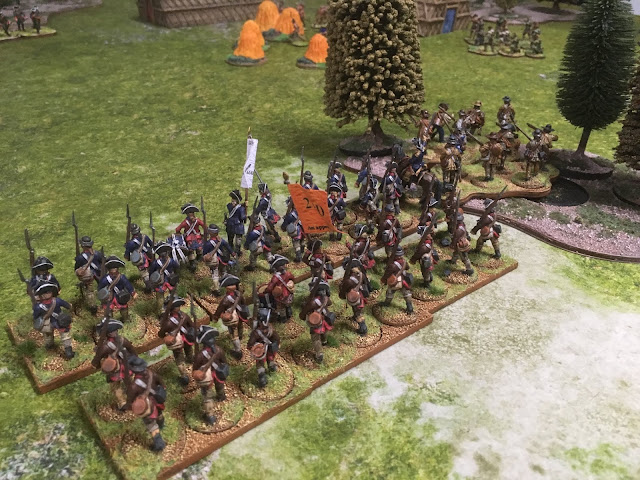 Steve's Hessians themselves marched forward, deploying a screen of Jägers... 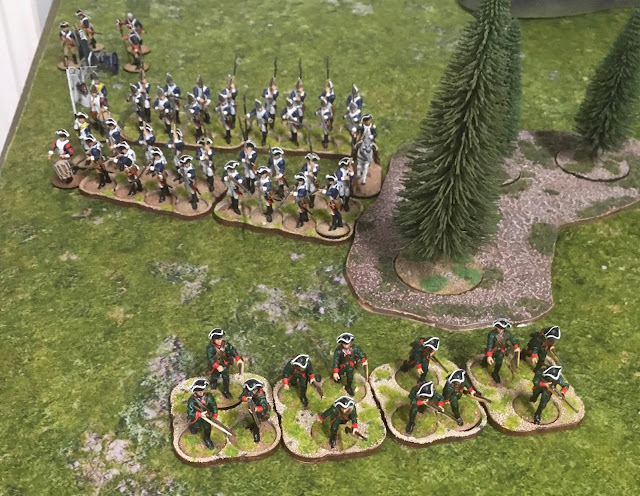 On the American's right flank Matt's militia advanced swiftly towards the village, aiming to get within 6" and trigger the Native Catawaba tribe reaction test gaining an Honour point... 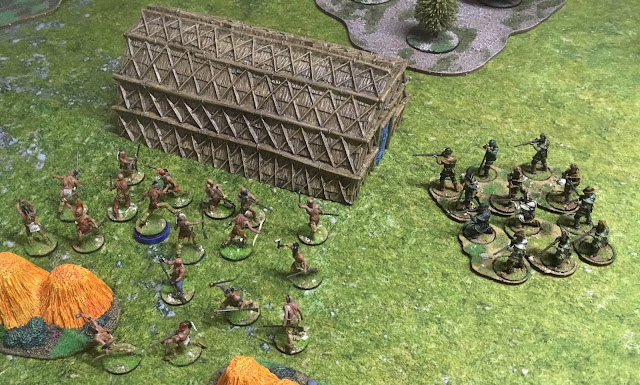 Unfortunately his Militia took one look at the fierce looking Catawaba natives and refused to advance! 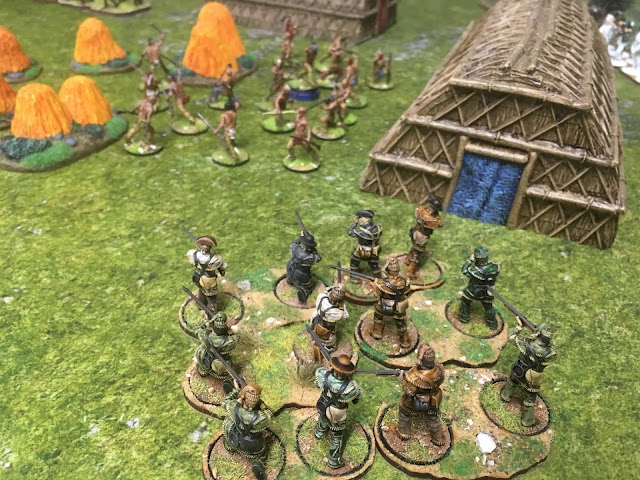 This allowed the Queen's Rangers to seize the initiative and close on the Natives, triggering the reaction test and gaining the Honour Point for the British! A d6 was rolled, what would the Catawaba do? 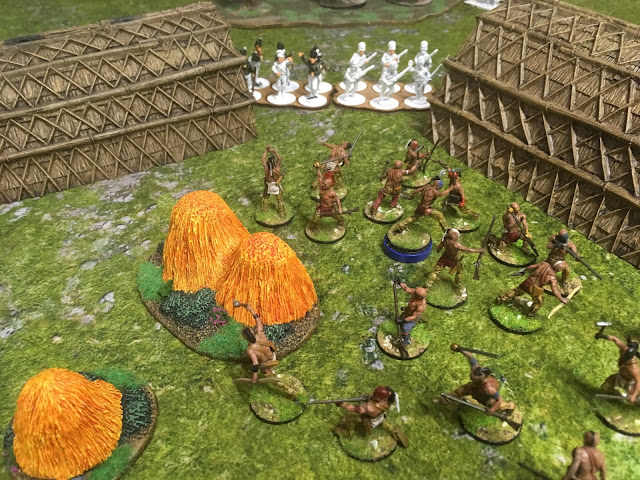 George rolled a 1! The natives side with no one and immediately attack the nearest unit - the Queen's Rangers who were beaten back having suffered several casualties!

(The scenario is unclear what the Natives are then supposed to do following this, so we decided they would fall back to their starting point and charge anyone who got within 6" if they passed an Attack action...)

Meanwhile on the American left the Continentals started a brisk exchange of musket fire with the advancing Hessians... 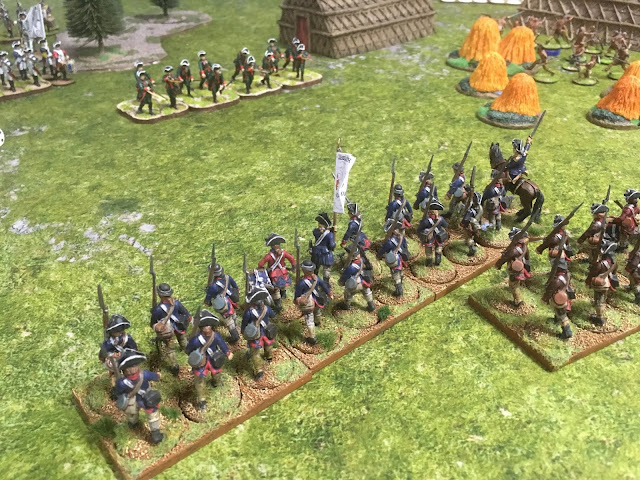 Unfortunately my dice rolling was pretty abysmal and Steve's not, and soon he started knocking huge holes in the American line. 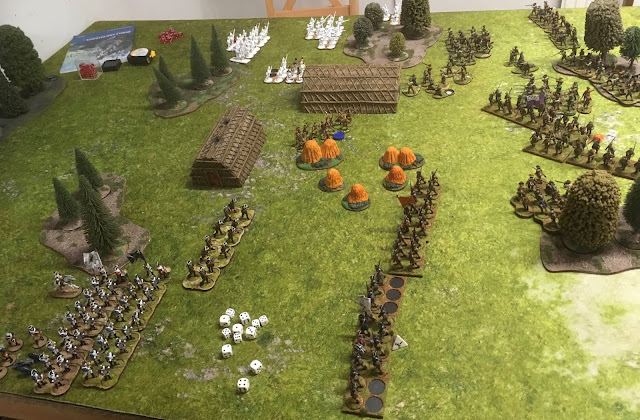 With the gods of dice favouring Steve, I decided to bring up two units of Militia to support the Continental Line and move the Rifles forward to engage the Jägers... 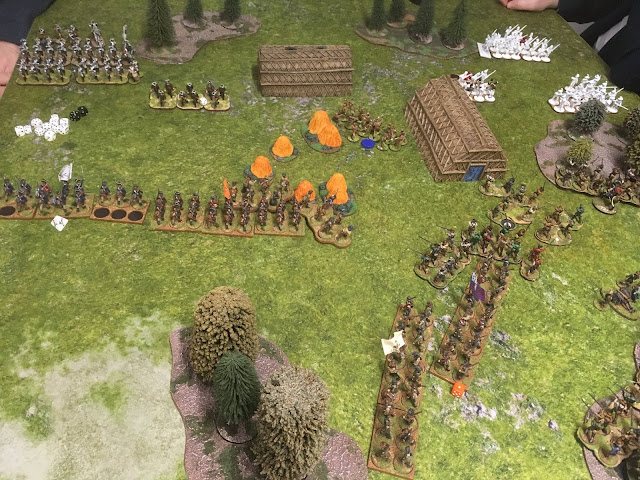 However, despite killing some of the Jägers, Steve's Hessians concentrated their fire on the 1st Maryland taking it under half strength and inflicting a permanent Disorder marker on it. Taking a second, the unit was now Broken and in danger of Routing... 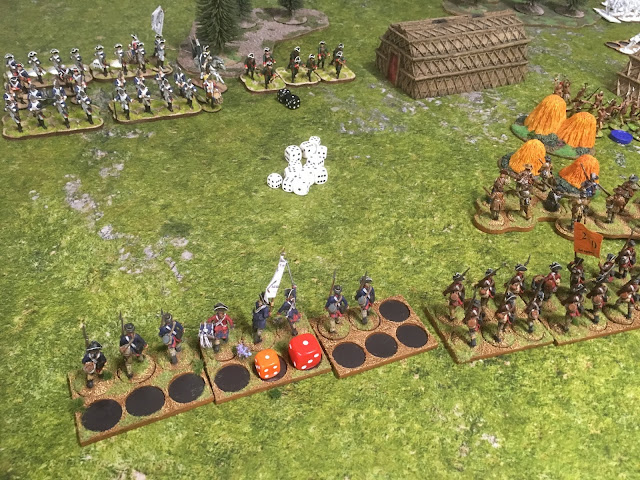 Fortunately it survived the Morale check and despite taking even more casualties, was now only Disordered. 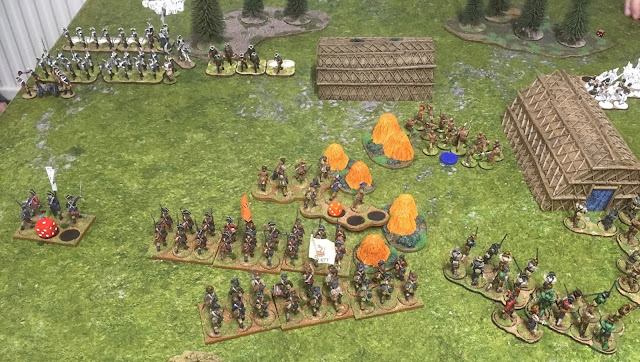 As the Militia moved up to support, the Hessian artillery and Musketeers von Bose opened up on the 2nd Maryland, inflicting four casualties and two Disorder markers on it meaning this unit was now Broken! 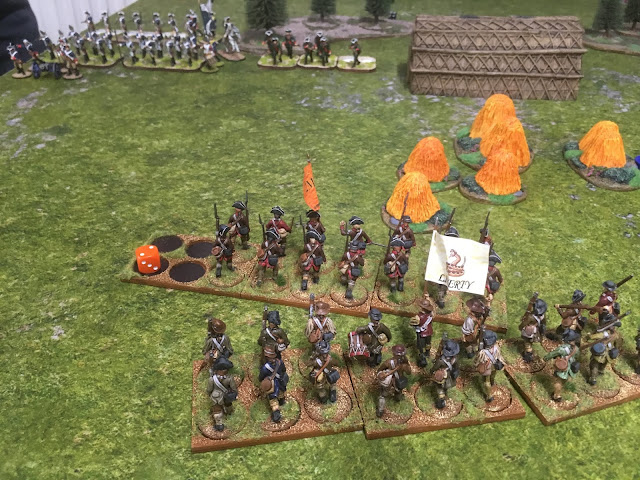 On the right flank, things were slightly better. Matt when ordering a unit of Militia to advance rolled a double 6 and rolling on the appropriate table received 4 points of reinforcements. Fortunately I had a spare Militia unit not being used that now entered the fray! 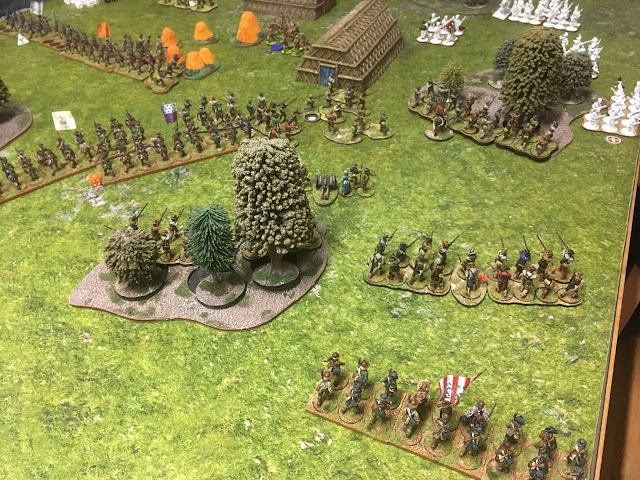 A battle of attrition broke out on the right as Matt's militia fought George's British Light infantry and Shock Highlanders for control of a wood. 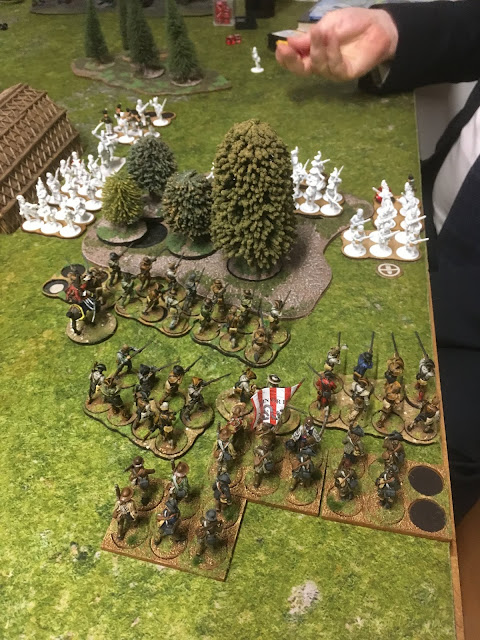 Despite some impressive dice rolling by Matt... 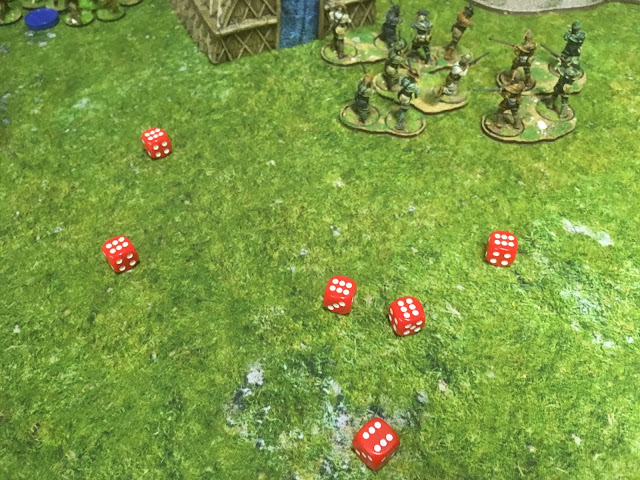 ...he was understandably struggling to hold back the better trained British units.


In the centre, my Virginian Rifles, having taken a couple of casualties skirmishing with the Jägers and becoming Disordered, got a little too close to the centre of the native village and the Catawaba attacked them! Another failed test and the unit was now Broken! 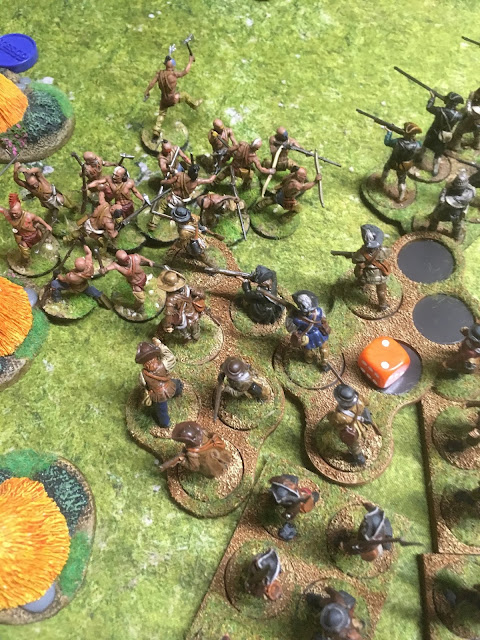 Matters then got even worse, as the Catawaba Followed Up their Attack, inflicting more casualties on the Virginians who then Routed! 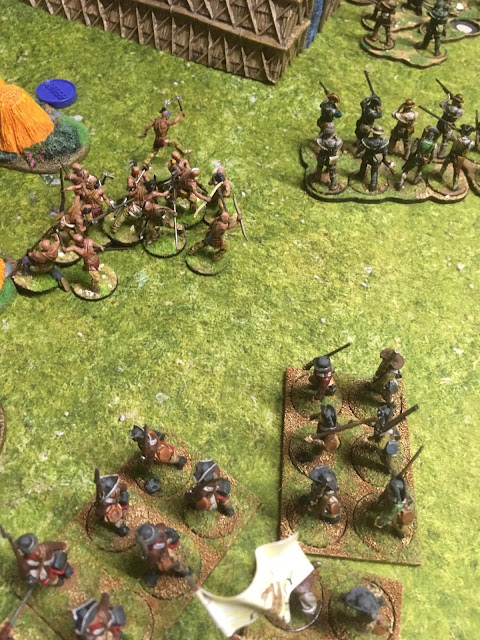 With the centre and left in disarray, Matt's forces on the right flank bravely tried to hold back the British, but soon found themselves Broken and needing some good Morale rolls to not join the Virginians in Routing off the table. 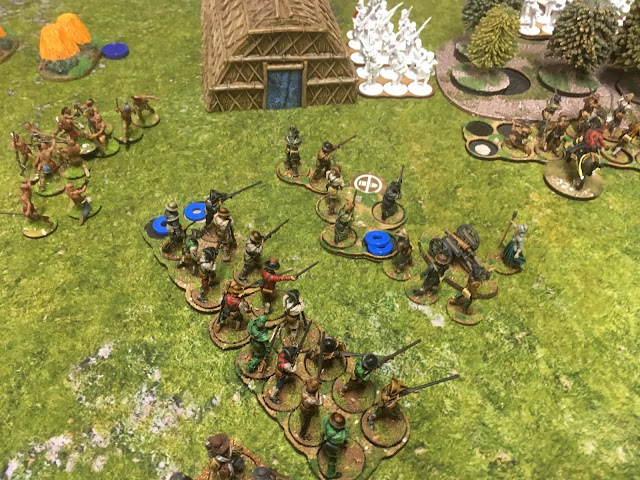 Would they have? We did not find out... After turn 8 you roll a d6 and if the score of that added to the number of turns played is 14 or higher then the game ends. It was turn 10 when I rolled a 4, so that was that.

Despite the battlefield performance of the Americans (well my flank), no one had been reduced below 1/3 strength (I was close!) so no Honour Points were gained there and no one was within 6" of the centre at the end so no Honour there either. In the end as George's Queen's Rangers had triggered the Reaction Test early in the game, the Honour Point gained there proved crucial giving the British oppressors and their Hessian cabbage eating mercenaries victory! (though in my opinion the true victors were the Natives!)

All in all another good game, the performance of my troops was pretty disappointing, the fault of the dice not their general I am sure. Matt's militia performed well and spent some time trading blows with the British Shock Infantry, not running away as they had done in the first game.
Posted by Steve at 21:48:00