Rebels and Patriots: The Battle of Guilford Mill

With Steve and Matt having broken their AWI cherry with Sharp Practice, George and I decided to rope them into a game of Rebels and Patriots, ambitiously hosting a 48 point a side game loosely based on the Battle of Guilford Courthouse. As with our earlier games of TMWWBK we are painting up forces as we play games, but as you can see we are getting there! 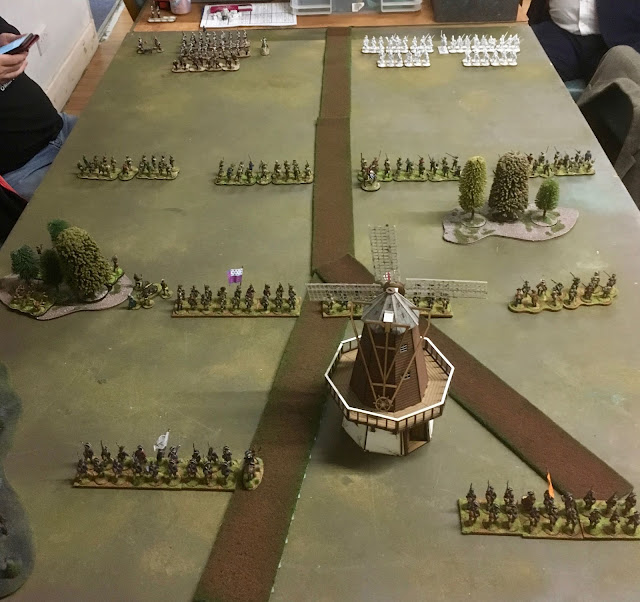 The American plan was to wear down the advancing Loyalist army before unleashing their Continental line on the weary survivors. This would mean that the front line of the North Carolina Militia would need to inflict a number of casualties before inevitably breaking. Well they achieved one of those things... 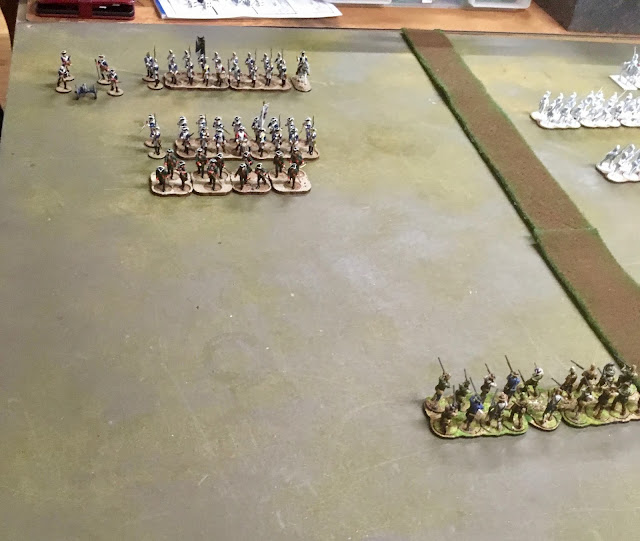 A couple of turns in and one unit of the North Carolina Militia run away after being shot at by the Hessians leaving a huge gap in the Patriot line! 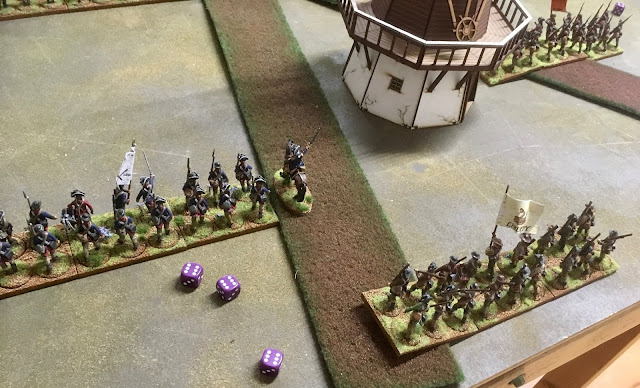 However as the 1st Maryland Continentals moved up they rolled a double 6 on their activation roll.  This means something good happens and rolling another 6 I consulted the table on page 22 of the rules - huzzah!, another 4 points of troops! Having a spare unit of Virginia Militia I brought them onto the table.

Elsewhere George's Highlanders rolled a double 1, meaning something bad happens! He rolls a D6 and gets another 1 (I kid you not) meaning the Highlanders mistake the nearest friendly unit for the enemy and fire at them. With the first round of fire giving a +1 on dice rolls this looked bad for George but fortunately for him the nearest unit was one of Light Infantry which take 3 hits to kill not 2 so only 2 redcoats fell to the friendly fire! 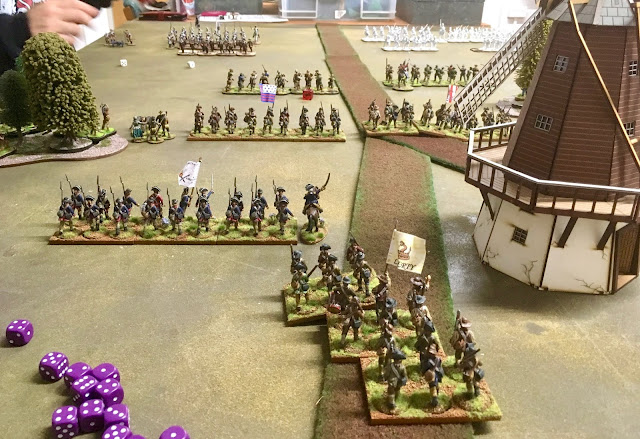 Unfortunately the newly arrived Virginia Militia where clearly confused by the smoke of battle, rolled a double 1 and then a 1 on the table, firing their first volley into the 1st Maryland in front of them killing four! This was probably my best firing roll of the game! 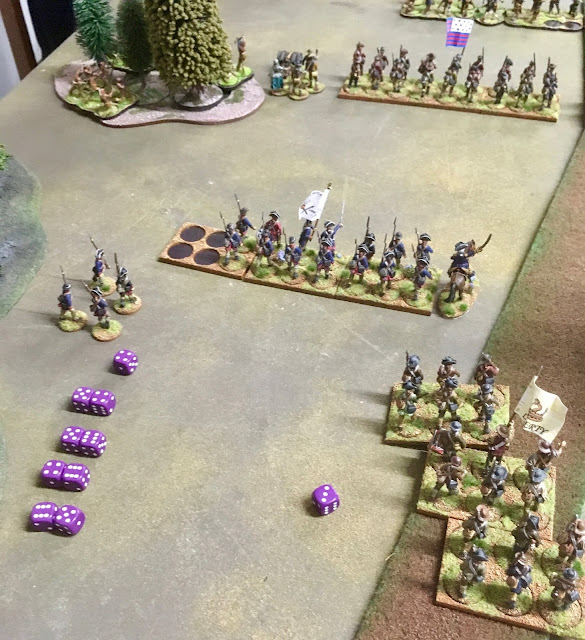 Elsewhere the first line of Militia were beginning to wobble as the Loyalist army poured fire into them... 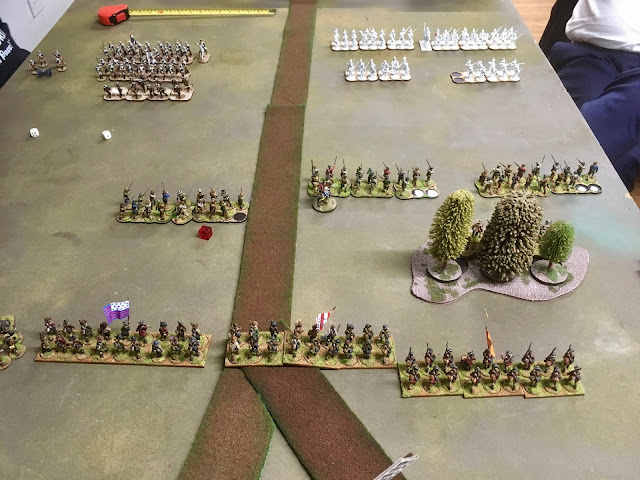 ...and soon they broke with two units routing and one barely holding out despite Matt's leader falling to British Light Infantry fire! 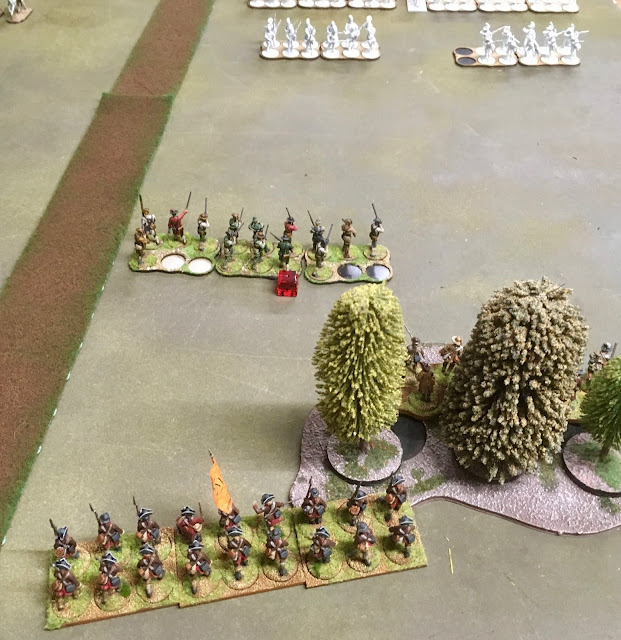 The 2nd Maryland move up and the Virginian Rifle Corp move into the light woods to engage the British, but the sudden collapse of the North Carolina Militia had a negative effect on the next line of troops with the Virginia Militia failing Morale tests and becoming Broken. 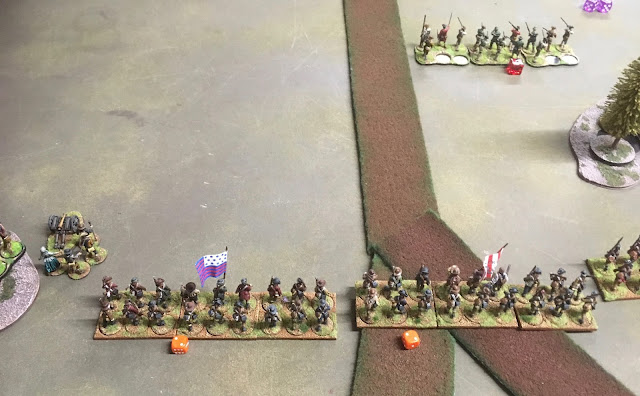 Having spent many hours painting up his Militia, it was a sad sight for Matt to see them all hiding in his carry box and not being on the table! 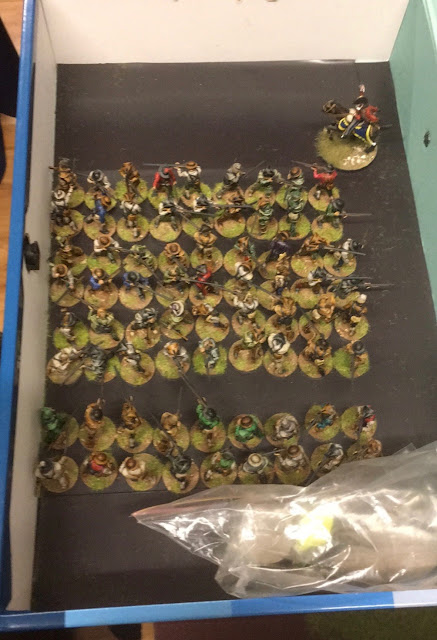 That said, despite not having inflicted a large number of casualties on the Loyalists as planned, they had considerably slowed their advance and as time ran out for us, the battle looked like this... 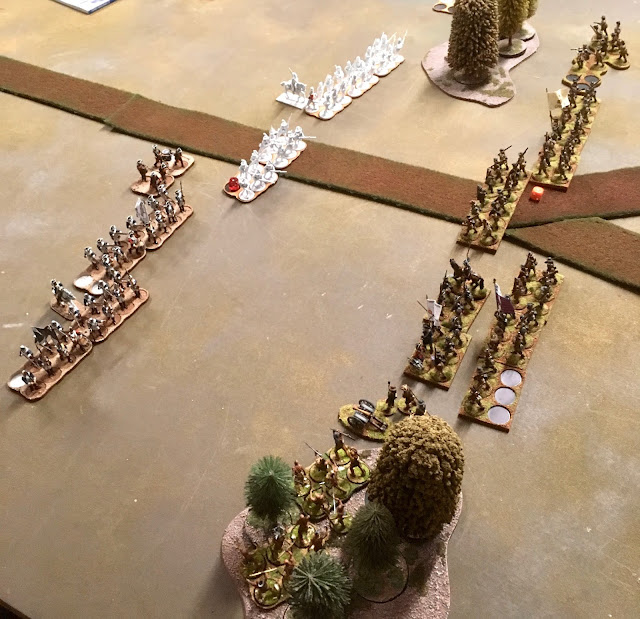 Despite us running out of time, Matt and Steve enjoyed the game. I would have liked to see the Indians get into hand to hand combat with the Hessians but they failed an order roll in the last turn, so we'll have to wait another day for that...

Whilst only a learning game, in retrospect, we probably should have put a turn limit on the game to encourage the Loyalists to advance up the table quicker and not stand around trading shots with the North Carolina Militia. That said it was still fun and hopefully next time Matt will have some better dice rolls and his Militia stand around and get some more shots off!
Posted by Steve at 12:04:00