The Men Who Would Be Kings: The Sand of the Desert is Sodden Red

Our correspondent is happy to report the wondrous news that the Dervish has been defeated and the British Army stands proud victor in the deserts of the Sudan!

Tonight at BIG George and I decided to try the Run to the Hills! scenario from The Men Who Would Be Kings with 36 point Field Forces. Set after a big battle, the defeated defender must retreat across the table length, with the attacker trying to stop them. George and his Mahdists were the defender in this game and had to set up along the short length of the board. I then had to deploy half my force in one half of the board, the remainder in the other half. As you can see I set up my machine gun, Bengal Lancers and Bazingers in the half nearest the Mahdists with three units of Regular Infantry behind them. 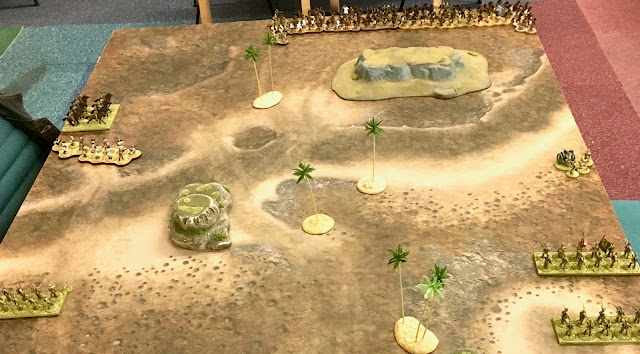 Given my previous experiences of Bengal Lancers versus Beja Veteran Tribal Infantry with sharp pointy sticks, I quickly pulled them back to use as a reserve later in the game. The Bazingers, led by a leader with a Destined For Greatness trait, took aim at the advancing enemy! 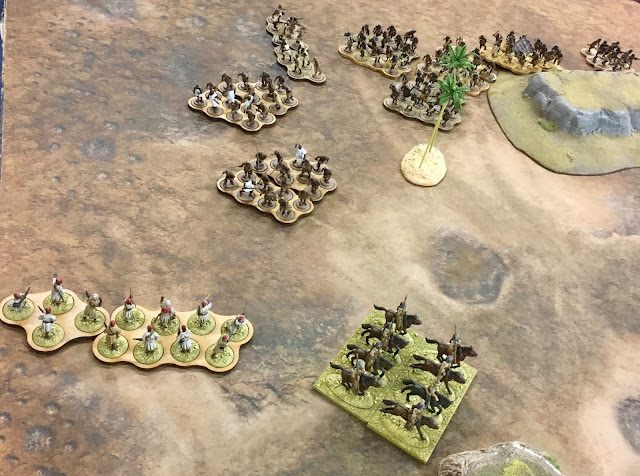 The Bazingers opened fire killing three of the advancing Beja and pinning them. The Bazingers were then able, due to their leader, try and move, and having successfully rolled fell back six inches in good order! 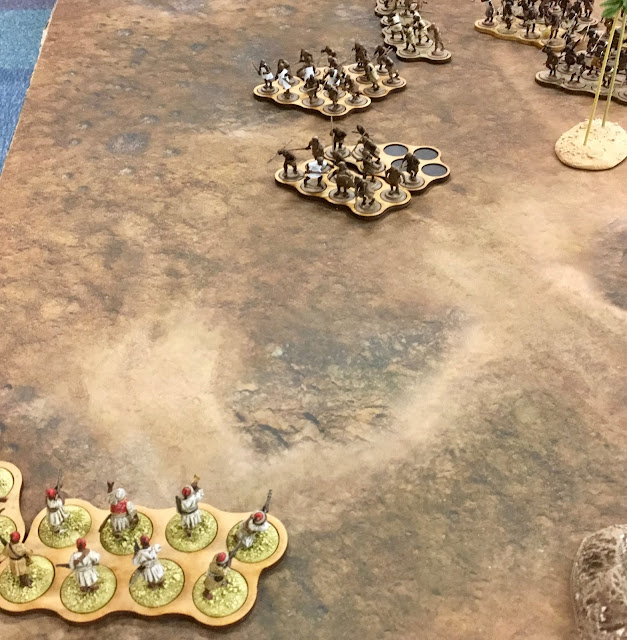 Elsewhere the Regulars started to move into position. The 1/66th formed into Close Order behind the Bazingers (the d4 is used to indicate they are in Close Order), whilst the 3/66th moved up on the right. The 2/66th decided not to move, which was a pain as their leader had rolled up a Short Sighted trait and so the unit would only fire at short range! 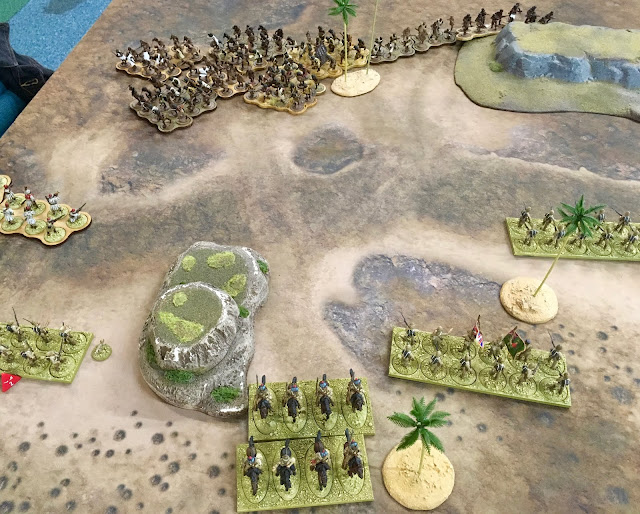 The Bazingers were having a great time firing and falling back, managing to rout a unit of pinned Beja who failed a rally test rolling 2 on 2D6. 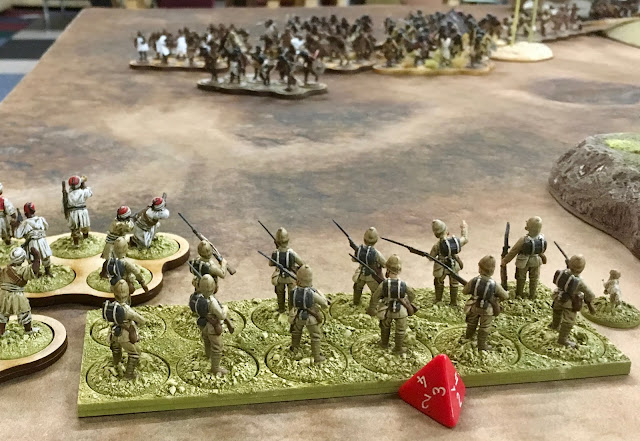 The Bazingers then retired behind the 1/66th, who stood in Close Order poised to unleash volleys of disciplined rifle fire on the advancing Mahdists! 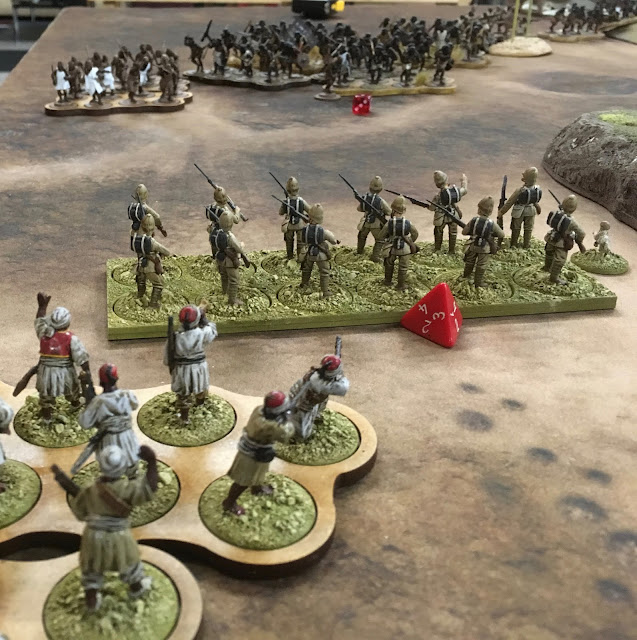 Elsewhere the 2/66th decided to move up and with the 3/66th opened fire on the flank of the Beja, causing a number of casualties... 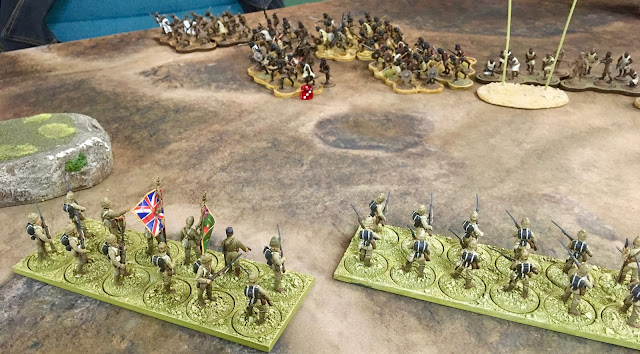 Once again the pesky Mahdist Irregular Riflemen caused me problems! Two units needing sixes to hit killed five of the 3/66th, pinning them. The Bengal Lancers then began to launch a flanking move to strike the enemy from behind. 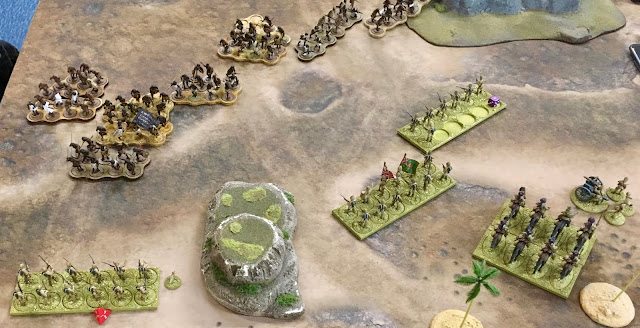 The 3/66th rallied next turn but the a unit of Beja Tribal Infantry charged them killing five more, forcing them back and pinning them again. 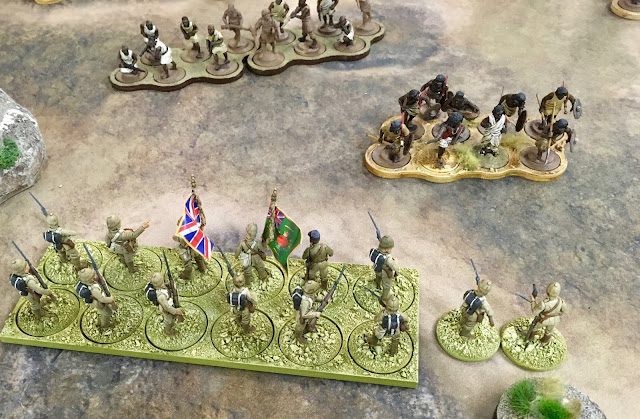 However this left the Beja exposed to the machine gun which had been painfully dragged into the centre of the table and between it and the 2/66th, the Tribal Infantry unit was destroyed.


Meanwhile the 1/66th were standing firm in Close Order, unleashing volleys at the enemy as they attempted to charge them. 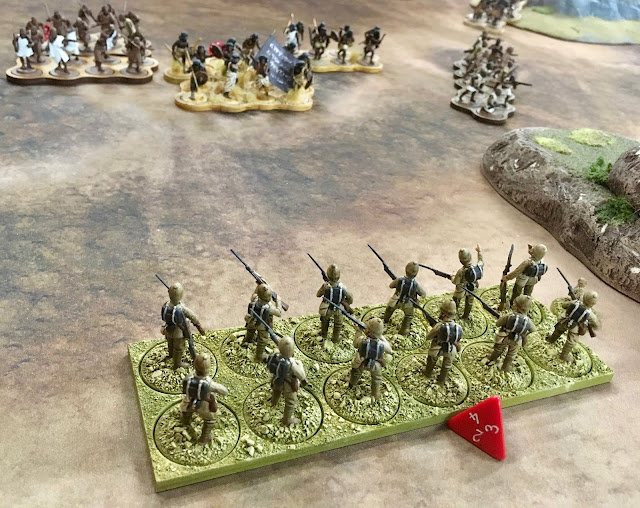 The Gods of Dice did not favour George tonight, he failed a lot of order rolls and lost another Beja unit with a rally test scoring 2 or less. His Irregular Rifles continued to be a pest, killing five of the 2/66th but failing to pin them. The Bazingers then decided to rejoin the fray, climbing up the steep hill in the middle of the battlefield. 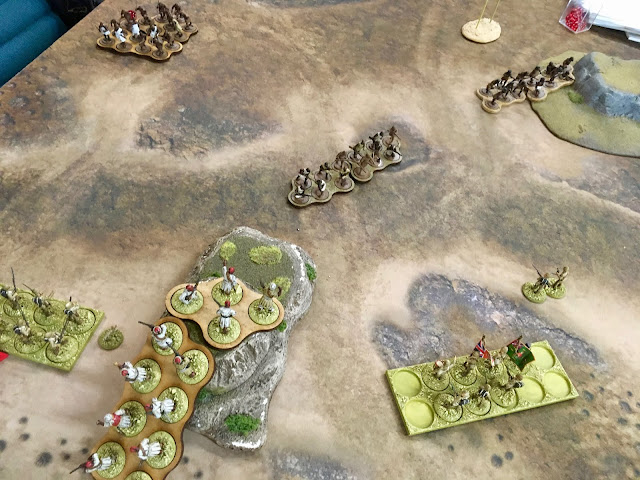 Their fire, combined with that from the 2/66th inflicted a number of casualties on the Madhist Rifles, pinning them. The next turn they rolled 2 on their rally test and routed. Elsewhere the machine-gun started inflicting casualties on the other rifle unit, pinning them, but not before they had killed two of the Bengal Lancers as they foolishly rode within range of the Mahdist rifles.

On the left flank the 1/66th continued to fire volleys at the enemy, pinning them and then advancing before launching another round of withering fire wiping them out. 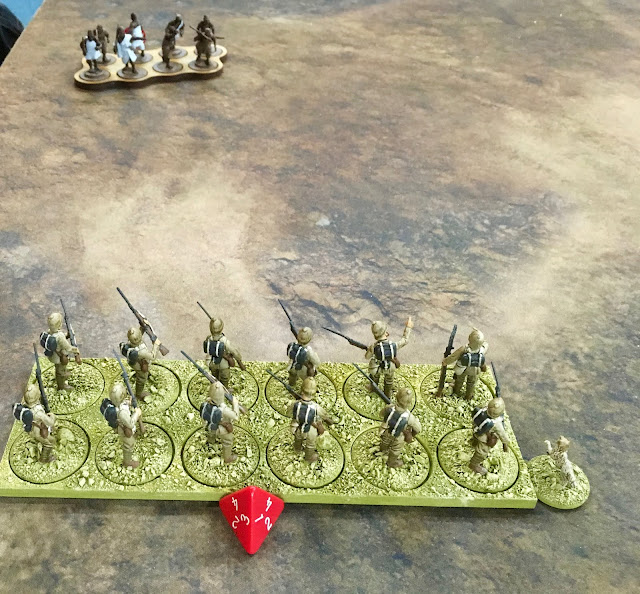 Finally the Bengal Lancers charged in on the two remaining Mahdist Riflemen, killing them and securing an important victory in the desert of the Sudan for Her Majesty! 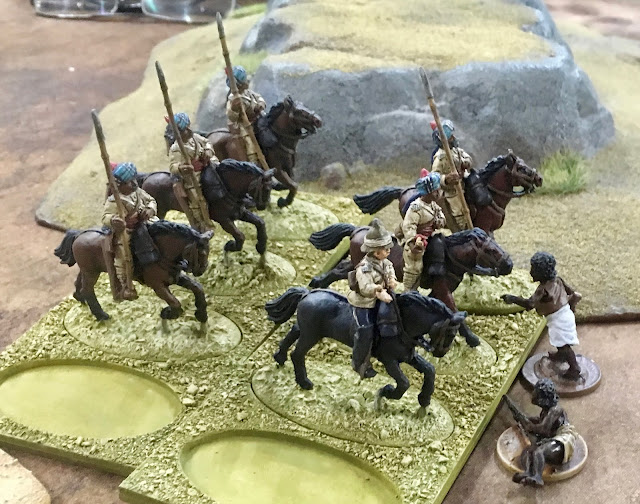 Another fun game and one that was probably more difficult for the defender, especially if they were a Tribal force (it would be interesting to play this with the Imperial force attempting to retreat across the table).

George was desperately unlucky with his dice rolling tonight, units refusing to move At The Double at crucial times preventing him getting into melee and three units failing Rally tests so badly they routed. My Bazingers benefitted with their leader having the Destined For Greatness trait, without it I could not have had them fire and fall back, which they managed to do three out of four times. The bad leadership traits I rolled up for the Leaders of the Regulars and the machine-gun (Cad, Short Sighted, Inexperienced and Brutal), did not really come into play so I wasn't majorly disadvantaged by them this week.

No game next week as my son Saul is playing his first gig with his band at The Thunderbolt so I will be there, but we should be back in the Sudan in a fortnight by when I hope to have painted up some Highlanders (and maybe some tough bearded types in turbans...).
Posted by Steve at 00:39:00