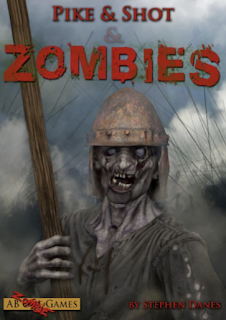 A couple of unconnected incidents over the last few days appear to be leading me down the path of unintended consequences into playing a new game.

First off, in a continuing attempt to rescue the games room (the rather frightening plastic mountain is now boxed for transfer to the attic) I discovered a box of GW Zombies. I have no idea why I bought them as my only flirtation with WHFB Undead is a small unpainted Tomb Kings army, but I have 20 plastic zombies with no army to attach them to.

I didn't give this much thought until Hallowe'en when Wargame Vault had pumpkin logo trick or treat feature on their website whereby you tried to find ten pumkins on their webpages and by clicking would receive a trick (usually a link to something amusing on YouTube) or a treat (a free PDF product). I discovered three treats, one of which was Plague City, a supplement for Pike & Shot & Zombies, a C17th post-apocalyptic zombie game. Browsing through Plague City I was quite taken with the concept and the small numbers of miniatures needed, about half a dozen survivors and two to three times as many zombies and so availed myself of both the main ruleset and Rotting Renaissance Regiments, a supplement introducing zombies derived from military units (a really good excuse to chop up some Warlord ECW figures and add Mantic zombie bits!).

It make be a little while before I sit down to stick my zombies together and whilst I have a few old Foundry ECW somewhere they are probably out of scale with the zombies and I would need to get a handful of Warlord or TAG, this is likely to prove a fun diversion from some of the larger projects I seem to have planned...
Posted by Steve at 23:15:00