The campaign to rescue the wargames room has been halted as SWMBO insisted on a mini-campaign to tidy up the study with one of the areas of spousal concern being some boxes of magazines buried under the desk! By and large this was my collection of Military Modelling magazine from 1978 to sometime at the end of the eighties but scattered amongst the Military Modelling's, Classic Rock magazines and copies of SFX were a number of wargames magazines, many short lived and now defunct. 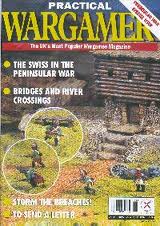 These range from recent efforts such as Caliver's Battlefields from the mid-nineties, through Practical Wargamer and Wargames World to 1970's old school journals such as Battle for Wargamers, Wargamer's Newsletter and Miniature Warfare and Model Soldiers, as well as some largely unheralded efforts like the mid-eighties Esprit De Corps.

There have been comments from SWMBO about "culling" which are sending shivers down my spine (I think she means the magazines not me!). I think I have made the "right noises" about reviewing and scanning articles but I am hoping the recent investment in a few plastic storage boxes plus the sacrifice of some old SFX and role-playing magazines that I have no interest in should see the threat recede for the time being...

On a related magazine note some good news on the Battlegames front in that it has been rescued any will continue to be published by the same company that produces Miniature Wargames.
Posted by Steve at 14:05:00