The Dungeons Are Calling 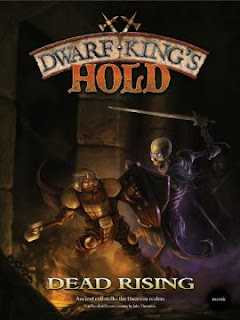 One of my purchases at Salute was a copy of Mantic's Dwarf King's Hold: Dead Rising as a game we could take on holiday etc, or just break out for a quick battle. Official RRP is £34.99 but we picked it up for £30 from Wayland Games on the day.

We did play a quick game on the Mantic stand using the 3 up model game that they were running and I was impressed by the way the chit-based movement allowed the game to ebb and flow with advantage appearing and disappearing quickly. Having now had a chance to read the rules I am even more impressed this is a really very clever little game with a number of subtleties belied by its very simple game mechanics.

I was also very impressed with the quality of the components. You get 22 skeletons, 7 dwarves (groan) plus loads of odds and sods on the sprues, some beautiful card floor tiles, counters and several dice. If you didn't need to stick the miniatures together you'd be ready to go.

I must confess that I didn't like either the look of either the skeletons or dwarves when released but able to physically hold and study the sprues I have revised my opinion. The skeletons are excellent and I can't recall seeing a sprue so crammed full of spare bits. The dwarves still don't quite do it for me, but they are better than the photos on the internet. 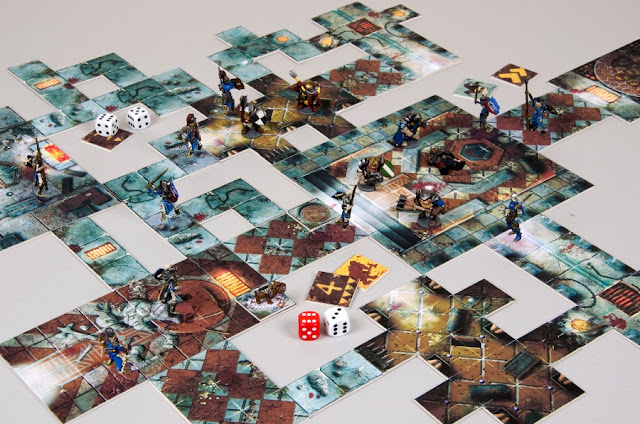 Overall I must say this is an excellent game, lots of potential for expansion and a great one to play with either the kids or regular gaming buddies with a couple of beers on hand.
Posted by Steve at 10:13:00