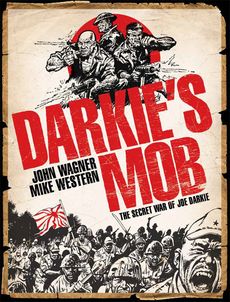 Titan seem to eventually getting their act together with their reissues of old Battle comic book stories and the postman delivered a hardback compendium of Darkie's Mob, a story set in Burma about British troops caught behind enemy lines during the Japanese invasion, rescued by the mysterious Captain Darkie who leads them on a series of missions against the Japanese.

Unlike many war comic stories of the mid-seventies, this is no Captain Hurricane style adventure swatting the Japs with an uprooted palm tree, it is violent to a near visceral level, grisly and unrelenting and at times racist (though as Garth Ennis states in his introduction, this was a total war where the both sides demonsied the enemy and in that context it would be inappropriate for the British troops to act as though it was a tea party). It is a powerful story with an interesting mystery at its centre and if this was 15 or 18 certificate film we'd all love it! :-)

I must confess I don't recall it being as violent when I read it as a wide-eyed eleven year old but I do recall fighting Darkie's Mob battles with Airfix Aussies and Japs in my bedroom. One thing that did attract me to the story in the first place was Mike Western's artwork and I do hope Titan reprint his work on The Sarge and HMS Nightshade as he is a most under appreciated artist and deserves recognition.

Overall I've not read much better in the way of fiction, or seen any films set in the Far East campaign that compare to this and recommend it with the provisio that if you are letting your eleven year old read it make sure you discuss the context of some of the language with them before they re-enact an ambush at school yelling "take that you slant-eyed son of Satan!" 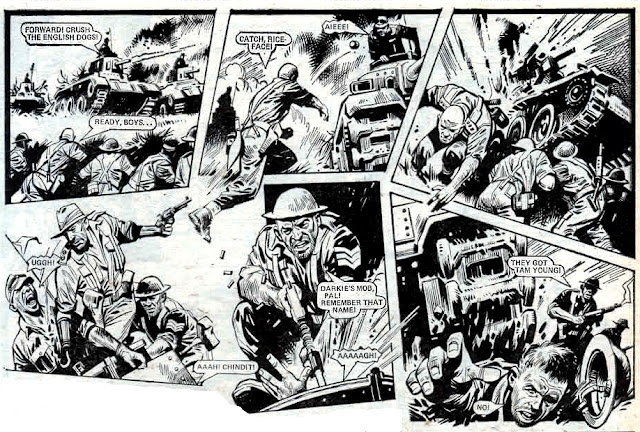