Before the November lockdown I did manage to get a couple of games in down BIG as we were (then) Tier One, I have just been a tad tardy on writing up the after action reports for one reason or another... The first of these was our refight of Salamis using Long Face's Ad Mare Bellum. Following a couple of previous games we'd made a couple of tweaks to the game which had worked well including the inclusion of a 'Tiffin' card which randomly ends the turn (what's the Greek for Tiffin?)

On an 8' x 6' table Steve and Bryan commanded the Greeks (deployed at the top in the photo below), whilst George and I command the larger fleet of Persians, Ionians and Egyptians... The numbers of ships was taken from the scenario in Poseidon's Warriors. 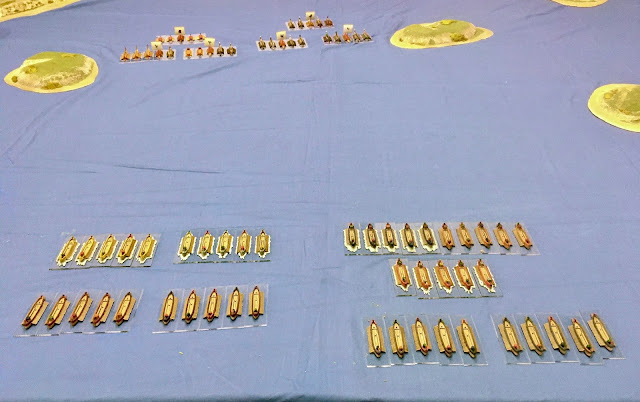 Turn one started with the Greeks drawing two phase dice in a row (the dice bag contained four a side plus the end turn dice), but decided to remain in position using the two small islands to protect their flanks. The third dice was Persian so mine and George's fleets started rowing towards the pesky Greeks. 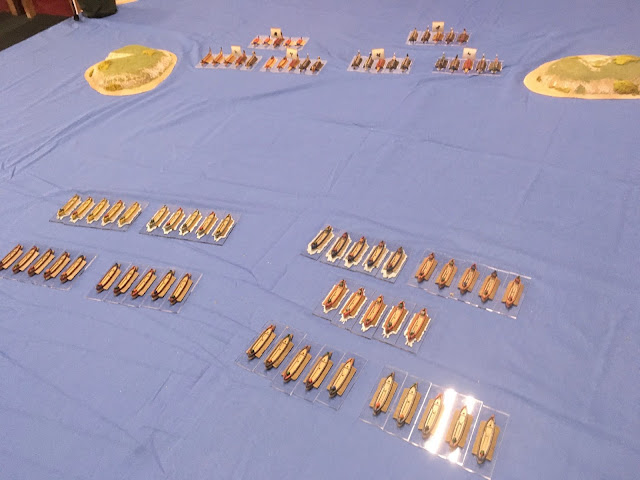 The next dice was Greek and Bryan decide to push one of his triremes forward... 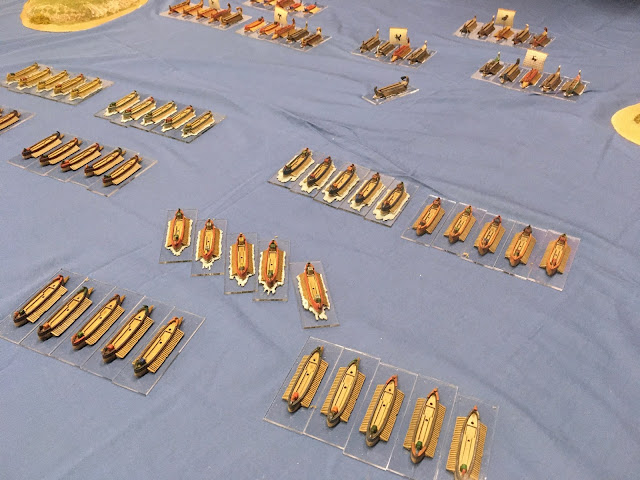 The next phase was Persian so one of my Egyptians decided to ram the Greek galley in the flank. Unfortunately, despite such a prime target, the Egyptians only damaged the Greek vessel not sink it. 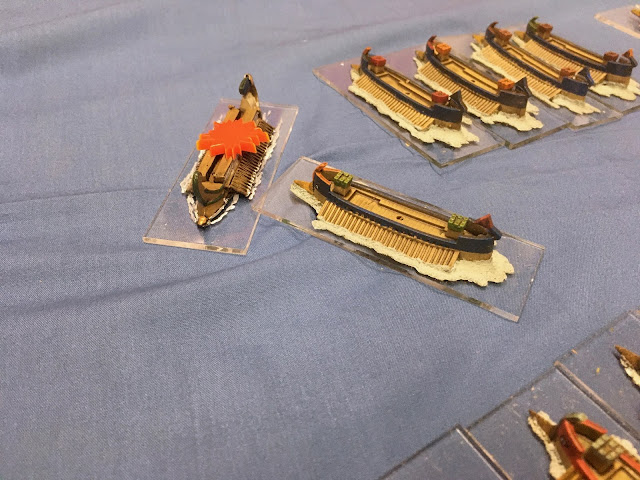 The Greeks took the opportunity to retaliate inflicting a Crew casualty on the Egyptian vessel. 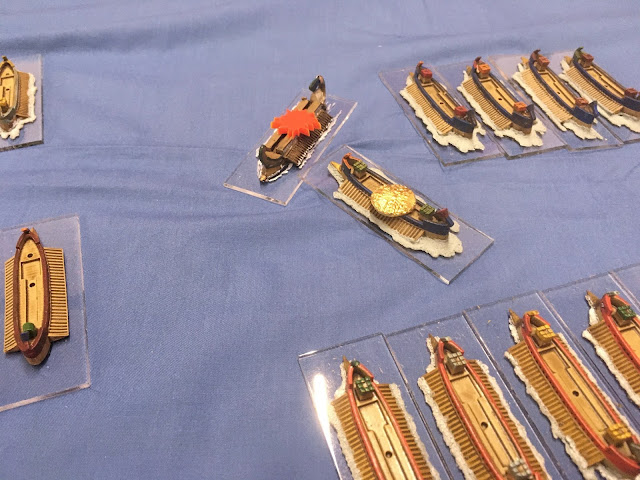 George's loyal Ionians took the opportunity to lock horns with the Steve's Greeks and board their vessels. 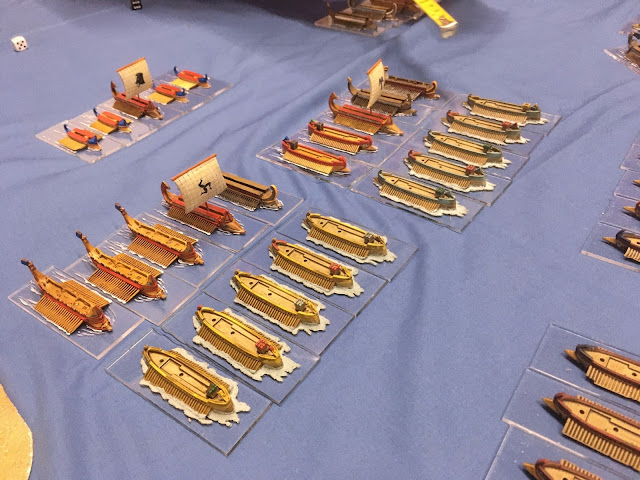 Unfortunately as they rowed forward they took a number of Crew casualties (shown by the coins) and one vessel was boarded by the Greeks and captured (the white dice signified a captured ship). 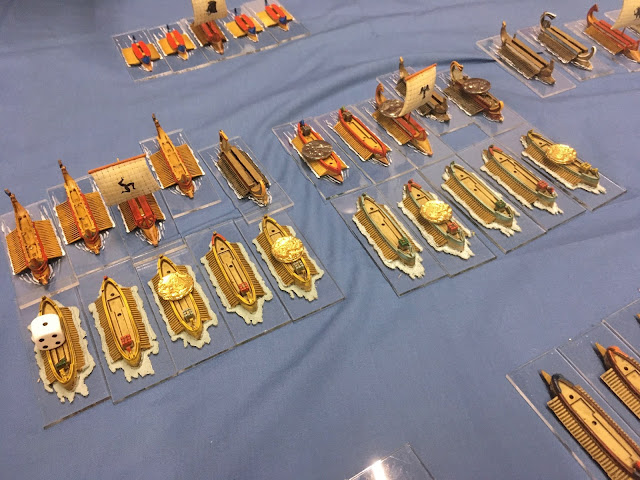 One the other flank Bryan captured one of my ships but was swarmed by my reserve squadron. 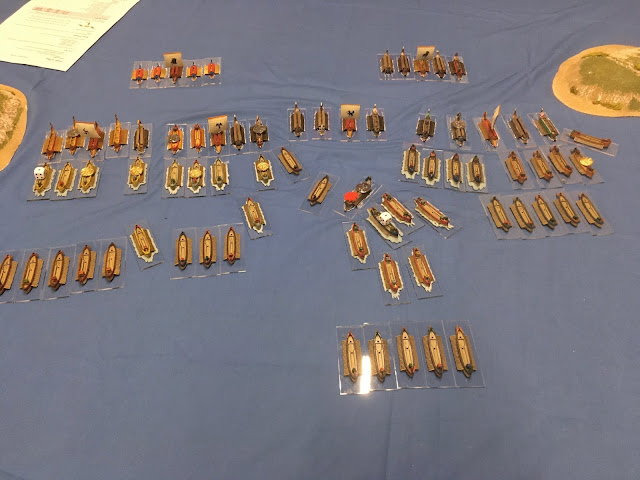 The next phase was Persian again and I recaptured the lost ship and boarded and captured three of Bryan's. 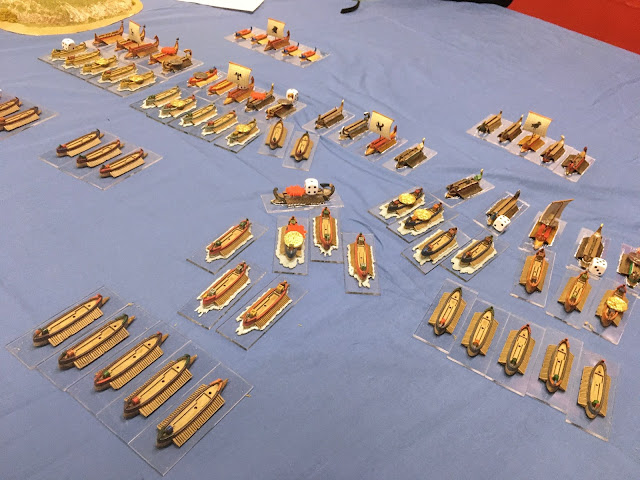 The fight between Steve and George was turning into a rugby scrum with ships being captured... 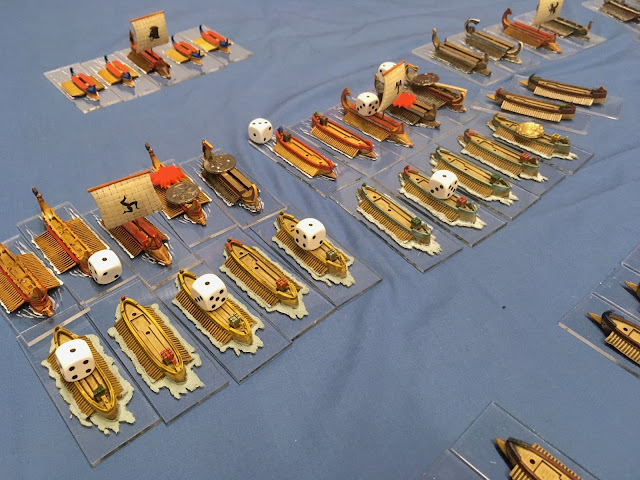 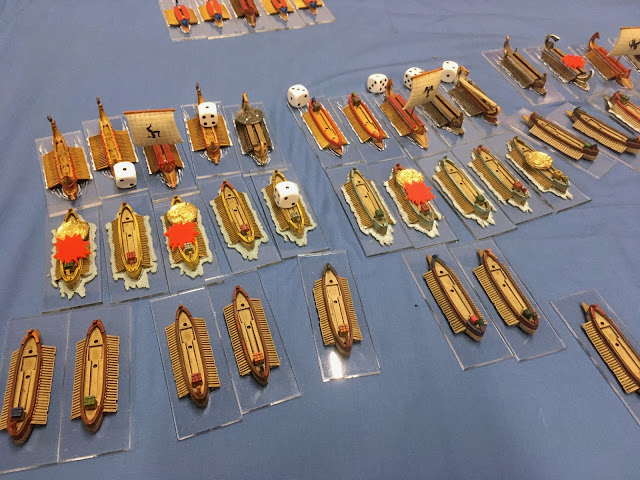 The next dice pulled was Persian again (the third phase in a row) and I used thus to pull the captured enemy ships out of the way and attempt to punch a hole in Bryan's line. 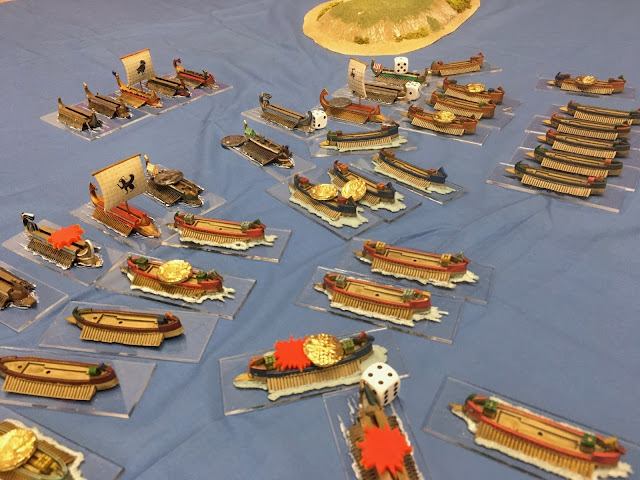 The next dice was the turn end one, so all the dice went back in the bag.
The first one pulled out for turn two was... Persian! (I blamed this on Steve's negative vibes not being seen favourably by the Gods of Dice).
George pushed his reserve forces forward and used them to board and recapture lost ships and capture two of Steve's defensive line. 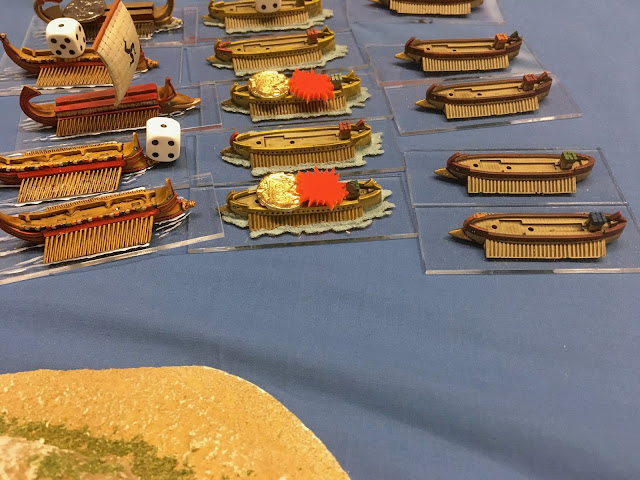 On the other flank Bryan's line was disintegrating as more his ships fell under Persian control, one squadron was now completely captured... 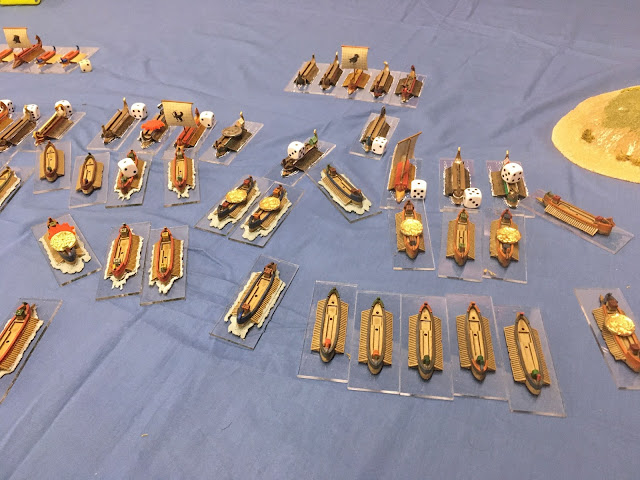 The aim now was to row the captured Greek galleys out of the way and push through the gap into the reserve Greek squadron and the flank of Steve's galleys... 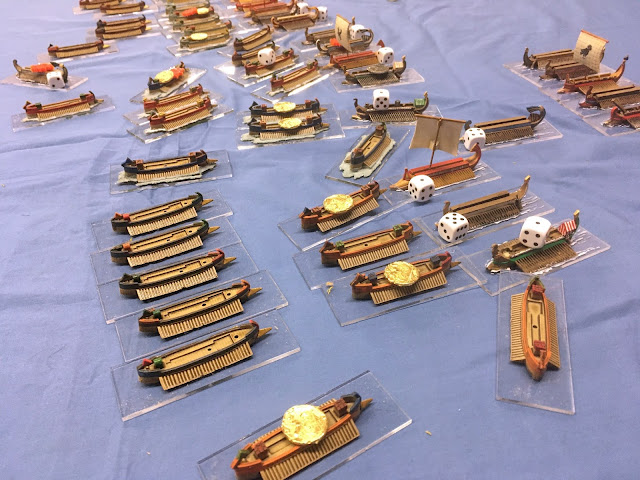 The Fates looked poorly on the Greeks again as the next phase dice was Persian (the sixth in succession - we did check the Greek dice were in there!)
My Egyptians pushed through the gap in Bryan's line and looked to bear down on his remaining squadron. 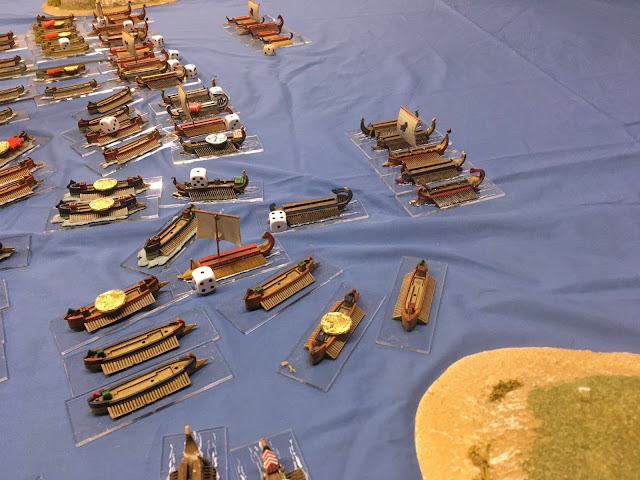 Meanwhile George's managed to sink one of Steve's galleys and pull another out the defensive line having captured it. 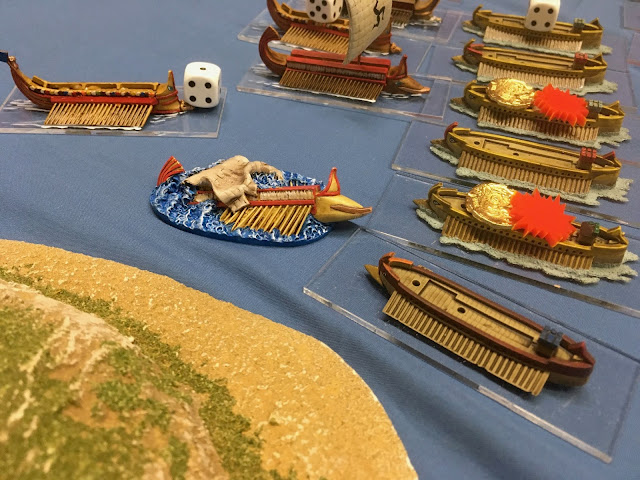 At this stage there was clearly no route to victory for the Greeks and they conceded control of the seas to the mighty Persian Empire! 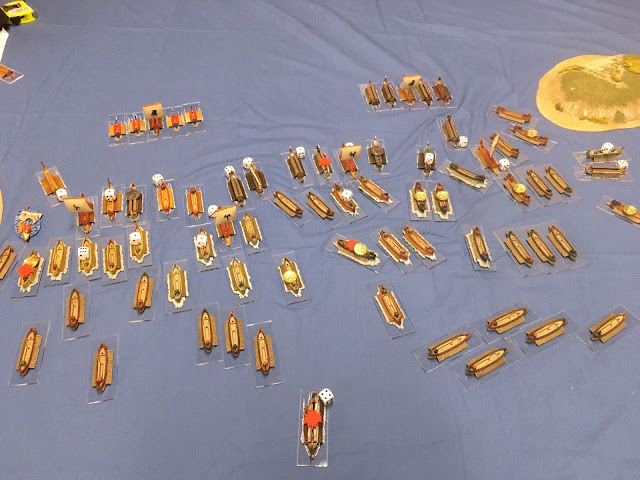 The battle turned out rather one sided, not helped by the Persians drawing six phases in a row allowing them the initiative to attack the static Greeks. The odds of that happening are of course rather unlikely but the Gods of the Dice decided to that was the way things were to play which was a shame as it had not happened like that in the two smaller games George and I had previously played and led to a rather unsatisfactory game for Steve and Bryan...