Following last week's run out of Ad Mare Bellum, George and I decided to have another battle down BIG with a couple of minor tweaks.

Last week in the first turn we had pulled four of the six phase cards and as three of them had been mine George knew he had two phases in a row coming up and was able to position his ships through two moves in a way be would not have if he had not had that certainty. If the possibility existed of my ships having the opportunity to move he would not have exposed his flanks in his first phase move. Speaking with game designer David Manley he suggested we include a turn end card which ended the turn(!) but oif you had not had an Action Phase in the turn you automatically got one before the next turn started. Secondly in one boarding action we had a two ships on one situation with each scrap fought separately, tonight we were going to treat it as one action with the attacker combining their Boarding Factors.

Off the Greek island of Kolokythokeftedes, a Phoenician fleet has appeared and the Greeks have launched their triremes in response (as we did last week we treated the Pheonicians as being from the Manoeuvre school and the Greeks from the Boarding school. 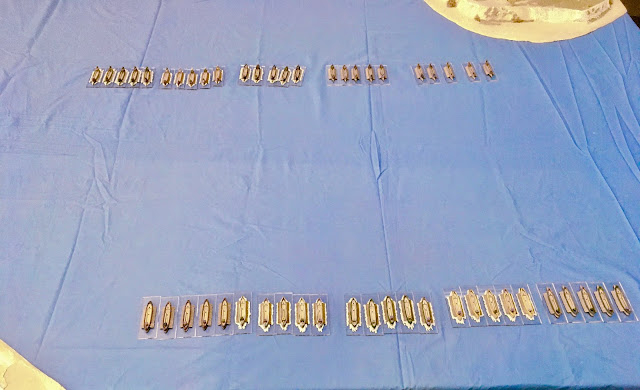 The first card drawn gave George the Action Phase so he moved his fleet forward... The second card was for George, as was the third! :D This allowed the Phoenicians for close with the static Greeks and George make some comments about how lucky (or not)  I was in general! 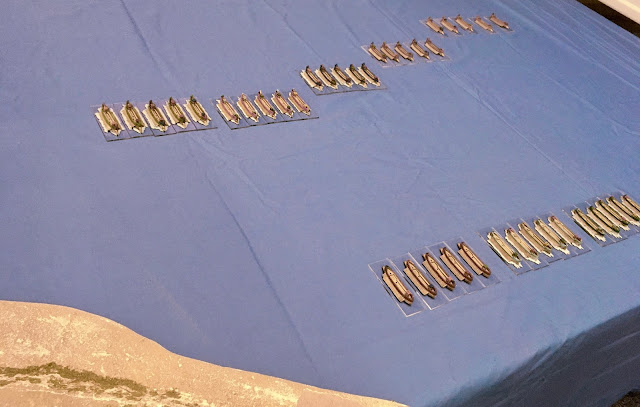 The next card was the Turn End one so not having had an Action Phase I was allowed one and moved the right flank of my fleet forward. At this point George decided we would be better served drawing dice to determine whose Action Phase it was given my card shuffling skills(!) so he went and bought a dice bag from the BIG shop! :D 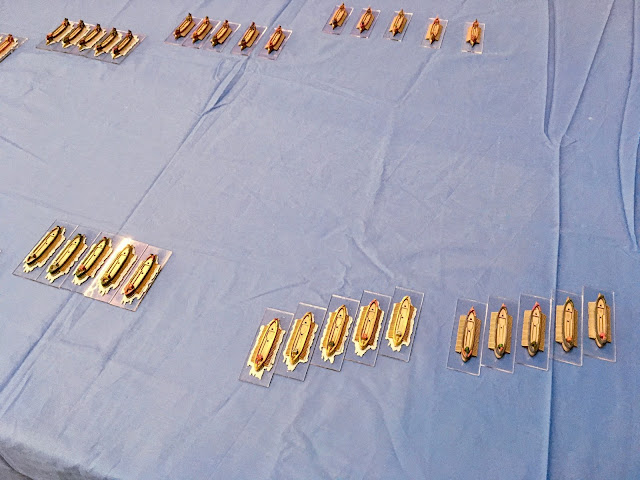 The dice bag did not make a huge amount of difference as George pulled out dice giving him the next two Action Phases, pinning the left of my fleet to the shoreline (the table edge)... 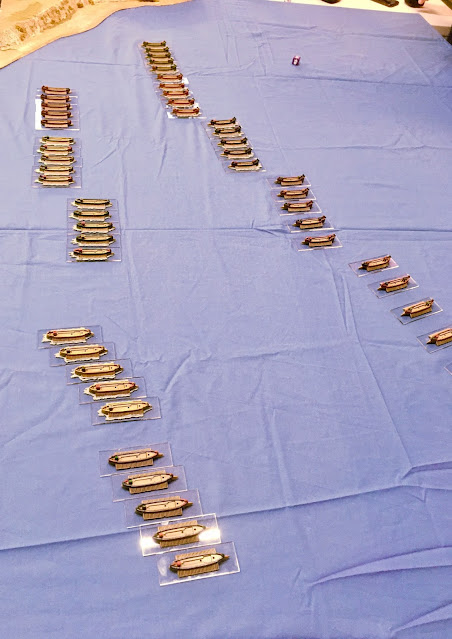 And putting him in position to smash into my flank! 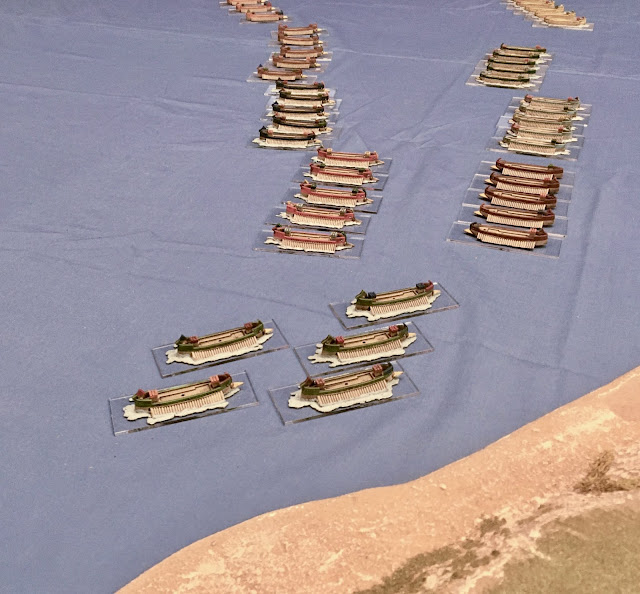 A first flurry of archery saw one of the Greek triremes suffer a Crew Casualty (we used the coins again to show vessels who had suffered a Crew Casualty). 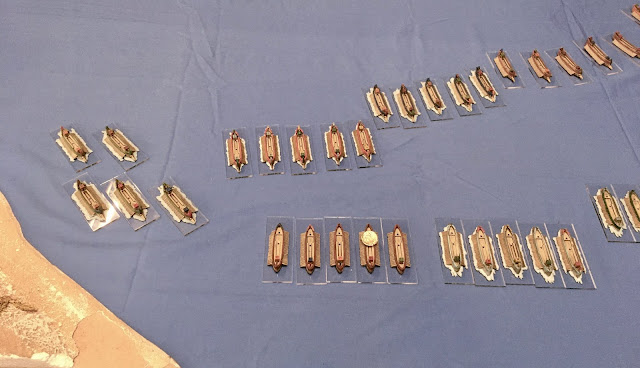 Fortunately one of my dice was pulled next so it was my Action Phase. I attempted to pull back my left flank in some form of kyklos defensive formation... (not a very good one as it was to turn out)... 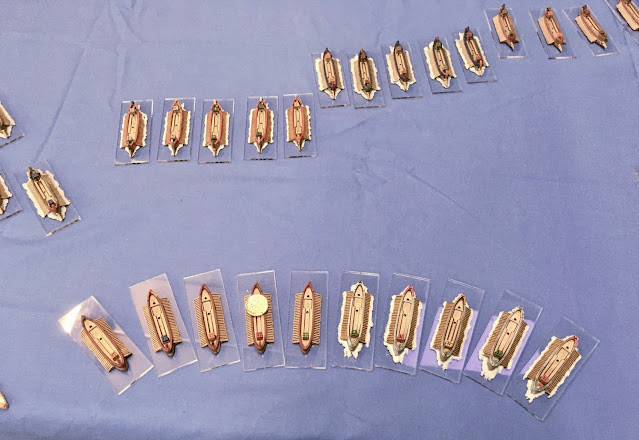 And pushed the Greek right flank forward in an attempt to overwhelm the Phoenician left and expose their right. 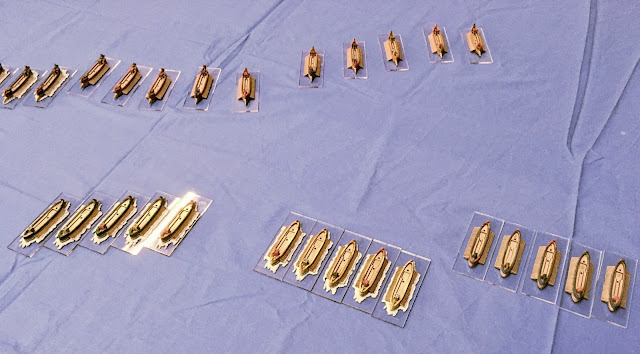 My defensive formation was not as well positioned as I tried to make it and the Phoenicians managed to ram one of the Greek galleys in the flank... 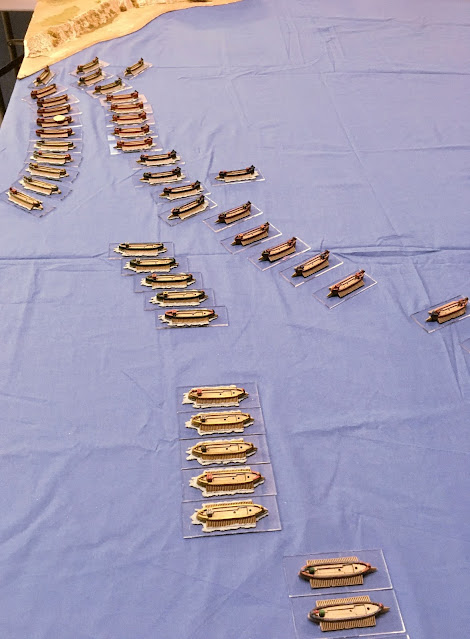 Completely wrecking it! (I bought a bag of craft matchsticks on the way to the game to use for Damaged and Wrecked ships). 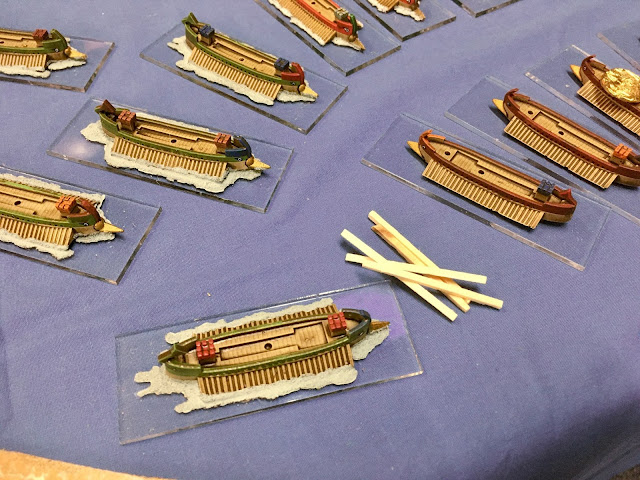 The next Action Phase fell to the Greeks and being of the Boarding school, they launched a number of boarding attempts capturing two of the Phoenician raiders! (we used white dice to show captured ships). 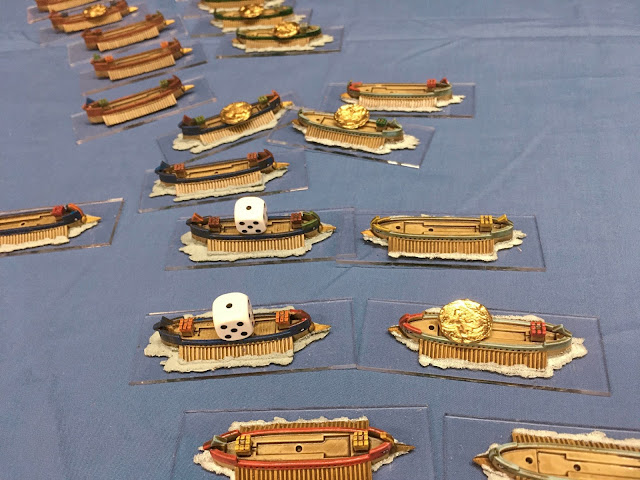 On the Greek right a Phoenician trireme was Immobilised by a Greek ramming attack (signified by a Lardies shock marker). 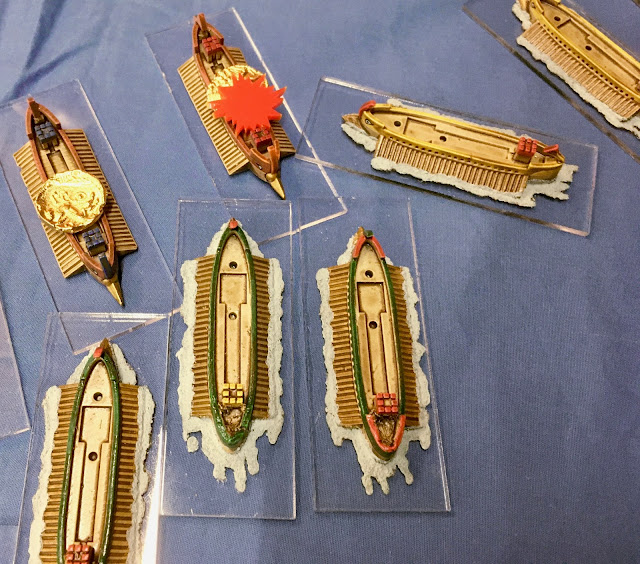 The next Action Phase fell for the Greeks again and after softening up the enemy with bow fire, the Greek left launched boarding attacks on the Phoenicians capturing four more enemy triremes in just one phase following some excellent dice rolls! 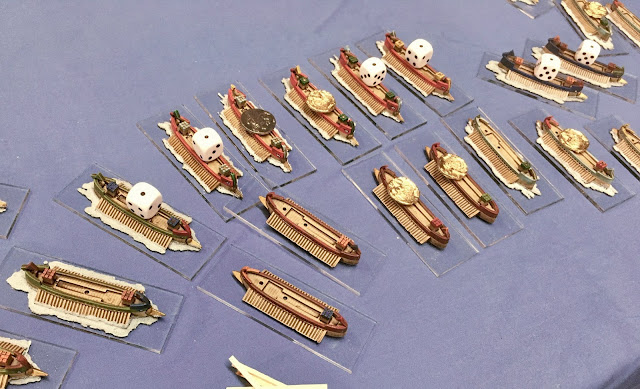 With the Greek's trying to sail their captured prizes to safety, the Phoenicians decided to meet sword with sword and launched some boarding attempts of their own... 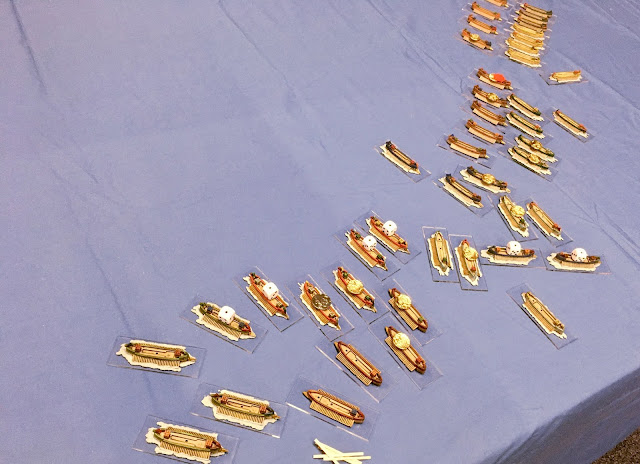 In a flurry of boarding actions the Phoenicians took a Greek galley, but lost another of their own. 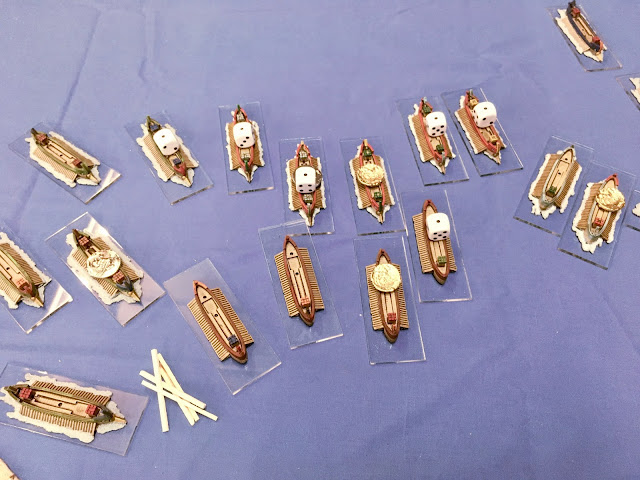 On the Greek right flank the Phoenicians found themselves ganged up on losing two more triremes to enemy boarders as well as a galley in the centre. At this point the Phoenician admiral conceded the battle. 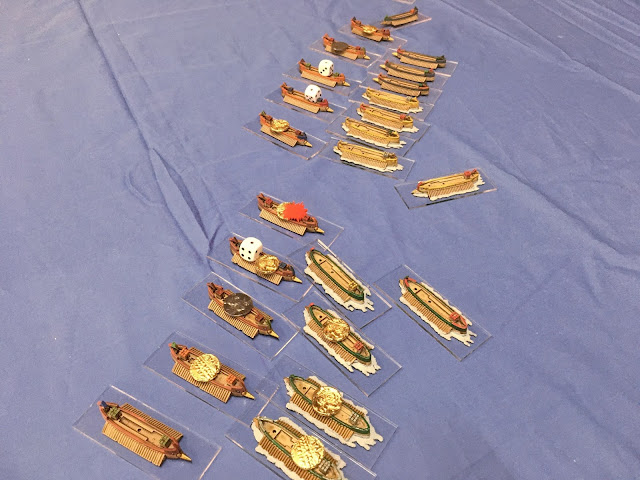 Having captured 11 enemy triremes and immobilised another for the loss of just one sunk and one captured this was a pretty decisive victory for the Greeks.

Whilst George had joked about my luck early on as he had three Action Phases in a row (and five in total to my one initially), it did mean that my fleet was forced into a defensive position and George unable to use the advantages of Manoeuvre to any effect with the Phoenicians falling victim to the superior Greek Boarders. As he could not gain the advantage of turning the Greek flank George felt he should have been more decisive in Ramming the Greek triremes head on, despite the risks. Standing still handed the Greeks the initiative allowing them to board and capture the static vessels.

Our experiment in combining the Boarding Factors proved too powerful as the best the defenders could hope for was a drawn combat (and only a 1 in 10 chance of achieving that). We decided part way through to amend this to so that an Attacker could only add half the Boarding Factor of any supporting ship in a multiple combat. This worked much better and did allow the Phoenicians to capture one ship with some fortunate dice rolling.

We concluded the missile fire was too powerful for the actions we were fighting, with a 50% chance of a target suffering a Crew Casualty. The impact of that meant that in a subsequent Boarding Action the impacted vessel's own Boarding Factor is reduced by half (from 4 to 2) severely limiting their chances of not seeing their trireme captured and it became my tactic of choice in this battle. For our next game we are only going to allow a Crew Casualty to be caused by bow fire on a roll of 6.

Our minor tweaks are not a criticism of the rules which we really like, but they do cover a 3000 year period and we are making some small modifications to tailor them for the first twenty years on from 400 BC.