The Men Who Would Be Kings: Till the Watchful Bugles Play...

A belated report from the Sudan and another The Men Who Would Be Kings battle fought against George and his Mahdists down at BIG on Wednesday. We decided to try the first scenario we played in August, 'It's Awfully Quiet Out There...', now we had a better grasp of the rules.

As we both have bigger Field Forces we increased the scenario points values from 24 Native and 18 Imperial to 36 and 27, this allowed me to pick three units of British Regulars, one of Fierce Sikhs and  one of Unenthusiastic Bazingers. We also decided to use the terrain rules from Saga as TMWWBK is somewhat vague on this score and George placed a couple of hills on the table that broke line of sight. Wanting clear fields of fire I decided not to place any terrain.

The scenario required me to deploy my Field Force out in column in the centre of the board first before George deploys his natives... 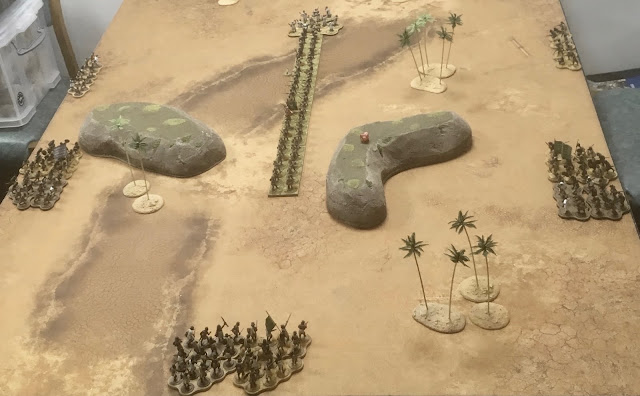 The Mahdists then had the first move and used the cover provided by the hills to get close in... 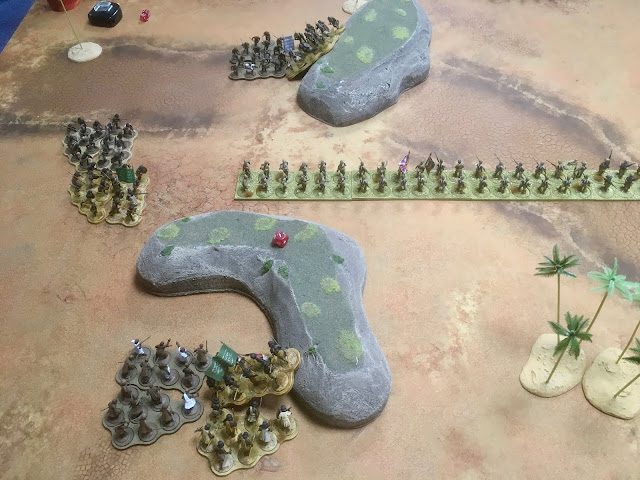 I decided my best course of action was to get my troops into the open desert, form Close Order and try and blow the Fierce Tribesmen with the sharp pointy sticks away before they got too close. My Bazingers would engage one of the two Irregular Infantry units George had deployed along the flanks.

No plan survives contact with the enemy, this plan didn't survive not getting contacted by the enemy! 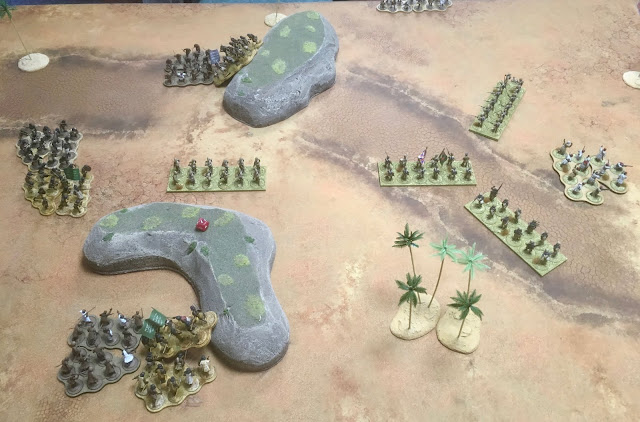 Whilst three units moved, the Regular Infantry nearest the enemy refused to budge, as did the Bazingers meaning the Regulars on the far side exposed to the Mahdist rifles resulting with them being Pinned next turn.

The Beja then charged into the Regulars who had refused to move killing 3/4 of them in a frenzy of stabby sticks and then Pinning them. 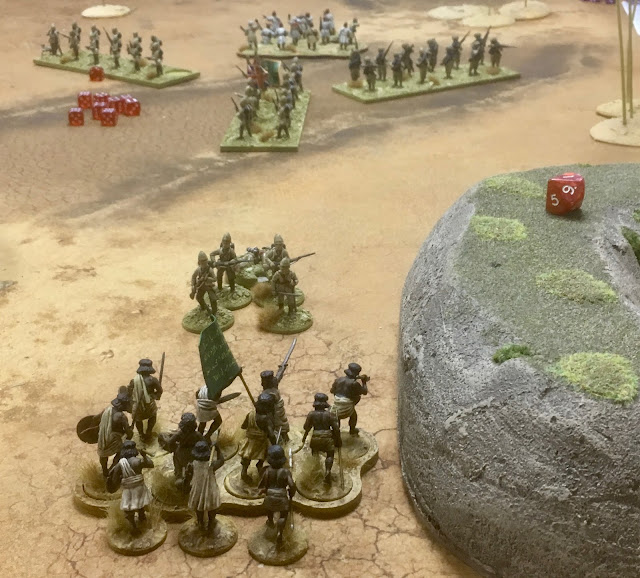 Next turn they finished the Regulars off and the Irregular Rifles started picking off Sikhs and other Regulars. The Sikhs did manage to form Close Order and avoid being Pinned. The Unenthusiastic Bazingers decided to get involved and engaged the Rifles but did not manage to Pin them. 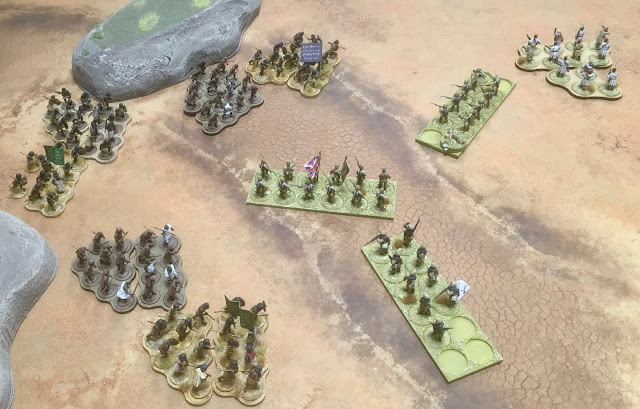 The Beja on the far side began to close in and whilst I managed to unpin the Regulars, the close proximity of the sharp stabby sticks meant I was faced with a choice of Firing or trying to form Close Order (which would have restricted the arc of fire for the unit in the middle).

The Regulars opened fire killing a number of Beja and pinning one unit who were just an inch from charging into contact... 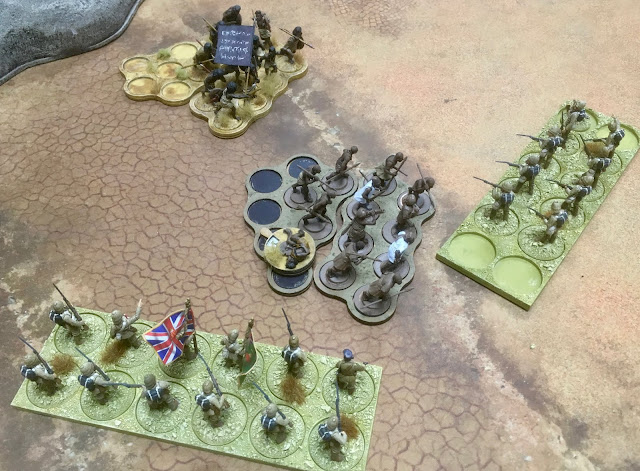 On the nearside the Beja charged the Close Order Sikhs. In a brutal round of hand to hand combat the Sikhs almost wiped out the Beja but suffered several casualties themselves reducing them below the number required for Close Order. Something of a Phyrric victory given the number of casualties and the proximity of the surviving Sikhs to the remaining Beja.... 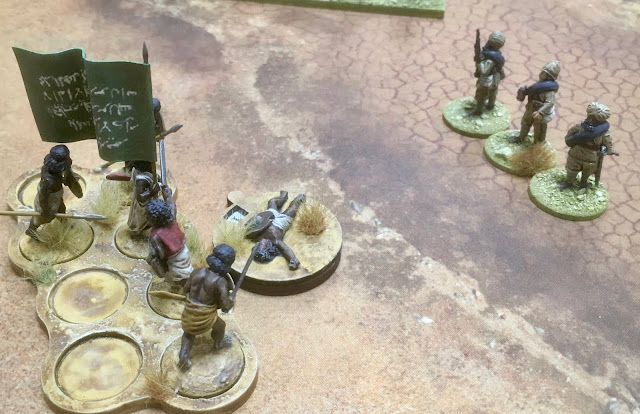 George decided to give them a stay of execution charging his other Beja into the two remaining Regular units, wiping one out and inflicting a number of casualties on the other. 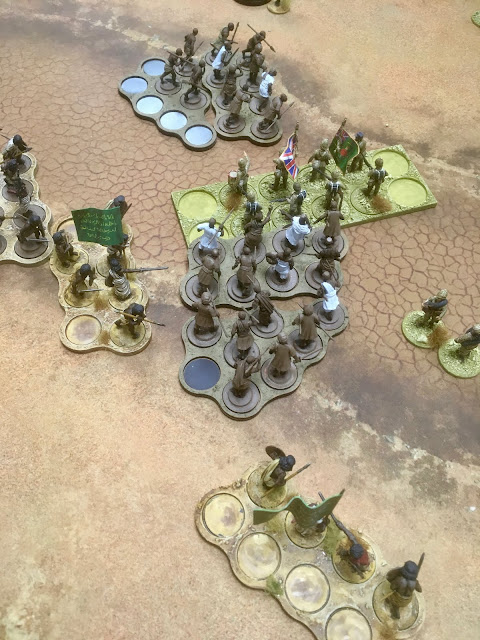 He then polished off the Sikhs before the Bazingers had their moment of glory almost wiping out one of the Beja units with their rifle fire... 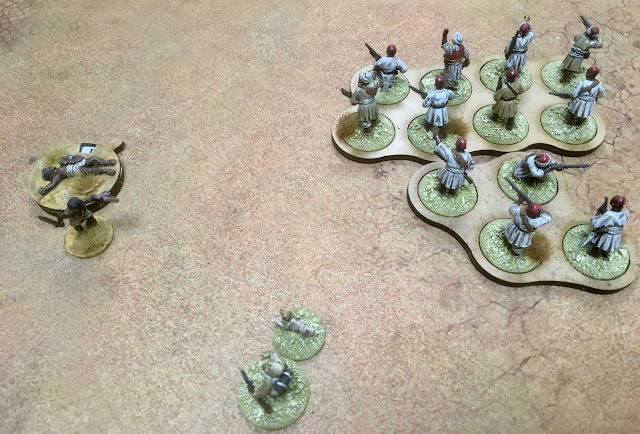 ...but their position was not good with the remaining Beja advancing on them and the sole surviving British soldier. 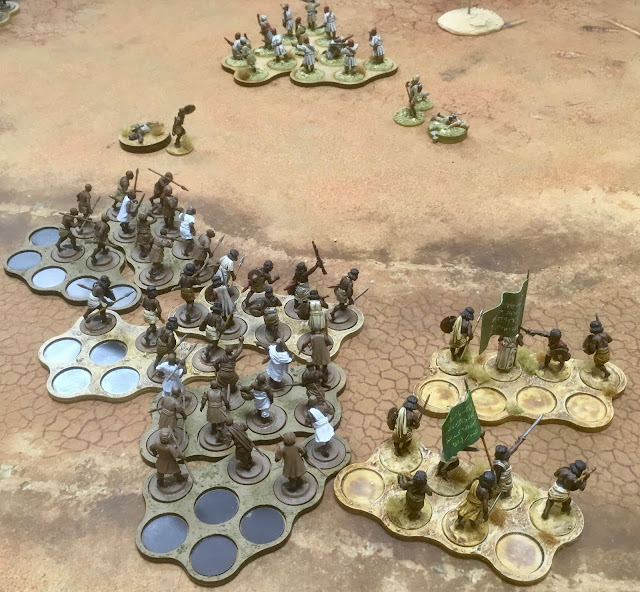 The Beja charged the Bazingers killing 2/3 and Pinning the survivors... 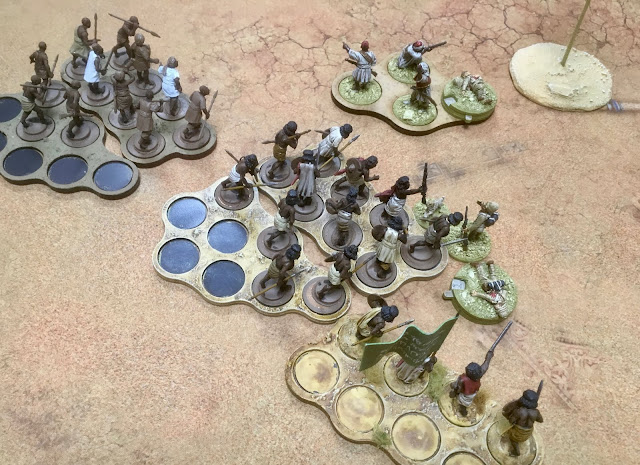 ...before finishing off the last British soldier. 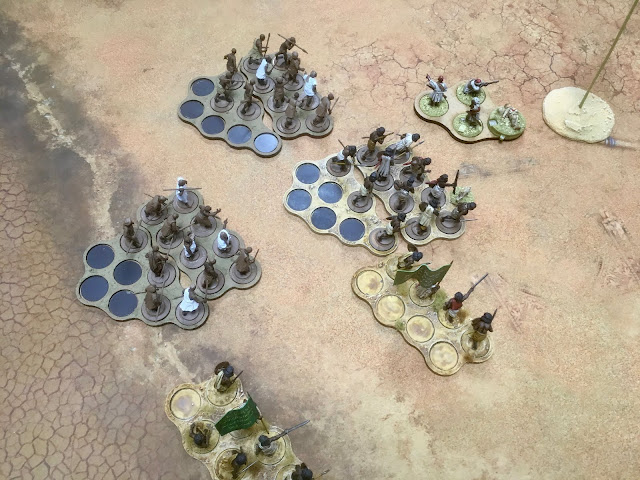 Another charge saw the Bazinger leader end as the sole remaining soldier from the Imperial Field Force before the Mahdists took him out with a final flurry of stabby pointy sticks. 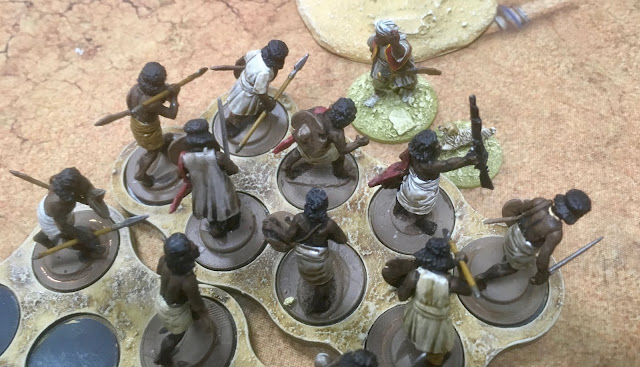 All in all a pretty disastrous evening with little, if any, plus points. The scenario is pretty unforgiving and the failure of a number of units to obey Orders or survive Pinning tests made the situation pretty dire from the beginning. That said as a classic Ambush game it was pretty much spot on with the Imperials being surprised and unable to react effectively.

We do need to sort out the terrain issue. The rules are deliberately vague but given the importance to both sides we need to come up with some solution as terrain, or the lack of it, can offer major advantages to either side (like the hills blocking firing lines in this game). Whilst I suggested it I don't think the Saga terrain generation rules are necessarily the answer and George has dug out a copy of Principles of War that has rules we can look at using next time.