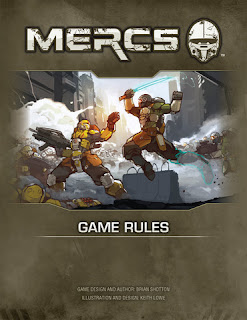 Colours 2011 was a bit of a wake up call for me, where the recent trend in wargames rules production of full colour hard back books was brought into stark relief with the contents of my wallet! Over the years we all have been very critical of Games Workshop's pricing policies* but now it seems the everyone and his dog has jumped on the bandwagon and new sets of wargames rules now routinely cost between £20 and £30, sometimes more when you start to factor in additional materials such as card decks, special dice etc, and that's before you get to the miniatures.

MERCS was the one that caused the sharp intake of breath at the weekend. A reasonable little game, nothing extraordinary but £30 for the full colour hardback rulebook, £6 per faction game deck and £7 per miniature, All in all over £100 for a five miniature a side skirmish game... 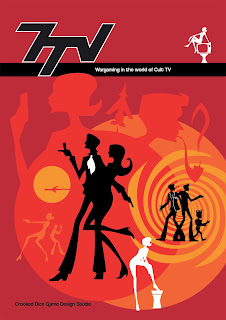 7TV caught my eye but £25 for a full colour hardback rulebook before miniatures and (given the nature of the game) dedicated scenery put me off. Yes, I know Crooked Dice give DWMG away free but did 7TV need to be a full colour hardback at £25 when it could have been a (WAB style) colour soft cover with colour insert for £10 to £12?

Then there is SAGA which sounds just perfect for what I want to do Dark Ages wise but again £25 full colour rulebook and then £12 per set of special dice (because who wants to put stickers on D6's?). Ok I already have some Vikings, Saxons and a pile of Normans in the lead mountain but I'm looking at almost £50 for the rules and dice for two factions and I'll be frank unless there is a good offer on somewhere (come on North Star) I'll probably hold off for a bit... 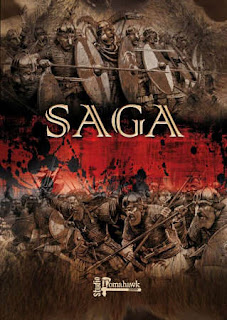 In "ye olden days" I bought rules sets like they were going out of fashion, often to raid for ideas. I don't know how many sets I bought of A5 one colour card cover sets from Tabletop Games but whilst many didn't get played they contained ideas that could be used in home made sets or added to others (Pony Wars was a favourite, the Indian activation system worked well for Orcs in games of WHFB second edition...). But the low cost rules producer is now appears to be a thing of the past which to my mind is a shame as we lose sight of the fact that the product isn't the physical paper but the ideas inside...

The question is the what is the need for the superlative production values, are we all now being seduced by the "ooh shiny" syndrome? Taking MERCS for example, the product description on the website tells you (very) little about the rules but regarding the production values (and I quote): "Spot UV varnishing on a hard gloss lamination cover, 176 four color pages on 157 gsm matte art paper, Case bound, Smyth sewn, Over 100 artist illustrations and 221 full color photos!" Hold on are we losing perspective here? Ok, we don't necessarily want to return to the days of badly typed, photocopied old school rules of the 1980's but "157 gsm matte art paper" and "Spot UV varnishing" (whatever that is)?

The other question is padding. Take Bull Run To Gettysburg, the rules are only 38 pages of the 160 full colour pages and some of those 38 pages are 3/4 illustration and this is not unusual (if the game of MERCS we played was representative I'd guess you could get those rules on two sides - ok, there are probably 'advanced' rules, but the core system is nearly a bag of a fag packet job). 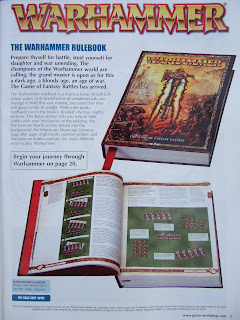 Yes you can argue that in the grand scheme of things £25 is not too much compared to going for a Chinese takeaway or the cinema and certainly the enjoyment of you play a number of games is more lasting, but I'm leaning towards the view that I'd happily buy three or four nicely produced sets at £10 to £15 that I may or may not play very often than gamble on one at £30 that costs that much more just because it looks pretty. And really if you want something to leave on the coffee table in the living room to impress visitors surely you'd pick some pretentious volume on modern art than a book about toy soldiers? :-)

* GW are taking the coffee table production to beyond the extreme, the current WHFB hardback is so thick and heavy it is to my mind unusable. I don't know if Saul has opened his copy unlike the well thumbed A5 paperback rulebook that came in the starter set...
Posted by Steve at 18:28:00