Having played a couple of games of Cold War Commander (2nd edition) soon after it was released and -  despite a confusingly written and laid out rulebook - enjoyed the games, other projects kinda got in the way at the tail end of 2022... Anyway new year, a new resolution to play a few more games of it in 2023 as the game is fun and allows for bigger games than Seven Days To The River Rhine and who doesn't want more tanks on the table? So last night Andy and I played a somewhat off the cuff 1973 Arab-Israeli game set on the Golan Heights to try and remember the core rules and try out some things we hadn't last time around (like artillery).

I decided to hold back one T-55 company and deploy them using the Flank Deployment rules, pushing forward the Mechanised Infantry company (who were quite keen) and the other T-55 company (who were less so and only obeyed their first order - units can be issued second, third orders etc but it becomes harder to do so each time.) 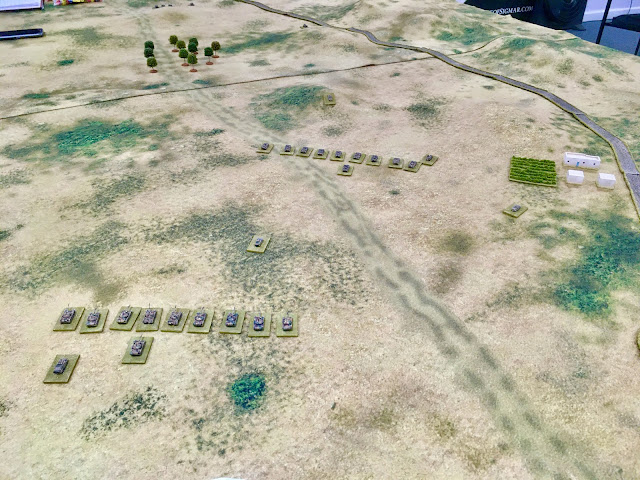 The Israelis were deployed behind the ridge line overlooking the Valley of Tears... 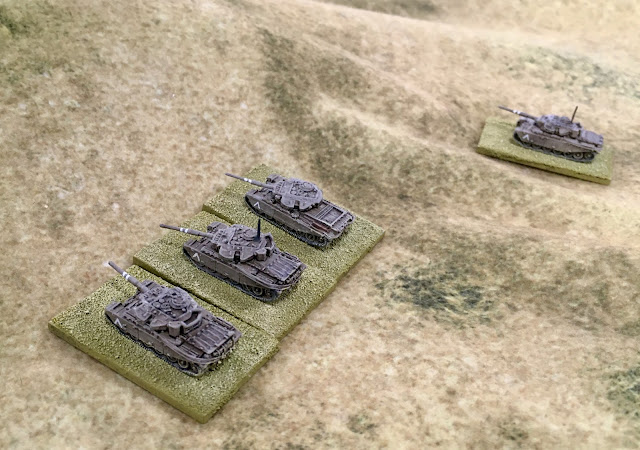 As well as on it. 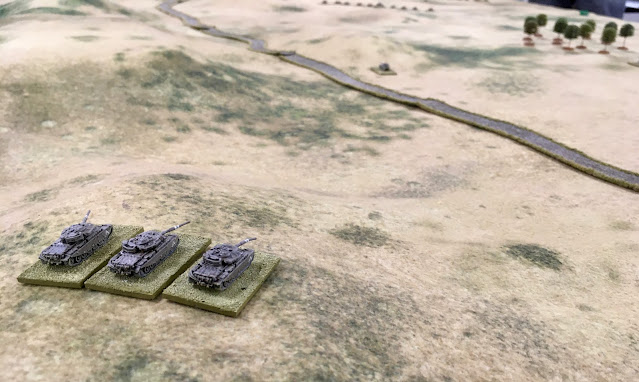 One thing I especially like about Cold War Commander is that recce units have a purpose other than getting blown up. Using the Fast Play Recce optional rules they can nip across the table quite quickly and once near the enemy attempt to spot the enemy and communicate with their own army's command element - if successful this make it easier for that command element to issue orders (reflecting their improved battlefield awareness).
Andy's AMX-13 recce units swiftly pushed forward, one managing to spot the advancing enemy BMP's and radio in to a nearby Centurion Platoon HQ tank... 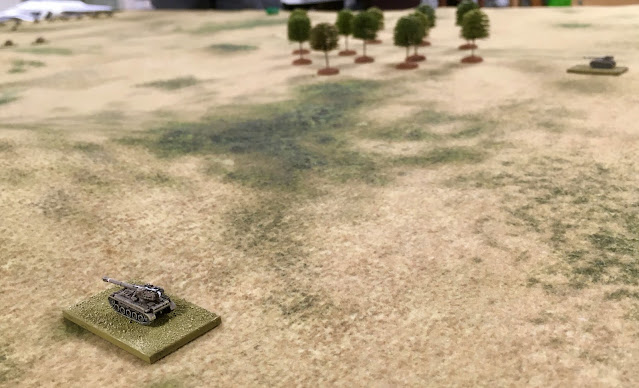 Who ordered his unit to open fire on the advancing Syrian Mechanised Infantry... 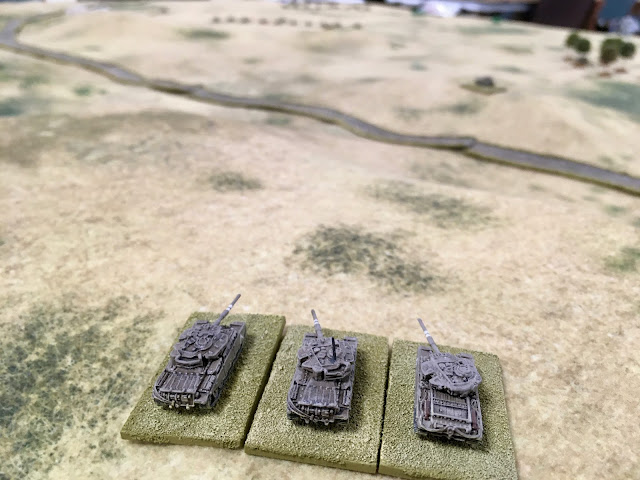 Hitting two of the BMP's but not managing to knock either out - three hits on any one AFV would have managed that but Andy split his fire between BMP's inflicting two hits on one, one on another and none on the third. Andy attempted to issue a follow up order to fire at the BMP's again but failed. 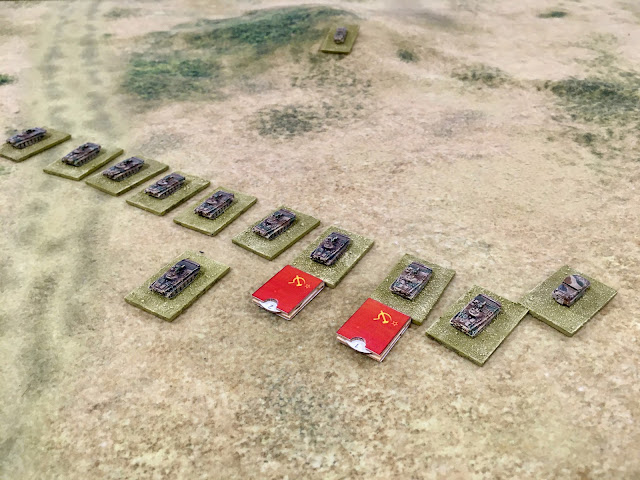 Whilst the main use of Recce units is to spot the enemy and communicate back, they can also shoot in the Initiative Phase and Andy's second AMX decided to have a pop at the advancing Syrian BMP's which I had split into two formations... 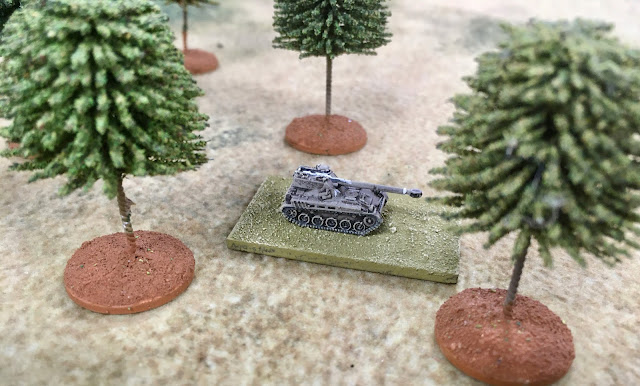 The AMX only inflicted one hit on the lead AFV but also managed to Suppress it (so it would take not action in my subsequent turn). 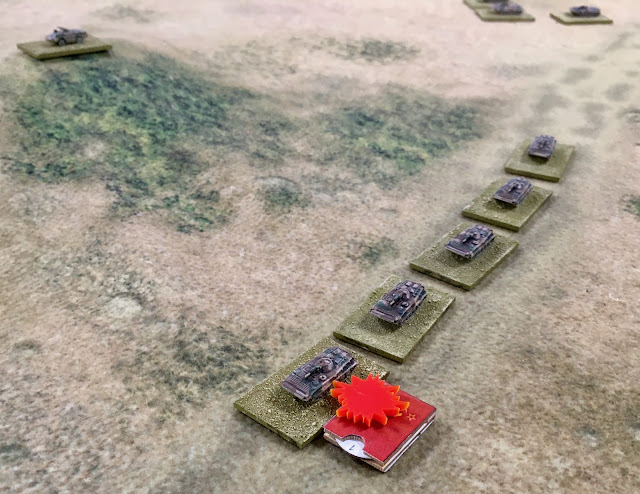 \
An overview of the battlefield at this point showing the T-55's starting to obey orders and advance, whilst the BMP's split into two formations, one pushing into the wooded area, the second flanking around by the farm. 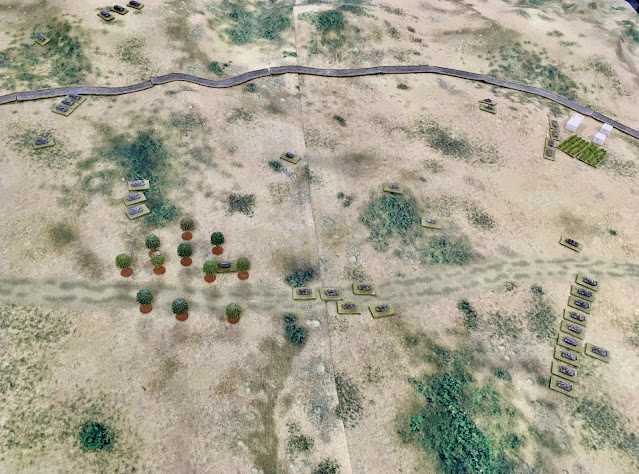 Spotting the BMP's moving towards the wood, Andy's Centurions had a pop at them... 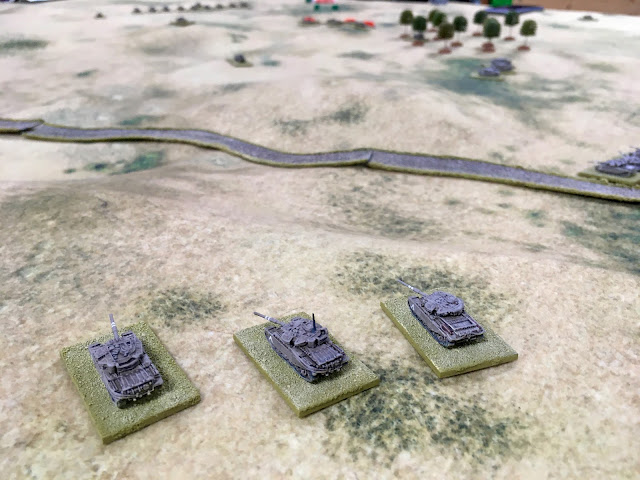 But despite the exposed flanks, they did not manage to knock out any of the BMP's, though three were Suppressed in this round of firing. Unfortunately for Andy the Centurion Platoon did not obey orders for a second round of firing which would have probably gutted the BMP's. 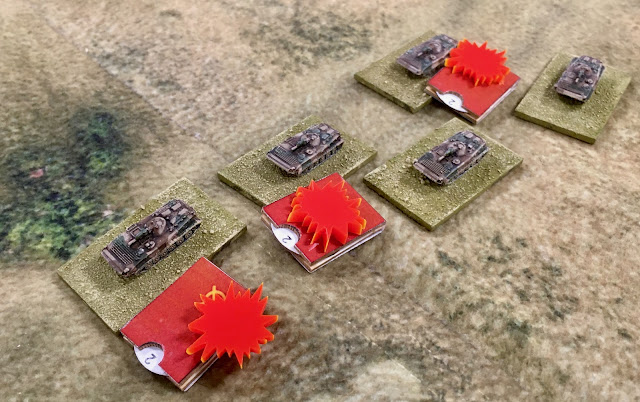 At long last the T-55's pushed forward into range allowing them to target another IDF tank platoon which had been advancing on the Syrian left. 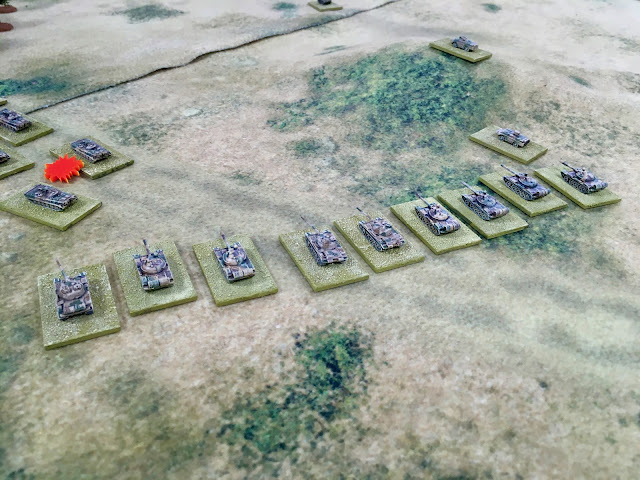 Three Centurions were hit and Suppressed but none knocked out. 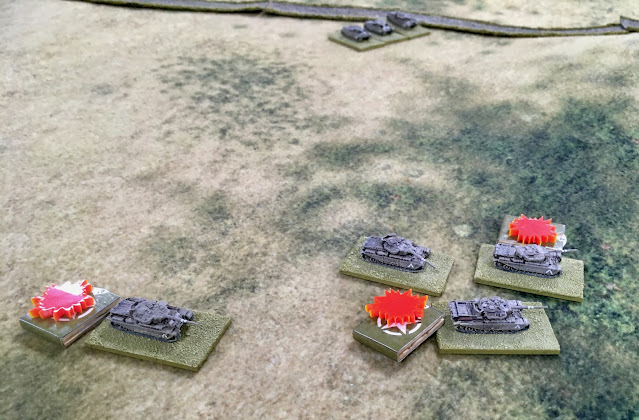 The BMP commander attempted to order his unit to fire their Saggers at the advancing Israelis but not only failed to do so, but rolled a 'Double 6' in the process - a Command Blunder! 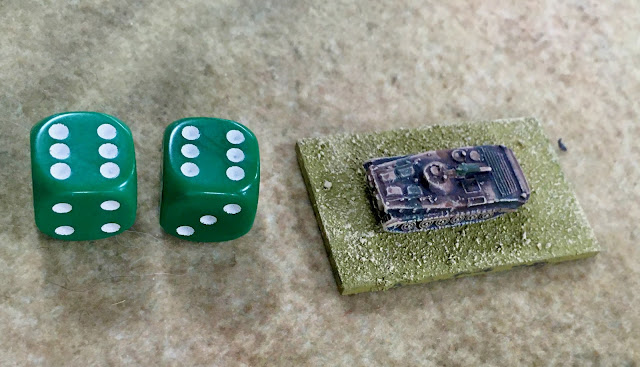 Misinterpreting the orders the BMP's fell back half a move towards their table edge... 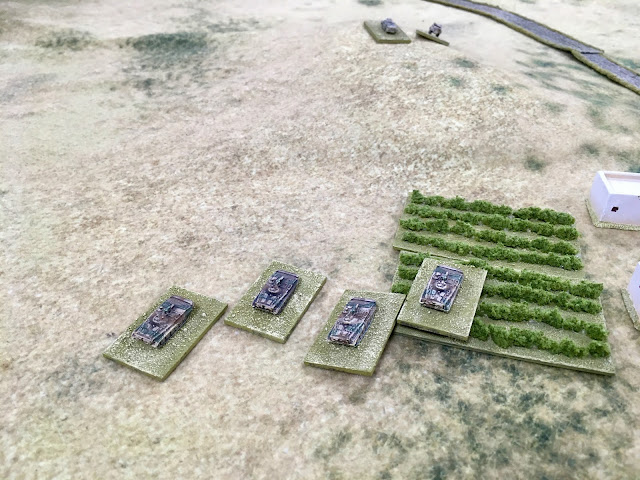 Which was somewhat fortuitous for those on the Syrian left who had been hit in the flank previously. 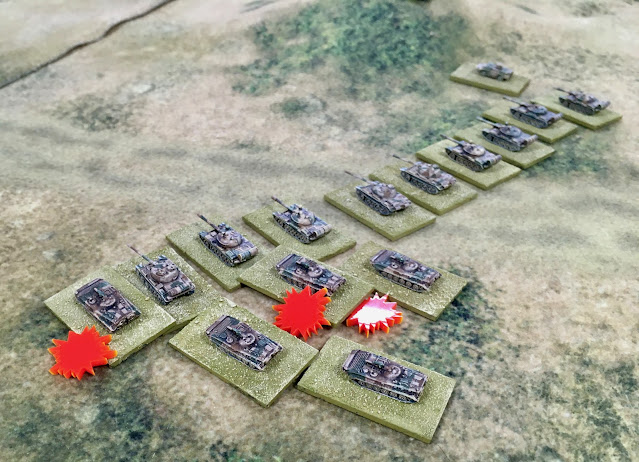 With most of their BMP quarry now hidden by the cover of a small rise, the Centurions on the ridge line switched target... 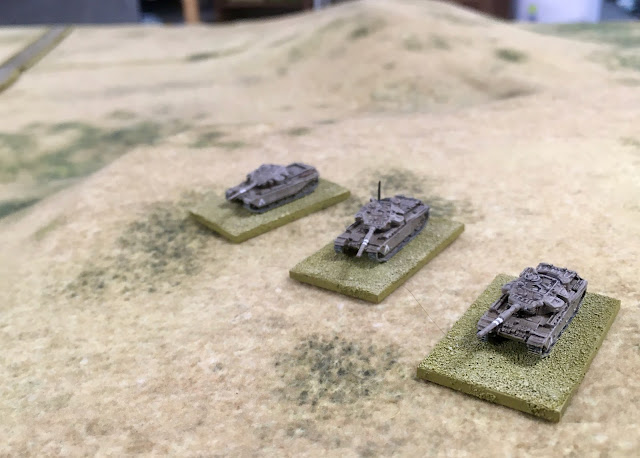 And in two rounds of firing hit five T-55's - destroying one and suppressing another, subsequently forcing it to fall back. 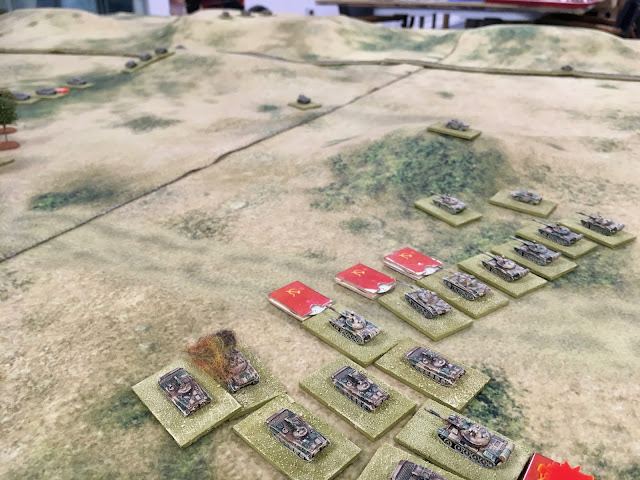 Another Command Blunder, this time by the Syrian CO, saw the T-55's fall back, taking them beyond their range but keeping them within the Israelis! 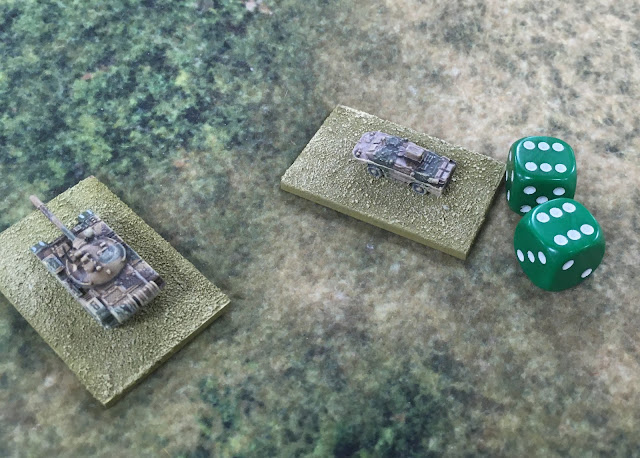 The blunder saw the nearest Syrian unit to the Israelis take 2 D6 of hits resulting in the T-55 blowing up! 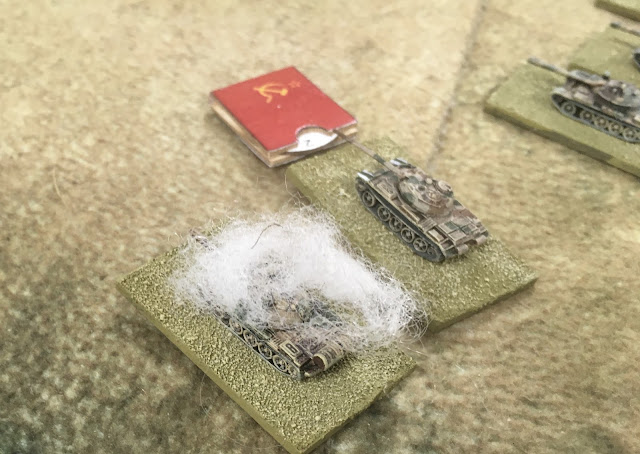 In the Initiative Phase, Andy decided to send his Recce units hunting, targeting the Syrian BRDM's. In the woods the AMX-13 missed when it fired at the Syrian Recce AFV... 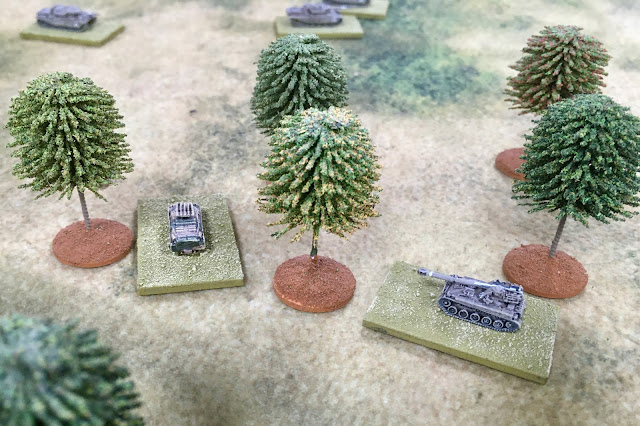 But outside the woods the second AMX-13 brewed up another Syrian BRDM with a well placed shot! 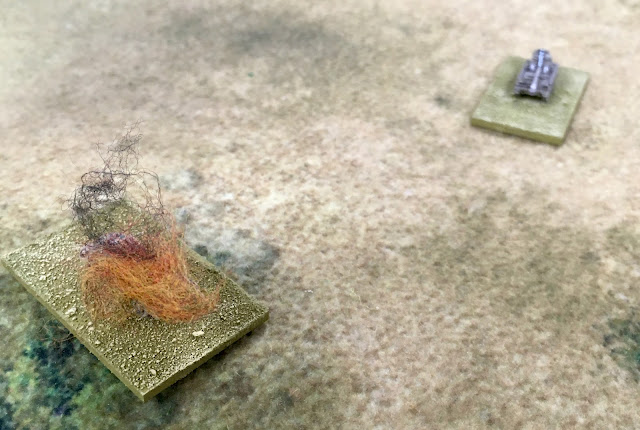 However just when Andy was thinking he had the measure of the Syrian attack, I managed to activate my Flank Deployment, bringing in the second T-55 company behind the Israeli right! 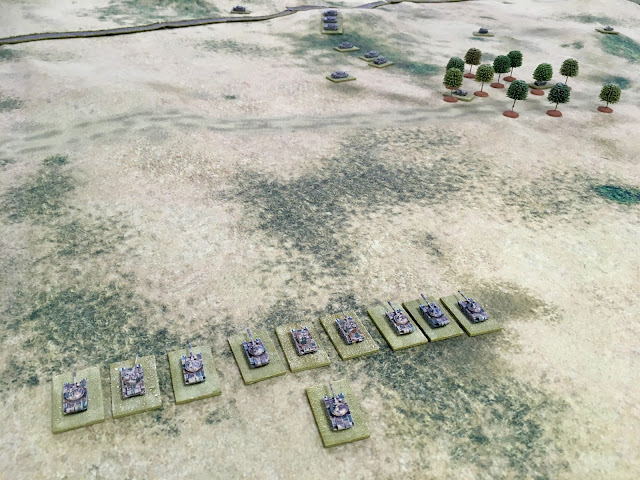 The company was ordered to advance and I rolled a 'Double 1' - a Command Bonus! This allows the unit to take a second action without rolling, so the the T-55's advanced as ordered then they opened fire! 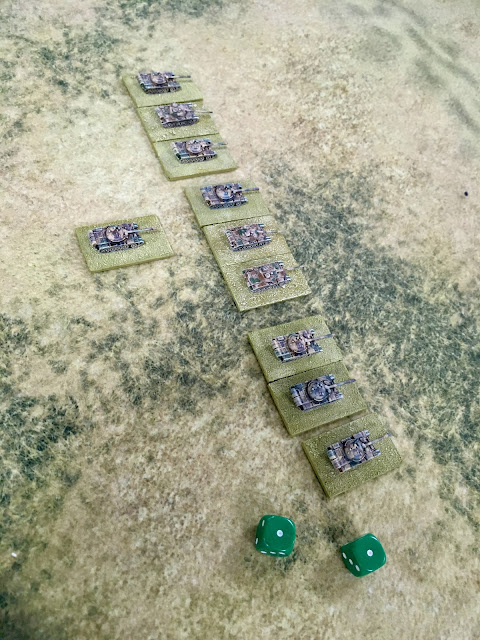 However, before they did, Andy decided to try some reactive Opportunity Fire... 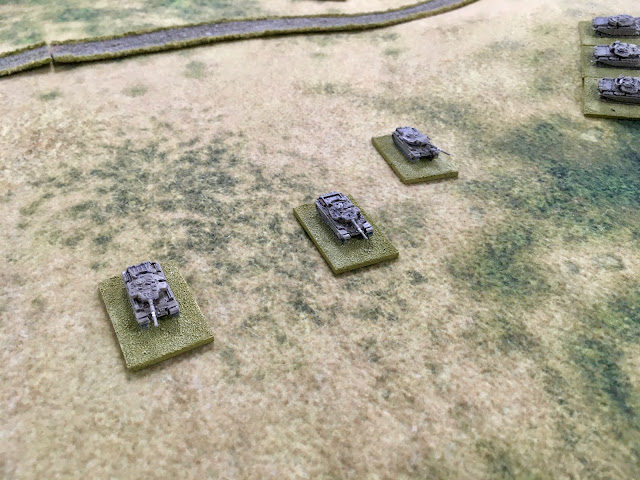 Hitting two T-55's bit not managing to knock out or suppress any of them. 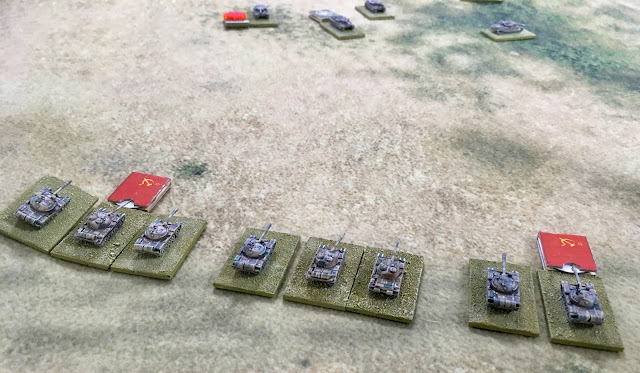 The opportunity fire done, the T-55 rounds slammed into the Israeli Centurion platoon. One took hits but was not suppressed, a second though was Knocked Out. 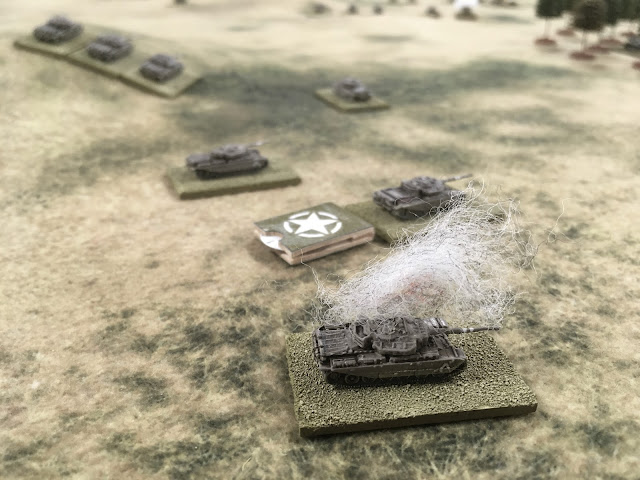 In the same turn the other T-55 company and the Mechanised Infantry company with their Saggers opened fire on the other Israeli tank platoon. Again Andy tried Opportunity Fire but not no effect, unlike the T-55 and Sagger attack which killed two of the Centurions. 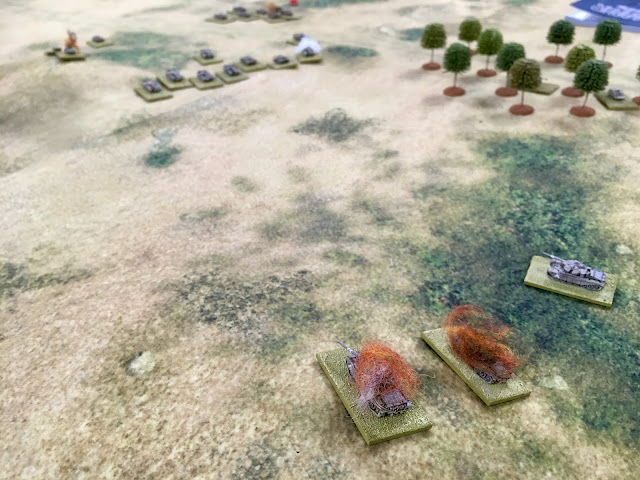 At this point Andy facing a two pronged attack and with one-third of his armour on fire, decided discretion was the better part of valour and ceded the field of battle to the Syrians.
Whilst it took us a little while to get our head around things again after long break (not helped by the rulebook layout!) this proved again an enjoyable game and reminded us that hiding in the rulebook is a good set of rules.
This was our first Arab-Israeli game using Cold War Commander and it was interesting that the Soviet kit is even worse in Arab hands than Russian ones! The maximum range of the Syrian T-55's was only 60cm reflecting the poor gunnery of the Arab tank gunners and the export level of the Soviet kit (a Soviet Cold War equivalent has a range of 70cm) whilst the Centurions had a range of 125cm! Andy made the mistake of closing with the T-55's allowing them to engage the Israeli armour rather than standing off, one I suspect he won't make again...
We tried the Artillery rules with the Syrians having an FAO direct off-table artillery support. We tested both Concentrated and Barrage artillery attacks and whilst not very photogenic(!) the rules seemed to work well enough, with the Syrians managing to suppress a couple of tanks on occasion.
Certainly Cold War Commander appears a set of rules to persevere with - and play a little more regularly to keep our hand in. Next up we'll have to give the infantry rules a try.
Posted by Steve at 12:34:00