A few weeks back George threw out the idea that we should look at Osprey's Black Ops as a game that a number of us could all play at once and that we'd heard good things about. This reminded me that hiding in 'Lead Mountain' was a pile of figures from an old Empress Miniatures Kickstarter so having quickly scanned the rulebook I decided (for something a bit different) to paint a Chinese People's Liberation Army squad up. 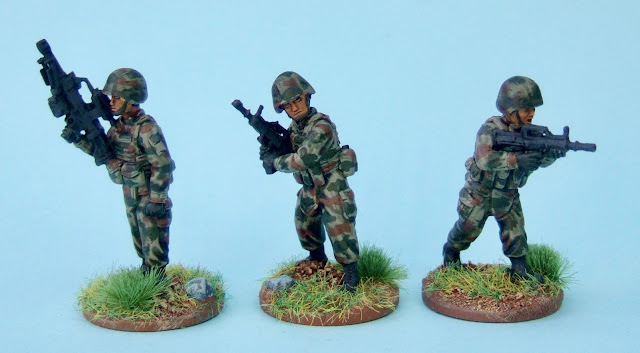 The squad (according to the rulebook) is made up of three 3-man cells, the first I have finished being the Heavy Support cell comprising of one man with a PF-98 120mm RPG and two with QBZ-95 assault rifles. 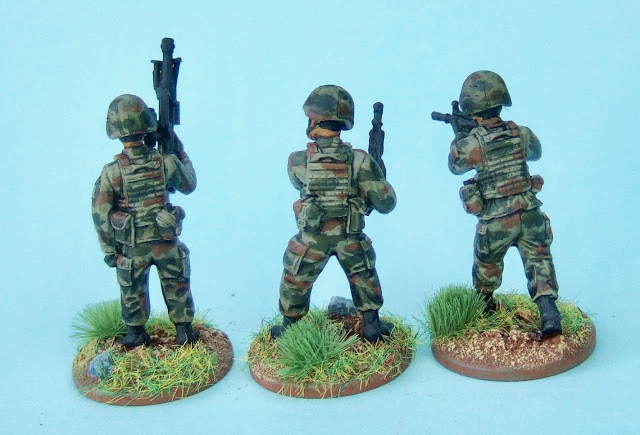 Painting any modern camo uniform is a challenge, not least the PLA with its computer generated dot matrix pattern, but having reduced some photos to 28mm high on the computer I was able to come up with what looks a reasonable approximation (Vallejo Stone Grey, Reflective Green and Beige Brown shaded with Army Painter Military Shader).

The figures do look nicer in real life, not quite worked out how to take decent photos of models painted up in camo!