The Men Who Would Be Kings: The Khandahar Field Force Exercises

A couple of weeks back George managed to arrived at BIG sans his natives. Fortunately I have amassed over 48 points of Imperial troops for The Men Who Would Be Kings, so as a bit of fun we decided to try out the game with two 24 point forces just to see how Regulars would fare against Regulars (with half an eye on Rebels and Patriots). For onlookers the sight of Brits v Brits was passed off as the Khandahar Field Force undertaking exercises!

First off we decided to run the Take The High Road scenario. We've played this previously with the defenders winning in two occasions and the attacker once. This time George was the attacker and I have to confess I had a wry smile as he found ordering his Regulars to move to be as much a chore as I have (especially those pesky Highlanders!). 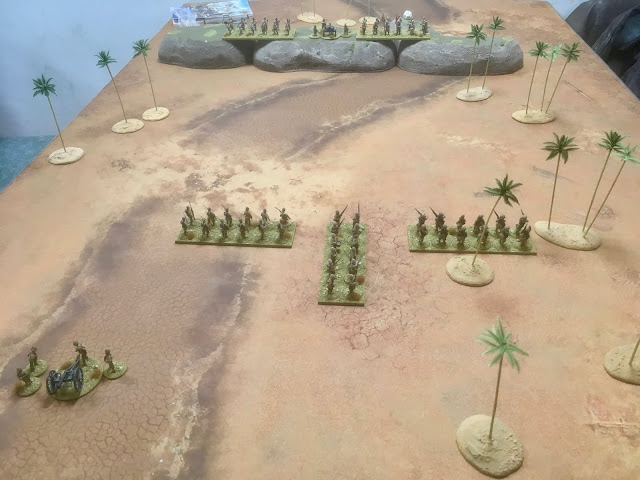 He took the cannon in his 24 points and proceeded to blast away at my defending force on the hill line. However as his troops advanced across the dusty Khandahar plain my troops proceeded to punch huge holes in his force, quickly destroying it. The game was over rather quickly and to be honest and demonstrated when not outnumbered Regular troops firing were very potent.

As that scenario did not last very long we then decided to try the Seek and Destroy scenario again which has proven to provide a close run game and did once again. 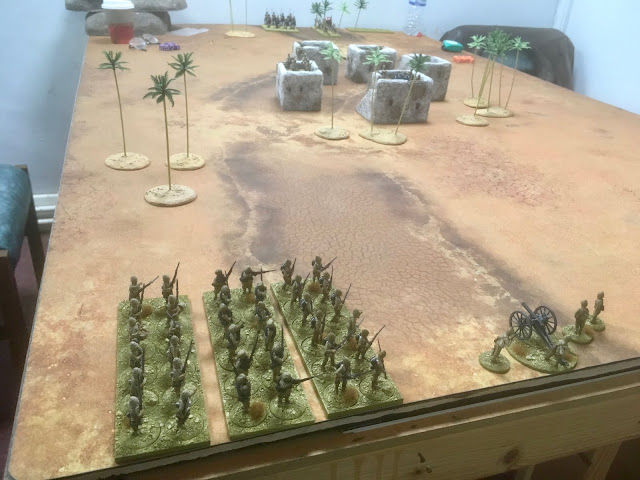 With his cannon pounding away at the village buildings I was loathe to keep any troops in them for any length of time as once a building takes 10 hits in the rules, it collapses taking out any unit inside with it.

My reinforcements largely obeyed orders to get up the table and support their comrades in the village the game swung back and forth and following the allotted 12 turns we totalled up the Objective Points to find my defenders has won by 10 points to 9.

Whilst we will normally be playing Regulars versus Natives our Field Force games did go to show that the rule system can provide a fun game even with atypical forces like we played with here - though advancing into a line of Martini-Henry fire is not recommended...
Posted by Steve at 11:31:00