The Men Who Would Be Kings: Far the Calling Bugles Hollo...

So as promised the refight of Take The High Road scenario from The Men Who Would Be Kings with George's stabby spear armed Mahdists taking the role of the attackers and my gallant sons of Empire the role of defenders.

For my 27 points I took three units of Regular Infantry, a cannon and spent the remaining 3 points on some Irregular Infantry Bazingers downgraded to poor shots. Would this be enough to stop the advancing 36 point Mahdist horde?!

We rolled up the terrain as previously and it was clear the wargaming gods were going to be against me as I ended up with a hill right in front of my position blocking lines of fire and some rough ground that would half the movement of any of my troops trying to advance onto the hill in front of them. 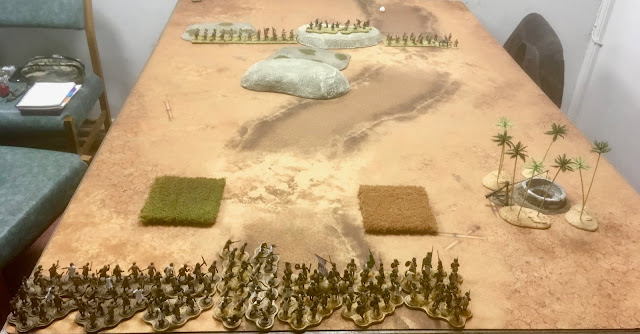 Unlike previously when I was the Attacker, George's Tribal Infantry do not have to pass an Order to Move and quickly started to advance up the table in 8" chunks. 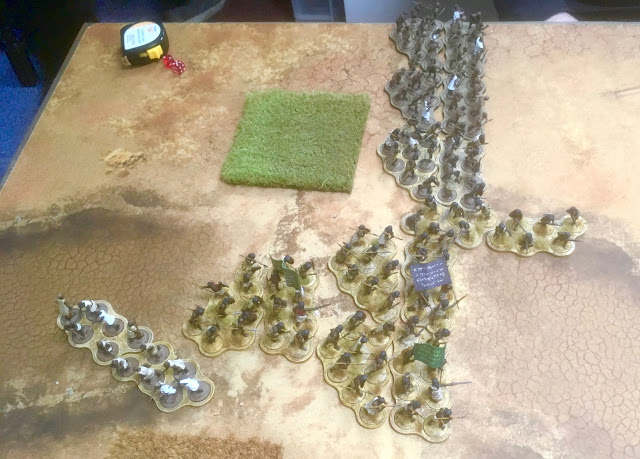 This did quickly bring them into artillery range and I opened fire on one unit of Beja killing two at long range. Unfortunately, they shrugged off the Pinning test. 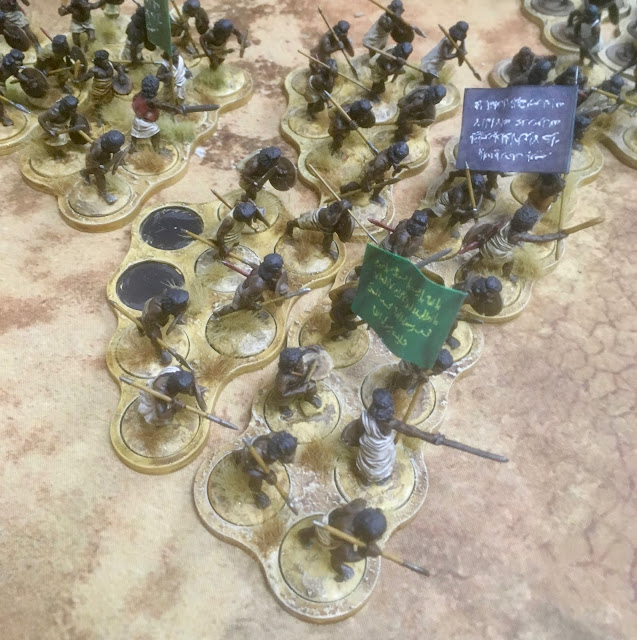 Unsurprisingly George was using the terrain to his best advantage to shield as much of his army as he could. That said his army has a lot of figures and it would have to be a very big hill to shield them all! 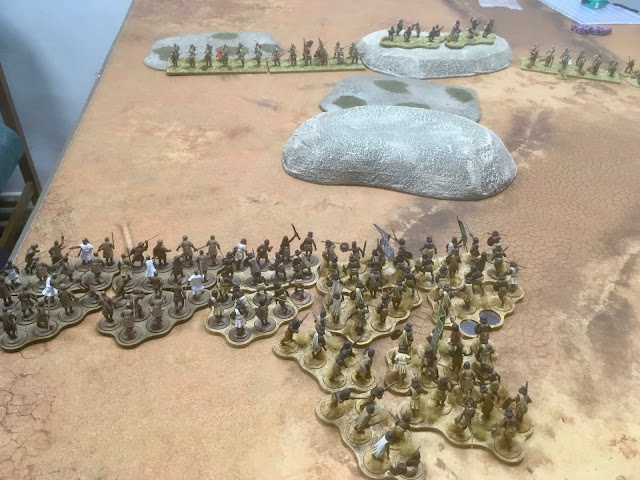 His left flank was soon in rifle range and the 1/66th and 2/66th opened fire inflicting several casualties  on a River Arab unit which was then Pinned and subsequently failed a number of Rally tests, effectively taking it out of the game. 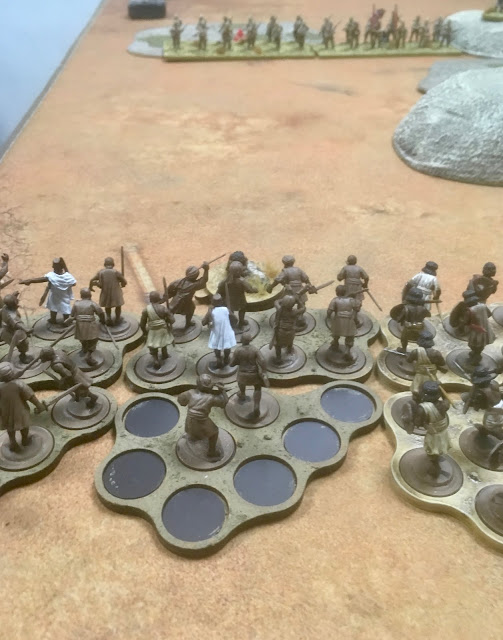 The Beja cunningly hid behind the hill whilst the other River Arabs continued to take casualties, another unit being Pinned... 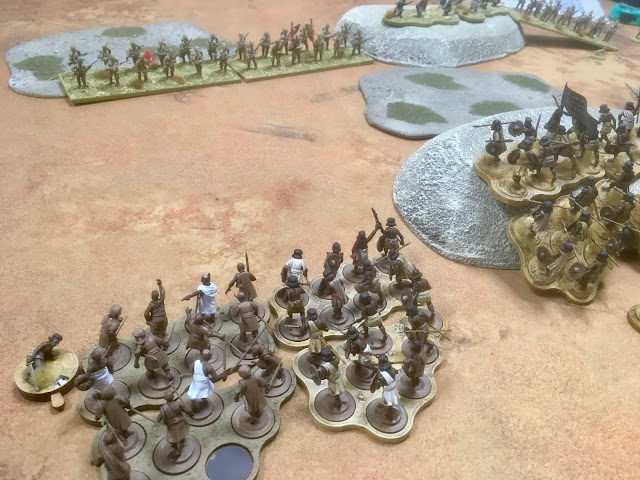 The remaining River Arab unit decided that being shot at wasn't much fun so decided to try and Charge in on the 2/66th. Some impressive dice rolling saw them move into contact! 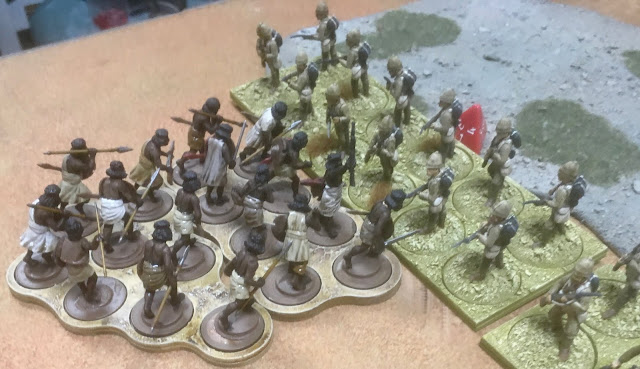 The 2/66th were fortunately in Close Order which limited the number of stabby sticks the Arabs could bring to bear and this also meant that the Thin Khaki Line was more effective in melee. The fighting was brutal with 8 Arabs being bayoneted but 5 of the 66th falling in combat. The Arabs were pushed back and Pinned. 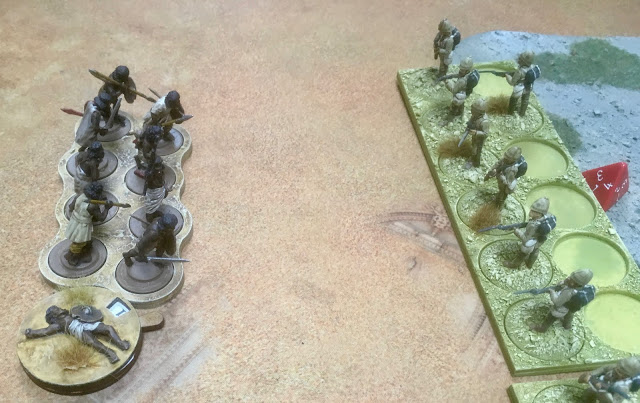 However this was a numbers game and as Tribal Infantry can move through friendly units even when charging, a unit of Beja decided to Charge in on the seven surviving 2/66th. Again their ability to bring their superior numbers to bear was negated as the British were still in Close Order. 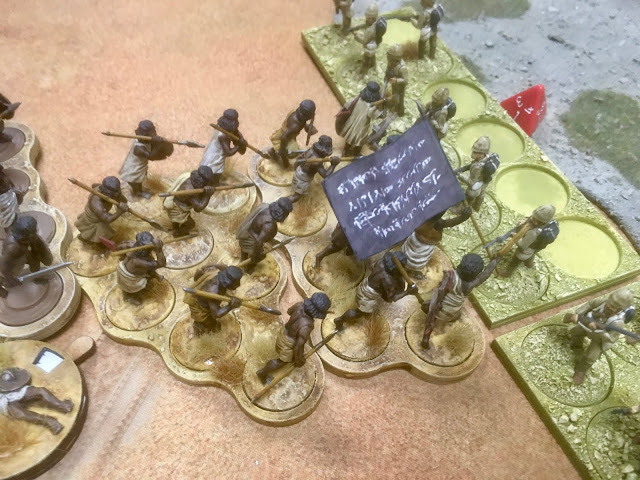 Unfortunately my dice rolling let me down at the crucial moment. George rolled 6 kills on 7 dice (!), whereas I managed just 3. The 2/66th were down to one man (their officer) who was pushed back and Pinned... 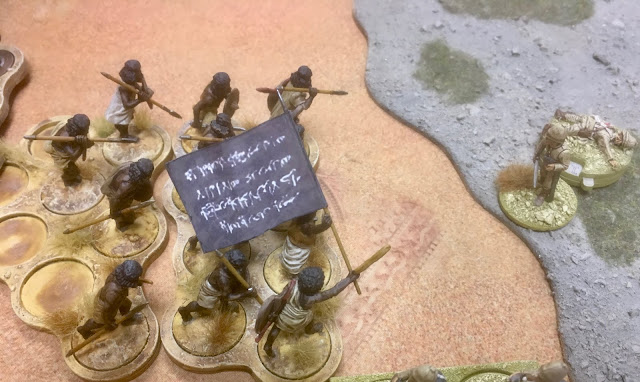 Whilst he Rallied next turn, the Beja charged in again and took this brave son of Empire down.... 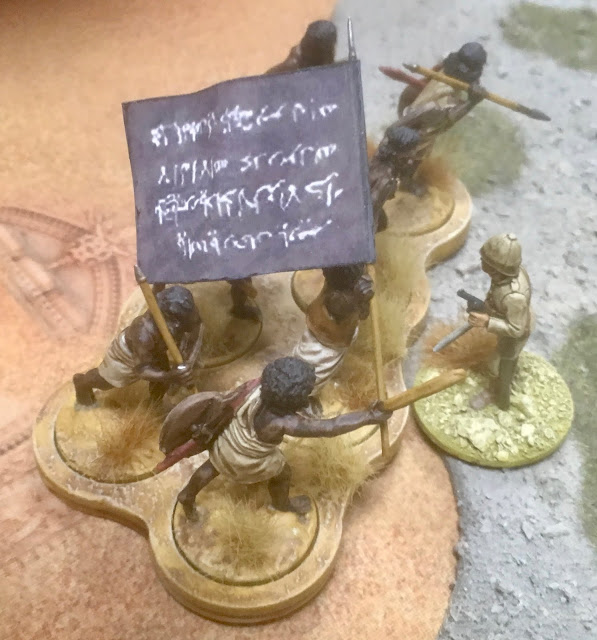 Meanwhile the 1/66th were having problems of their own due to my poor dice rolling. They volley fired at a unit of Beja that had attempted to charge over the hill at them, but had come up short. Twelve Martini-Henries killing on 4, 5 or 6 only managed to inflict just 4 casualties on the Beja who laughed off the Pinning test (George's Pinning roll tests throughout the game were almost invariably passed, much to my detriment). 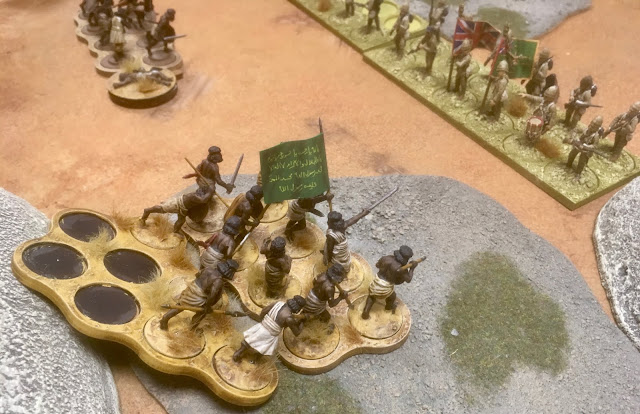 Faced with two units of Beja (one now of 12, one at full strength of 16) both potentially within Charge range, the 1/66th Volley fired again killing 5 of the nearest unit, who again shrugged off the Pinning test! 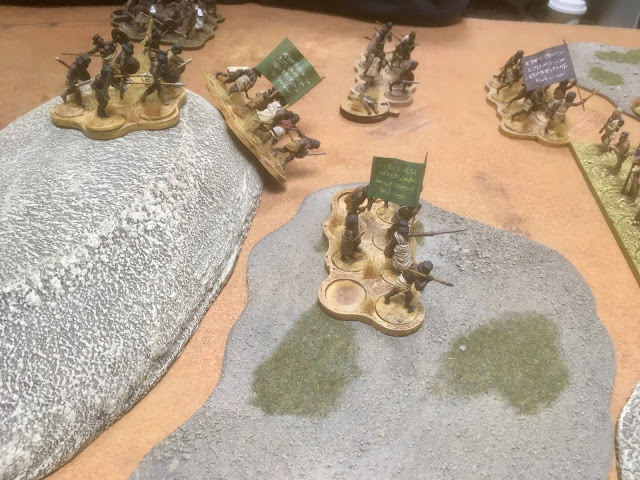 The second unit of Beja then attempted to Charge in on the 1/66th and successfully did so. Again due to the British being in Close Order the number of stabby sticks they could bring to bear was limited, so both sides has 12 dice, both killing on 4, 5 or 6. 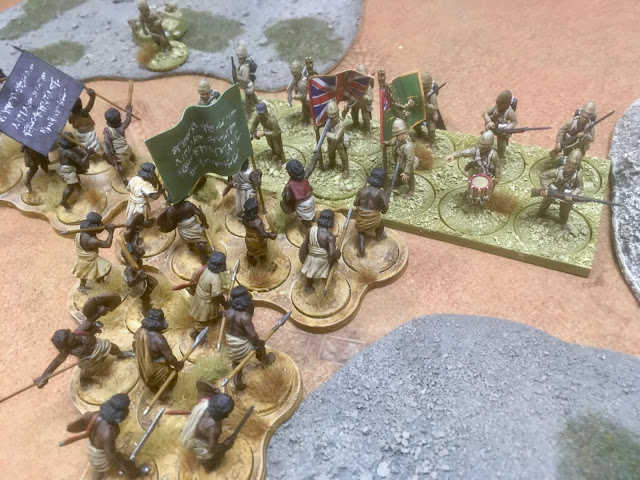 Fate deserted the 1/66th and me. The brave Brits took down 5 of their native foes, but the Beja killed 9! The 1/66th were forced out of Close Order, back three inches and Pinned! 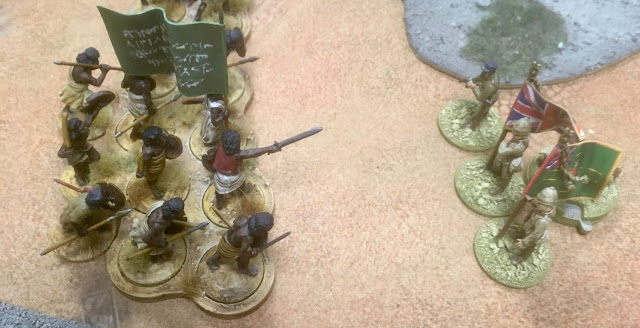 The Bazingers (who I had stationed on the hill as I had little hope of being able to order them to do anything than Fire which is a free order for them) tried to help the beleaguered survivors of the 1/66th, surprisingly shooting down 4 of the Beja, but failing to Pin them. 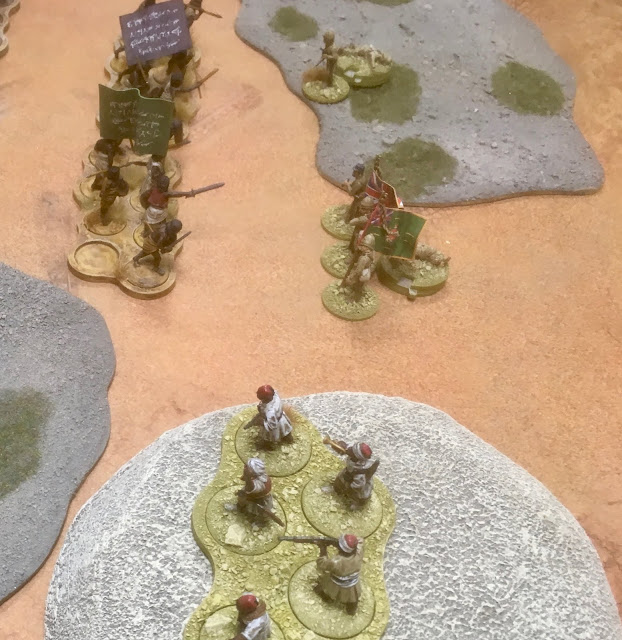 A unit of River Arabs then charged through the Beja, wiping out the last few of the 1/66th. The situation was now officially grim. 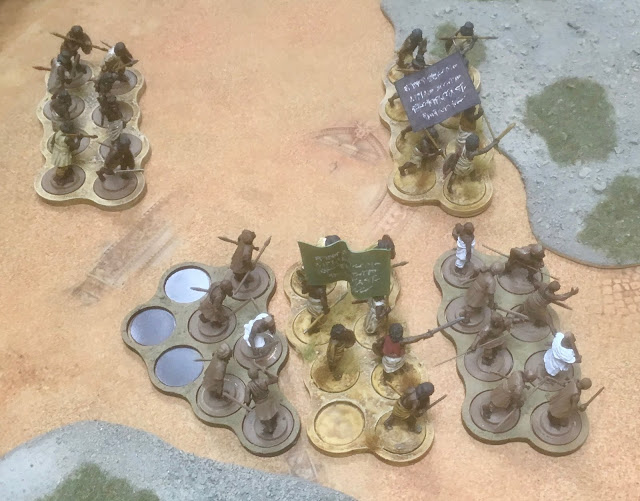 Next turn the Beja charged the Bazingers in an attempt to avenge their fallen comrades, killing 3 for no loss and forcing the Bazingers back down the hill. 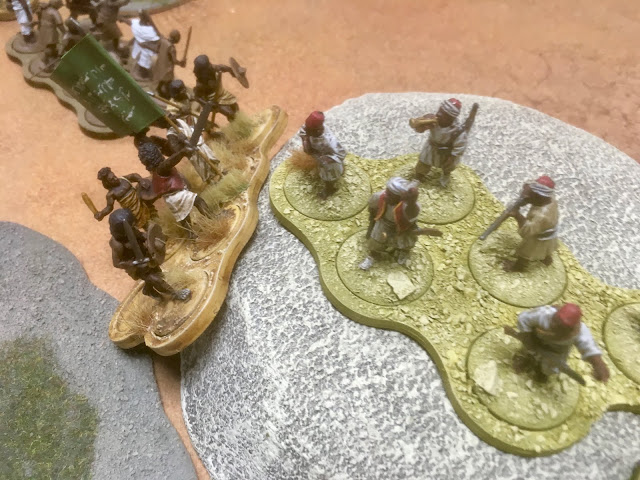 The River Arabs, their blood up after wiping out the 1/66th, then charged in on the remaining Bazingers killing 6, forcing them back and Pinning them. 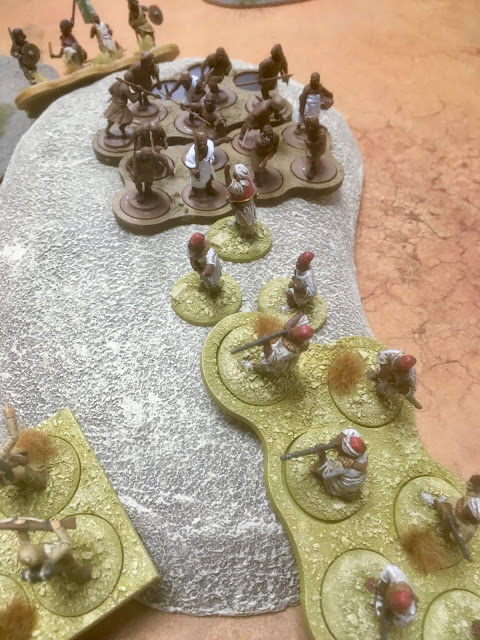 My final hopes laid with the 3/66th who were in Close Order and within Volley Fire range of the River Arabs. If I could inflict enough casualties on them, and use my cannon, which had been trying to pick  off two Irregular Rifle units George had slowly advanced down the right, I might be able to seize an unlikely victory, or at the very least a draw...

However my run of bad luck continued. The Mahdist Irregular Infantry got within Long Range of  the 3/66th and managed to inflicted one casualty on the British unit. My Pinning roll should have been easy but of course I rolled low and failed it!

The 3/66th were forced out of Close Order, Pinned and unable to shoot at the River Arabs standing brazenly atop the hill! 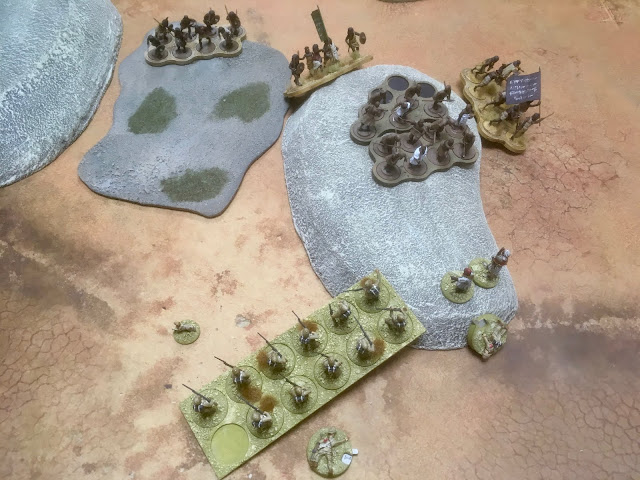 George's black flag Beja finished off the Bazingers which meant the remaining British units had to roll for Pinning which the cannon failed!

I managed to Rally the 3/66th but the respite was brief as he charged his River Arabs in on them. 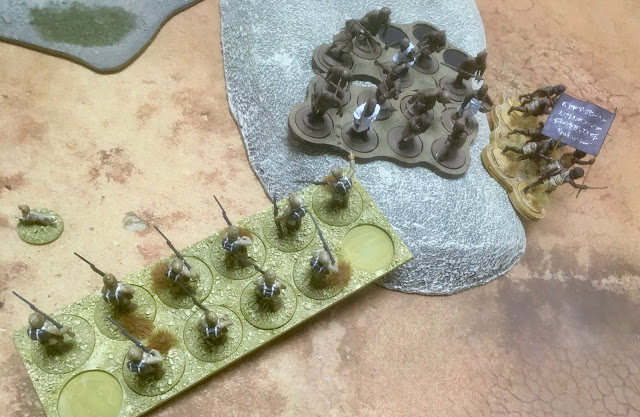 It was 13 versus 10 with the Brits only hitting on 5 or 6 against the 4.5 or 6 of the Arabs, but maybe a good roll of the dice would favour the British and see the Arabs pushed back so I could bring rifle fire to bear next turn.

As you can see below I managed no hits whatsoever whereas George rolled 7!

The remnants of the 3/66th were pushed back and unsurprisingly Pinned. 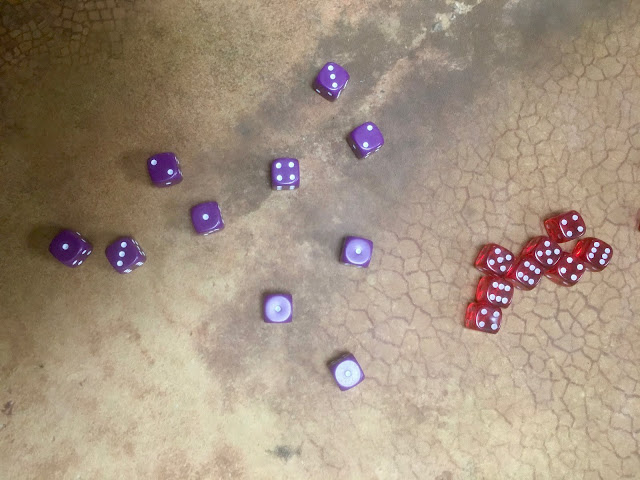 They did Rally next turn but the Mahdist Irregular Infantry inflicted another casualty taking them down to 2... 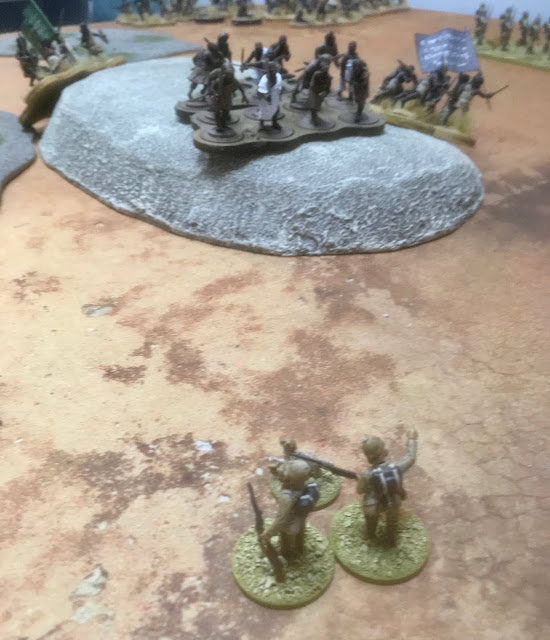 Before some Beja charged in... 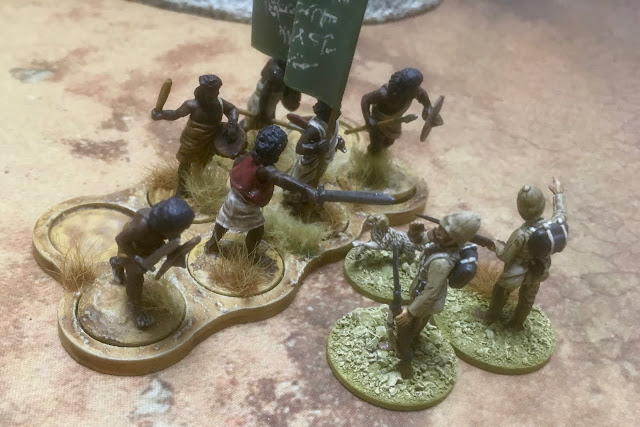 Finishing off the remnants of the 3/66th for no loss! 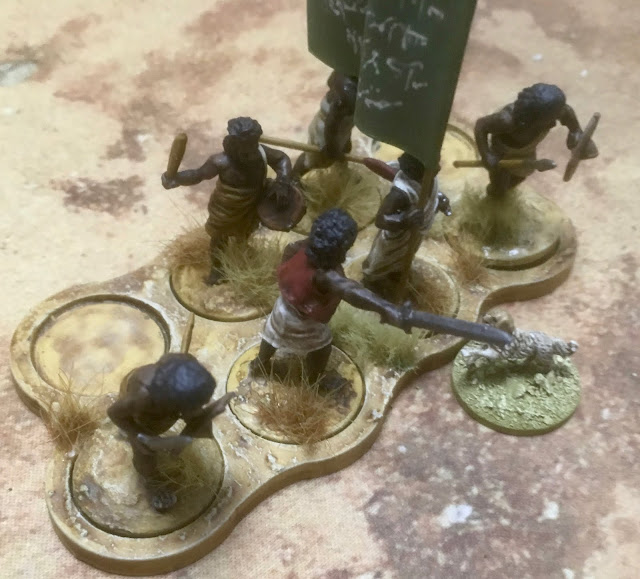 The black flag Beja then charged the Pinned cannon and you can guess what happened there... 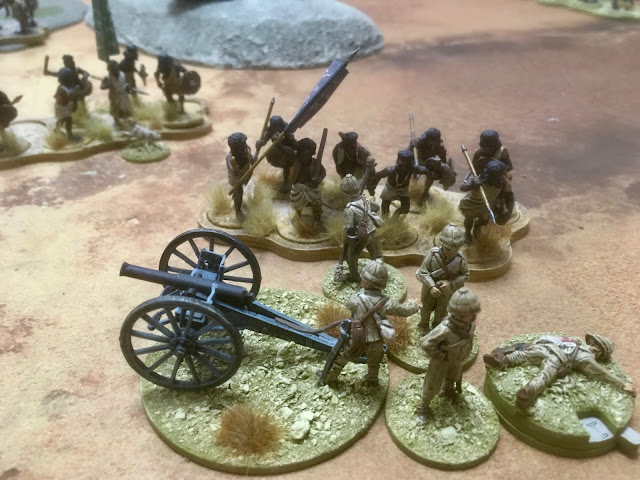 So, another sad day for the British Empire in the deserts of the Sudan...

Cleary the terrain had played an important role in the game with the second hill reducing my ability to bring all my firepower to bear. I should have agreed to George's initial suggestion we set the board up as per our previous battle using this scenario as I would have been able to deploy the cannon on the hill and had clear field of fire across a large area!

With a 36" range compared to the maximum 24" of the Regular Infantry the cannon seems to be an attractive option, but it only rolls 2d6 per crewman so maybe it would have been better to take another unit of 12 Regular Infantry with 12d6 to roll and put them in Close Order asap.

Deployment of units was impacted by the terrain. I had wanted to put the cannon on the hill objective but as it requires an order to Fire (unlike the Infantry units) I could not risk its crew refusing to Fire when they might only get one chance as the Mahdists burst out of cover in front of them.

Despite (another) defeat it was an enjoyable game, my dice rolling letting me down at crucial times and once things started to go wrong, as we have both noticed with the game, things began to unravel rather quickly...
Posted by Steve at 00:13:00