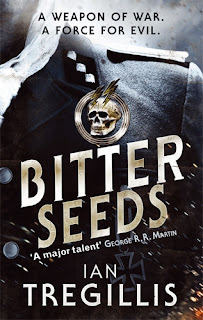 Alongside Andrew Salmon's book on British and Australian forces in Korea (see sidebar) I've been reading Ian Tregillis' Bitter Seeds, a novel set in WW2 pitting German and British supernatural agencies against each other. Of course this gets the old wargame brain thinking about gaming possibilities and whilst Weird War Two is popular enough, it has largely focused on weird science or horror, rather than dark magic (necromancy excepted).

Tregillis' book is not the only magically based WW2 media, Graham Masterton's Devils of D-Day and the end of Disney's Bedknobs and Broomsticks (see below) marry witchcraft and World War Two, albeit with different audiences in mind. There is also a reference in Harry Potter and the Deathly Harrows to a "global wizarding war" that parallels WW2 and sees Dumbledore defeat the Dark Wizard Grindelwald who, with army of dark wizards and witches attempts to create an international wizard empire.

Potentially some form of Hexekrieg game could be a lot of fun, perhaps drawing on myths and legends of the combatants. Something to ponder for another day methinks...