War in the Balkans: The Battle for Greece and Crete 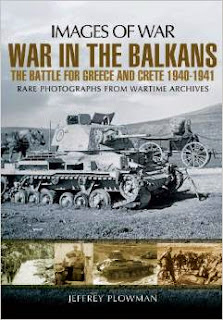 I've just finished reading War in the Balkans: The Battle for Greece and Crete 1940-1941 from Pen & Sword's Images of War series and found it really interesting. As a basic primer it is pretty decent and contains some really interesting accounts that could make for some great wargame scenarios. Whilst the Greek campaign was fairly one sided from a strategic level, there were a number of instances of German reversals at a local level that could be recreated.

The book is contains lots of photos, many unpublished. A lot are of broken down tanks (especially British ones!) but they are all of interest. Having bought the Kindle version, I found it useful to be able to enlarge the pictures on my iPad to see detail.

There are a number of interesting looking books in the Images of War series, many being quite cheap for the Kindle. I shall be exploring other volumes soon...
Posted by Steve at 21:17:00